“Our mission is simple. Violence the locals.”

The squad was set to move for Pure Blind on Saturday the 7th. This was a simple plan: bring a lot of stuff in a quick trip to the North and get kills.

The move op was impressive: several hundred dreadnoughts were brought from Delve to our new staging in less than one hour. 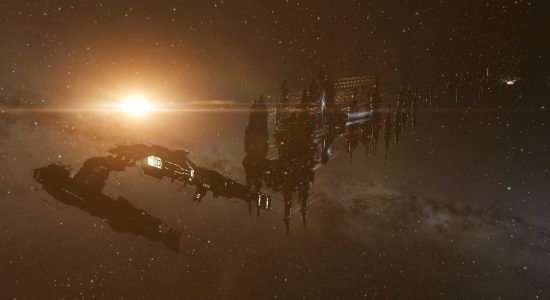 A part of the deployment fleet, image courtesy of Pittsburgh2989

On the way, several promises were made: there will be kills, there will be violence and there will be angry Kendarr memes. The squad was so happy that they even forgot to lose a dread to rats during the op (which would probably have made Kendarr bite his tongue on his last promise).

After quite an uneventful move, and the break between undeployment from Curse and deployment to the North, it was getting time for spreading proper Space Violence again.

Having been on the lookout for content, and noticing a nearby Athanor being attacked by some battleships, SV went to see if a third-party was possible.

A 60-man Retribution fleet headed to said system. As the enemies were fewer, a death squad of ten frigates was sent ahead, securing tackle on expensive targets bashing the structure. The rest of the fleet came in once the targets were locked down, and the fight quickly escalated.

The locals lit cynos, bringing in a small squad of varied capitals. With the initial 20 or so battleships, an additional reinforcement Gila fleet, and the capitals, the frigates were forced off-grid temporarily due to the incoming damage. SV leadership called for help, and friends answered: in less than ten minutes, the frigates went back in, a cyno was lit to allow for a capital force from Snuffed Out to join the party. The capital that had not yet left the field, a Ninazu, was disposed off, as well as a good part of the Gila fleet.

With the remaining enemy fleets pushed from the field, Snuffed Out and SV proceeded to bash what was left of the Athanor. In the end, 2.4B isk lost for 13.6B isk destroyed, and that’s just 3 hours after being deployed.

Now we need a feel for the Neighbourhood

That’s exactly what SV got later in the afternoon; a round trip of about fifteen jumps around their staging, camping a gate for a minute, fighting small gangs here and there, collecting over 30 kills doing so. Note that this BR might not be 100% accurate as it is spread over a large period of time and several systems.

Joining their friends and the fun in the North seems to already be a success for Space Violence. All that’s left to ask is what are you waiting for? Train a dread alt, and join SV!

“Locals think they can roam their own space freely. Not anymore.”