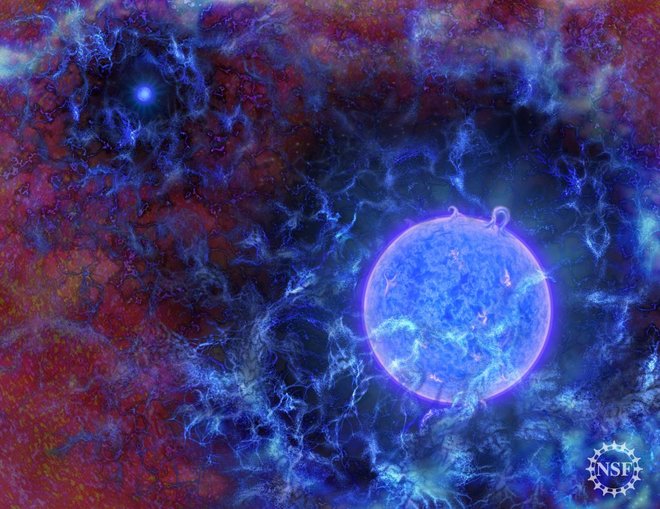 This time spacefans we have news about the early Univesre and the diversity of water!

As you all know, 180 million years after the Big Bang is one heck of a long time ago! So it’s a remarkable achievement to be able to find such faint signals from such ancient stars. The signal is a trace fossil left on the Cosmic Microwave Background (CMB) by hydrogen that absorbed some of this early light at a significant wavelength. The data suggests that the gas that made up the early Universe was colder than previously thought. This may be a sign of the presence of dark matter. Up to now, scientists have only been able to detect dark matter via its gravitational effects.

“This is the first time we’ve seen any signal from this early in the Universe, aside from the afterglow of the Big Bang,” says Judd Bowman, an astronomer at Arizona State University in Tempe who led the work, which is published in Nature1 on 28 February. “If it’s true, this is major news,” says Saleem Zaroubi, a cosmologist at the University of Groningen in the Netherlands. Other teams will need to confirm the signal but, so far, the finding seems to be robust, he says. “It’s very exciting stuff. This is a period in the Universe’s history we know very little about.”

“Finding this minuscule signal has opened a new window on the early universe,” said Judd Bowman of Arizona State University, whose team set out to make the detection more than a decade ago. “It’s unlikely we’ll be able to see any earlier into the history of stars in our lifetime.”

Part of the challenge is that we don’t exactly know when the first stars began to shine, plus the sky is swamped with radio signals from all over place, even the signal from the CMB is faint, so finding something fainter still is a challenge that has stumped scientists for years.

“The team have to pick up radio waves and then search for a signal that’s around 0.01% of the contaminating radio noise coming from our own galaxy,” said Andrew Pontzen, a cosmologist at University College London. “It’s needle-in-a-haystack territory.”

For the team doing the research, it took quite some time tweaking and redesigning their instrument to pick up this faint signal. When they finally succeeded, they were very surprised to find that it was considerably larger than they had anticipated, twice as large in fact. This lead to the conclusion that the Universe at the time was far colder than previously thought and that the hydrogen gas from this ‘Cosmic Dawn’ was absorbing more background radiation and giving it up to dark matter. More research needs to done, as delving into the mysteries of the early Universe will inevitably bring more surprises.

WATER ON THE MOON MORE WIDESPREAD THAN PREVIOUSLY THOUGHT

Contrary to previous studies, which indicated water was primarily located at the poles and waxes and wanes over the course of the month, a new study suggests that it is always present, but not necessarily accessible.

“We find that it doesn’t matter what time of day or which latitude we look at, the signal indicating water always seems to be present,” said Joshua Bandfield, a senior research scientist with the Space Science Institute in Boulder, Colorado, and lead author of the new study published in Nature Geoscience. “The presence of water doesn’t appear to depend on the composition of the surface, and the water sticks around.”

Scientists hope that these new findings may help in our understanding as to the origin of the Moon’s water, which in turn could help in  our understanding of the origin of water on Earth, which remains a mystery to this day. Another way this is important is for future manned missions to be able to utilize this water for drinking, or oxygen for breathing or for fuel. Up to now it has been assumed that water molecules would stay in a cold trap where they can remain for billions of years. 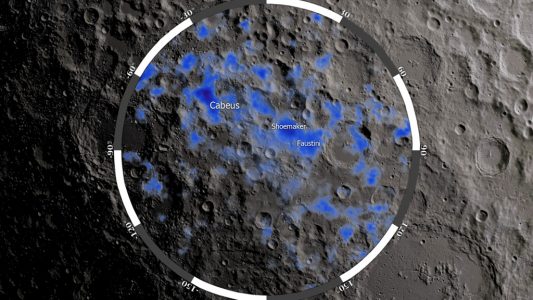 If the Moon has enough water, and if it’s reasonably convenient to access, future explorers might be able to use it as a resource. Image credit: NASA

Bandfield’s team are using data from remote sensing equipment, primarily the Lunar Reconnaissance Orbiter (LRO) to look for fingerprints as to its presence. As for the accessibility problems, this is due to the form this water takes, it is likely that rather than the H20 we are used to, that is comes on the form of hydroxyl atoms, these are more reactive and likely to be bound by minerals, making extraction difficult as its not just lying about on the surface.

“By putting some limits on how mobile the water or the OH on the surface is, we can help constrain how much water could reach the cold traps in the polar regions,” said Michael Poston of the Southwest Research Institute in San Antonio, Texas.

The Moon’s water remains a mystery for now, but every new clue helps!

Staying with the water vibe:

The enticingly named WASP-39b is an exoplanet 700 light years away.  WASP-39b is a ‘hot Saturn’, a gas giant with lower density than more typical ‘hot Jupiter’-type exoplanets. However, this one has three times as much water as Saturn meaning its formation must have been very different. Its water content suggests that it formed much further out in its solar system than its current position, past the ‘snow line’ like gas giants in our own system, where it would have been bombarded by icy bodies unable to resist the lure of its gravitational field. Gas giants have a habit of going walkabout and often end up as hot Jupiters and leaving a trail of destruction in their wake as they obliterate and evict smaller bodies in their way.

“We need to look outward so we can understand our own solar system,” explained lead investigator Hannah Wakeford of the Space Telescope Science Institute in Baltimore, Maryland, and the University of Exeter in Devon, United Kingdom. “But exoplanets are showing us that planet formation is more complicated and more confusing than we thought it was. And that’s fantastic!” 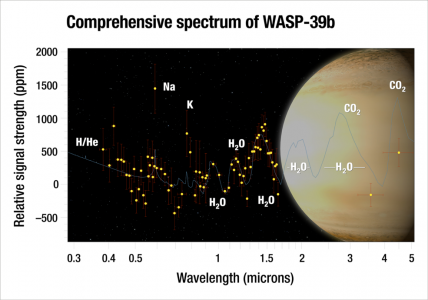 Using Hubble and Spitzer, astronomers analyzed the atmosphere of the “hot Saturn” exoplanet WASP-39b, and they captured the most complete spectrum of an exoplanet’s atmosphere possible with present-day technology. By dissecting starlight filtering through the planet’s atmosphere into its component colors, the team found clear evidence for water vapor. Although the researchers predicted they would see water, they were surprised by how much water they found – three times as much water as Saturn has. This suggests that the planet formed farther out from the star, where it was bombarded by icy material. Credits: Artist’s Concept: NASA, ESA, G. Bacon and A. Feild (STScI), and H. Wakeford (STScI/Univ. of Exeter)

Using Hubble and Spitzer, the team has captured the most complete spectrum of an exoplanet’s atmosphere possible with present-day technology. “This spectrum is thus far the most beautiful example we have of what a clear exoplanet atmosphere looks like,” said Wakeford.
“WASP-39b shows exoplanets can have much different compositions than those of our solar system,” said co-author David Sing of the University of Exeter in Devon, United Kingdom. “Hopefully this diversity we see in exoplanets will give us clues in figuring out all the different ways a planet can form and evolve.”
WASP-39b whizzes around a star much like our Sun, called WASP-39, with it’s ‘year’ lasting four days. The exoplanet is very close to its star so is tidally locked with a puffy atmosphere due to it’s sun’s proximity heating it up. Its day-side temperature is a very toasty 776.7 degrees Celsius. It has strong winds which transfer heat from the day-side around the planet, meaning that the permanent night-side is nearly as hot. It is not believed to have rings like Saturn however.

In the future,  Wakeford hopes to use the James Webb Space Telescope, due to launch next year,  to get an even more detailed spectrum of the exoplanet. The new telescope will be able to give more detailed data regarding the planet’s atmospheric carbon, which absorbs light at longer, infrared wavelengths than the Hubble telescope can see. By understanding the abundances of carbon and oxygen in the atmosphere, scientists hope to find out more about the planet’s early history.

That’s for for this time spacefans, see you soon!