On patch day, while most players were busy testing their new capitals, or racing around to buy building products for new citadels, a small group of finance experts were watching the Jita market. Seemingly overnight tens of thousands of orders for PLEX had entered the market, all at the same 950 million ISK price point.

Whispers of CCP injecting a “wall of buy orders” to support the PLEX market from crashing began to circulate. PLEX sitters launched into a full blown panic. Massive selling created a run on PLEX, as the stable “gold standard” for EVE dropped into freefall. When the wave of selling approached the PLEX price wall, angry rumors erupted from players, accusing CCP of artificially buoying the price. Most players want low PLEX prices to pay for account time.

EVE once had a full time economist that monitored and occasionally tuned the market, but has since departed from CCP, and the markets were left to govern themselves. This looked like a CCP attempt to control the markets. CCP Quant appeared on reddit to wave off speculation about the PLEX price wall. No, CCP was not involved.

It turns out, the price wall was real, but it was not CCP that did it.  Nor was it done to stop the price of PLEX from falling too low. It was completely different. A lone-wolf investor, with a modest wallet, and one big idea. This is his story, in his own words:

So, before anything else, the 17 trillion ISK of PLEX buy orders up on the market are only a fraction of what I was actually intending to put up. With all my ISK, I would have set a buy of nearly five times that. With the maximum amount of ISK I would have accepted as a loan, I would have gone with ~300 trillion. The day before the patch, I was being offered enough ISK to do ~1200 trillion. Had I gone through with that latter offer, that would’ve pushed the volume of traded PLEX up to about 280,000 units for April 27.

Now that would have been a story.

Let me start at the beginning. Two weeks before the patch hit, I set a new long-term goal for myself in Eve, one which I needed 750 billion ISK more to achieve. A week before the patch hit, I decided I didn’t want to wait 10 months to make that money, so I started brainstorming ideas in the shower. It just so happened that the Citadel patch included a method of multiplying all liquid ISK by 6x.

As most people know, market taxes increased in Citadel (expansion). Broker’s fees were the important change for me. Originally they were supposed to go from roughly ~0.25% for a 9.0-standings trader, to just over 3.5%.

First important piece of information: you could set up buy orders pre-patch at the 0.25% broker’s fee, which would allow you to avoid an additional 3.25% fee post-patch. Many people did this across the market. But in the end, this only multiplied ISK by 3%, and you would also have to actually want the things you were setting up buy orders for.

Second piece: Margin Trading V means that when you set up an order for 100 million ISK of items, you only have to put 24 million ISK – 24% – into escrow. So now you’re up to a 1.12 multiplication factor, still without a decent way to cash out.

The third piece, and the first thing that apparently no one else realized: when combined with the Margin Trading skill, the escrow mechanic works badly in Eve (though to be fair, no mechanic in Eve plays nice with Margin Trading). For that 100m order, you only put up 24m as escrow. After 10m of it has been filled, you now only have 14m stuck in escrow, instead of the expected 21.6m. After 24m of it has been filled… there is no more ISK at all stuck as escrow.

It turns out, this actually allows you to scale the first and second pieces very highly. You have one billion ISK in your wallet. You set up a 1Bl buy order. You wait for 240 million of it to get filled, and you take that 240m of items you now have in your inventory and unload them somewhere.

You now have 997.5m in your wallet and a large buy order on the market. You rinse, you repeat. Congratulations, you have spent your entire wallet paying 0.25% broker’s fees and have nothing left should anyone actually decide to sell to your orders. On the bright side, you have avoided paying 3.5% broker’s fees post-patch. So from that point of view, you’ve now multiplied your ISK by a factor of 14.

There is one additional problem to that method however: you have to wait for people to fill your buy orders. Now, if you only think of this a week before the patch, there simply isn’t enough daily volume on the Jita market for you to be able to actually abuse this properly. Which leads to…

The fourth important piece of information: you can sell to your own sell orders. When you do so, you pay a 0.75% sales tax.

Let’s assume you have 1T, and PLEX costs 1B, because they’re round numbers. Put together, here’s where we are right now.

Obviously, cashing out is a big problem. Long story short, there is a portfolio of items whose Jita margin stays constant, near the value where buy-low -> sell-high stock flippers barely make any profit. Whenever the margin goes low enough for profit to become 0, everyone stops 0.01ISKing orders and leaves the market within 15 minutes. The poster-child of this category is PLEX.

All that needs to be done then is to set up sell orders across a diverse spread of these items and undercut profits into the negative. If you were to capture the entire market of these items, you’d burn out. You’d also be able to cash out ~200B / day out of your ISK multiplication scheme.

Back to analysing market data and remembering from experience, then. What you get out is that if you’re online for 2.5 hours a day (EU and US market peaks), you can capture about 66B / day. Assuming a 6x multiplier (changed from 7x to 6x so that there’s room to undercut), what ALL of this boils down to is a method that, for a pre-patch investment, allows you to make 20B/hour post-patch. That’s quite the ISK-per-hour. Still a disappointing cash-out method since you have to log into Eve, but it’s slightly better than running incursions.

One addendum to this story: during Fanfest, it was announced that the broker’s fee changes weren’t all happening in the Citadel patch. Instead of rising to 3.5% immediately, minimum broker’s fee would go to 2% in the patch, and would be again increased at some later time. This means two of the important numbers above are halved. Instead of a 6x multiplier, I was left with a 3x multiplier. Instead of 20B/hr, I was left with 10B/hr. 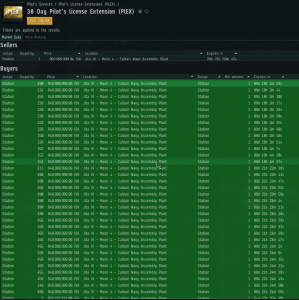 I figured all this out a week before the patch. With hardly any time left before patch, I thought there were basically two options: shitpost about it pre-patch, annoying people with unhelpful hints, and then smugpost about it once the patch hit; or, make a serious effort to get other people on-board. I was heavily leaning towards the former until I was approached by a couple of people who saw potential through my shitposting and encouraged me to treat it more seriously. Unfortunately, I took their advice.

Fast-forward to the last day of the patch. For the last week I’d been sifting through PMs, replying politely, even when it was obvious that almost everyone messaging me was not in the least interested in investing, but just using that as an excuse to get more information out of me. This was the last day before the Citadel patch, and even with my having contacted Chribba and confirming that he would be willing to 3rd party, people showed no interest in finalizing any agreements.

So when one last person said “Ok, let’s shake hands on this thing… but first, I changed my mind, and despite all the safeties we’ve been putting in over the last hour, you HAVE to tell me what your method is.”, I rage-closed all my conversations, rage-napped, rage-snoozed my pre-patch alarm, and rage-woke-up with only one hour left to set up buy orders before the patch hit. And that’s how another smart idea was completely wasted.

Shout-out to May Darkb for actually being a nice and genuine person. Mail all your lossmails to probag Bear, and I’ll reimburse them at 100%.

Shameless advertising: there’s one thing I mathed out a while back that I haven’t found a way to apply. I can bring the manufacturing cost-index of any system in Eve for only about 2-3B (on average). Shoot me a mail if you’re interested. I’ll give you a discount if you want to fund a cool idea like bringing every system within 5 jumps of Jita up to 10%.

Editor’s Note: This story comes to us from probag Bear. It is an interesting note that manipulation of corporate wallets and buy orders through the Margin Trading skill at level V is the basis of a fairly profitable scam. The intro was written by Matterall for added context. More information on this can be found on Talking In Stations show (#8), where it was discussed.