Last week, CCP announced that Aurum and PLEX will be changing, as we covered in an article here.

There have been a lot of passionate responses to this change on Reddit and the Eve-O forums since the announcement was made, and CCP Rise popped into Talking in Stations this week to discuss the changes in more detail, it is well worth a watch, so check it out at the link below, or on the podcast
Watch live video from ImperiumNews on www.twitch.tv

Outside of the points raised on Talking in Stations, there have been some issues raised that I want to briefly go over.

The first is the comment that was made in Twitch chat, and I have seen made in several channels over the past few days.  That there was some sort of CSM/CCP leak that caused a spike in PLEX prices prior to this announcement.  This was addressed by Lockefox in Open Comms on Friday night, and I just want to go over it in a bit more detail here.

First of all, this is what people have been talking about: 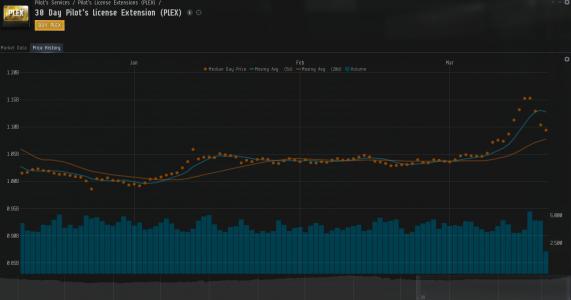 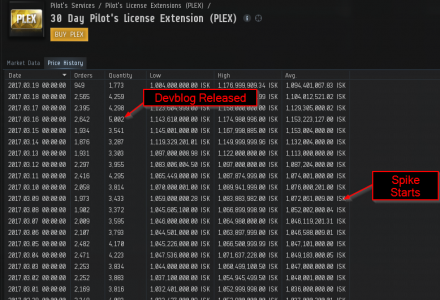 This was noticed by people at the time it happened

The rise in price was seen after the devblog released as evidence for some sort of CSM leak, that is, people thought that someone on the CSM had taken advantage of knowledge about the PLEX changes to profit.

The problem with this hypothesis is that, well, the price spike was due, as EveProsper says, to a lack of supply.  If someone was manipulating the market, there would have been an increase in the volume traded, and there wasn’t.  Instead, on the right-hand image on the tweet above, it shows the number of sell orders as the blue line in the bottom half of the graph. 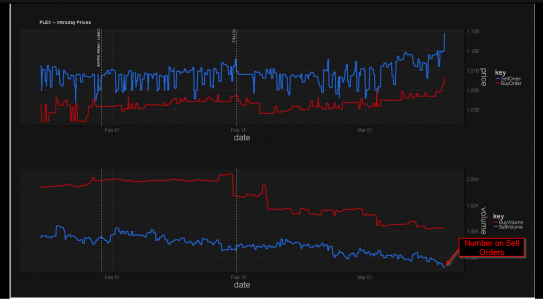 Chart from EveProsper, showing the number of PLEX on sell and buy orders

Another site for market information is adam4eve and the information there shows the same pattern as the EveProsper data shown above. 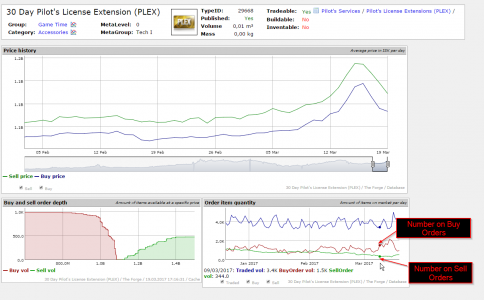 The thing to understand about price rises is they are caused by one of two things.  The most obvious is an increase in the volume of items sold. This is what we see when someone buys out the market, or when a big change is announced that causes people to buy an item, or when a big fight happens and stocking up/replacement happens.  This is what most people assume has happened when a price suddenly changes, that supply has remained the same, and demand has increased.

The other reason a price suddenly changes is if demand stays the same, but supply is altered.  This is what has happened with PLEX in the run up to the dev blog being released.

PLEX are often on a knife-edge, right now in The Forge, it would there is 523 plex between current price (1.11b) and 1.2b.  523 sounds a lot, but, the daily volume in The Forge is around 4000 units. The spike people saw was an increase of 20m in 1 day. There are 132 PLEX between current price, and 1.13b, which would be a 20m increase.  What this means is, that if 132 PLEX for whatever reason, didn’t make it onto the market, and demand continued as normal, then the price would increase by 20m.

There are many reasons why a small amount of PLEX might not make it onto the market and cause a spike.  It happens on many items (we had orcas suddenly go over 1b late last year, and 6 weeks or so after citadels came out, empire ran dry of a mineral due to supply not matching demand over a period of weeks).

There is a bump in Extractor volume on 10 March, and again on 12 March, but these are nothing out of the ordinary, and happen periodically (on February 25-26, February 17, February 8 for example).  Previous bumps in volume have not caused a spike such as we saw last week, which indicates supply was especially low.

The chart below plots volume for Extractors and PLEX for the same period as the average price was plotted.

In any case, if there was any suspicious market activity, it would be reflected in volume, not a few players withholding PLEX.

There is one rather large potential issue regarding the PLEX changeover.

In the dev blog, it states

Q: What will happen to existing market orders for PLEX when the feature launches?
A: We will cancel all orders and repay fees, as usual when we make a major type conversion.

When this happens in an NPC station, you have paid your fee to the Secure Commerce Commission, and so CCP refund the NPC fee that you have paid.

In a Citadel or Engineering Complex, however, the situation is somewhat different.  You pay the broker fee to the owner when the order is placed.  This creates a problem when CCP refund the fees.  You have paid ISK to a player, but, CCP cannot take ISK from player wallets to refund these fees – what happens if a player does not have sufficient ISK in the corp wallet?  Does it go to negative?

If CCP refund the ISK without taking it from the player wallets, they will have to inject ISK into the game, which is not going to happen.  That would leave the way open for people to set up a citadel, set fees to 100%, and then wait for CCP to refund the fee.

One suggested option is that CCP only refund fees in NPC stations, but, this comes with its own set of problems, as, at least in The Forge, a large number of PLEX orders are in citadels (and in Sov Nullsec, all PLEX orders will be in Citadels).  This would mean players who are using these structures to list PLEX orders would lose out on refunds unless they move their orders to an NPC station. For buy orders, this is not really an issue, as it is a simple case of cancelling the order and moving to the local trade hub.  For those who have sell orders up however, it requires them to either pull their orders down just before the change happens (assuming they are online) or move their PLEX into an NPC station to list instead.

The refunds only in NPC stations seems to be the best way for CCP to handle the changeover, as there are other concerns in citadels as well, relating to the changeable broker fee that can be set by the owner.

CCP have been given feedback on this (it has at least been mentioned on the forums, and feedback has been given to the CSM to pass on), so hopefully, we will get clarification on this issue soon.

Update: Today CCP released an update on the PLEX conversion, which you can read here. The relevant paragraph in it for this article is shown below:

Last week we mentioned that active market orders for old PLEX would have their brokers fees refunded during the conversion. The CSM was kind of enough to remind us that in Citadels, brokers fees are paid to the Citadel owner, meaning that if we refund fees in Citadels we create a nice ISK printing machine for wealthy players. While following up on this, our team discovered that we don’t actually have the ability to refund fees at all. In EVE, fees are paid as a transaction when an order is placed and not tied to the order itself. This is one of our team’s first “type” conversions and we were simply confused. Sorry for that. Hopefully, with adequate warning, orders can be set up with release date in mind to minimize wasted fees.