Rewatching yourself FC EVE is pretty unimpressive. You get the sense of “is that it?” and “it seems like anyone could do this”. Most FCing is like hiring a plumber. You aren’t paying for him to turn a wrench and replace a pipe in a few minutes, you are paying for all the experience and training that let him do it easily in a few minutes. Actually leading a fleet is usually a matter of following rules you established for yourself because of past experience or someone else sharing some experience with you. You then make adjustments on the fly based on conditions but these can often be minor enough that if you weren’t actually narrating your thoughts it probably wouldn’t be terribly obvious what you had changed.

What you don’t see when re-watching is all the prep work that went into a fight, either hard-won experience or groundwork laid through preparation for a specific fight. This is especially true when you are fighting directly under your enemy’s supercap umbrella. For some times now, the Imperium’s USTZ Reavers and Black Ops have been doing just that in the north: fighting under the GOTG super fleet umbrella. Every mistake is magnified because the Sword of Damocles always hangs over your head. You are forced to play EVE with your senses sharp.

Even playing against the enemy’s home field advantage there are still many variables. One major concern when you are trying to bait out an enemy drop on your terms is the amount of coordinating that goes on. The work of getting the various disparate groups involved in this kind of dreadbomb on the same page, ready to go at the same time, is immense. Once you get everyone on the same page, at the same time, capitals ready, cynos in place, all undetected by the enemy, you still have to hope the other side shows up, or all your prep work is for naught!

Some of the Imperium’s USTZ SIGs have been deployed north since October and although we had already killed one titan and many supers, we saw an opportunity to go after a serious portion of the GOTG’s USTZ fleet. After consulting Deployment Skymarshall BigBillThaBoss3 (who originally conceived and pushed the northern deployment) we started maintaining a spreadsheet of what occasions GOTG would use supers compared to just regular caps. This was much like when, in the Querious campaign against Darkness several years past, the Reavers SIG maintained a spreadsheet of pilots who lost the most T3s and preferentially targeted those who had lost the most skillpoints for further pain.

We started having a pretty good feel for what occasions GOTG would use supercaps (who had to be online) and in what circumstances. However, we were in a holding pattern waiting for them to kick it into high gear. Luckily, we were gifted a chance when GOTG alliance leader Sort Dragon made a now-deleted tweet claiming that being an alliance leader was a “thankless job”. This was despite crowdfunding a gaming chair, two high-end gaming PCs, and strangely, a tooth from his alliance. This propaganda most assuredly put Sort on the defensive. It was at this time that Deployment Skymarshall BigBillThaBoss3 suggested we start a campaign to point out factual statements that Sort Dragon would find frustrating. This could include things like the aforementioned crowd-funding, or the fact that his alliance is supposedly the leader of GOTG but has been surpassed by Slyce in member count (and arguably skill).

Around the same time, I decided that we needed to feed a bit to Sort’s super fleet when he used it to provide him with a powerful outlet to express his frustrations at being publicly shamed. The plan was put in place to beat subcaps (this has never been an issue on the deployment, only when Horde was there and they were outnumbering us by up to 5x did they ever come close to winning sub-engagements. GOTG alone in USTZ usually only outnumbers us two-to-one). For caps we intended to run, giving them no satisfaction for just using caps (this proved harder than expected sometimes as we would win hard even with their cap advantage). Against supercaps, we would dutifully feed some ships.

The Birth of Pavlov’s Dragon

When GOTG did what we wanted we rang the bell by flying right into their fleet and feeding some. When they didn’t we worked to our best capacity to win (we didn’t always succeed). Still our overall pattern was established and we saw them using their fleet in a way that encouraged us to think we could set a date.

The actual coordination is mostly a boring affair of getting everyone on the same page, assuaging fears and encouraging participation. Luckily out of everyone contacted most people were very interested and only one group demurred.

When the actual fight came we had so many people prepped, dozens of cynos, FCs from various groups in a room called The Black Order (named after the comic book enemies of the Guardians of the Galaxy) that the initial action seemed inconsequential. I was little-focused on the grid and listening to reports of their numbers. When they brought in their titan group we watched them bump a handful of ways with a core group in the center and two wings on either side of large bumps. We burnt at an avatar that had bumped 100km off and threw a bubble on him. We had not even shot him with our ishtar fleet before he lit a cyno and almost the entire compliment of GOTG faxes came in far off the main force: 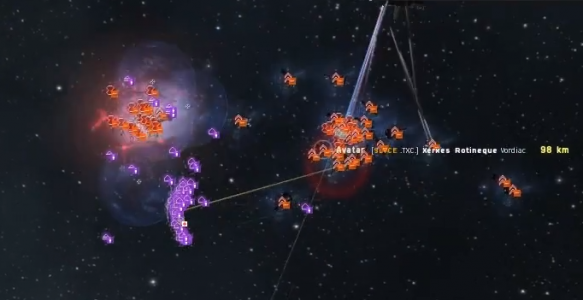 Guardians of the Galaxy Faxes come in on a lone Avatar, well to one side of the main body.

When I told Jay this on command comms, he thought I couldn’t be serious. How had a subcap fleet forced a commitment like this when surely one or two faxes would have easily held? Still, we weren’t about to look a gift-horse in the mouth (or a gift Avatar in the port). At this point we were deciding on final go/no-go and I called for Init to make their move into final position while Snuff was already in place. We burnt over to the other side of the titan grid and began bringing in the dreads.

As I said at the beginning, thinking back on the actual fight it was mostly rote. We had some discussion on targets and what order to call them but by the point we were in it was already in the bag. The fight was won in the planning over the months before.

On a personal note this makes me two for three in massive dread bombs. I’ve killed defenseless titans before but it feels like the EVE equivalent of hiring a professional to sleep with you, versus going out to a bar and pretending you are an interesting person like God intended. One is much more exciting than the other. The opportunity to kill titans in combat is relatively rare; people usually only field them when they think they have a guaranteed dunk. Things closer to 50/50 usually result in both sides being gun-shy as witnessed during the 9-4 keepstar final timer. We can only hope that CCP will come up with more ways to encourage people to be in space away from tether with supers and titans in the future so that these kind of fights can happen more often.