“I am Olivia” Suicide Scam Exposed

The first casualty in EVE is trust. Scam artists infest EVE marketplaces, shadowy agents infiltrate corporations and alliances, and sometimes relationships shift and even trusted comrades go rogue. Recently, the EVE player community was confronted by a situation that went far beyond the game itself. News that a player had reached out for emotional support and was bullied by other players into a suicide attempt shocked the community and moved many to speak out in support of the individual and against the horrific behavior of the offenders.

This is one of the saddest things I’ve read in the 13 years of being a capsuleer ?☹️? Please keep us updated on Olivia’s recovery and pass on the support of all the FB Eve peeps.   — commenter

An Imperium News team, led by Rhivre, set out to investigate the validity of the claims that have lead to the “I am Olivia” campaign. The allegations of cyber bullying and suicide are very serious and the team proceeded with sensitivity, caution, and due diligence during the investigation. Once our findings were complete, we felt we were in a position to present the facts with a high degree of confidence. In the interest of protecting the real identities of the parties mentioned in this article, we have chosen to use pseudonyms wherever possible.

On October 4th a story came to prominence of a young woman named Olivia, who was driven by toxic players to attempt suicide. They allegedly attacked her in private chats, making fun of her previous posts on Broadcast4Reps (B4R).

Note: B4R is a player-managed EVE support network for those suffering from mental illness, thoughts of self-harm or suicide.

As the story goes, Olivia was seeking help in B4R at some point. Later, two players she knew, whom we will refer to as “Thing One” and “Thing Two,” invited Olivia to a private convo and talked with her. Five more players from Manifesto, a hostile neighboring alliance, were invited into the chat channel. All seven players then proceeded to haze Olivia about her B4R posts. The event pushed Olivia to attempt to end her life, which reportedly left her unconscious and in hospital for several days.

The story originally went public on October 4, when an outraged man, who identified himself as a friend of Olivia’s, posted a comment on the EVE Online Public Group on Facebook. The story was later corroborated by an individual claiming to be Olivia’s sister, Annabelle Grace.

Further posts said she was still in hospital, but was recovering. Members of the Facebook group EVE Online (a public group run by fans of the game) were initially horrified, but over time they cheered as Olivia announced she was better. The story was picked up by The Neocom in an article called “Her Name is Olivia.” It grew into a movement against bullying helped by Reddit, Twitter, and Facebook. 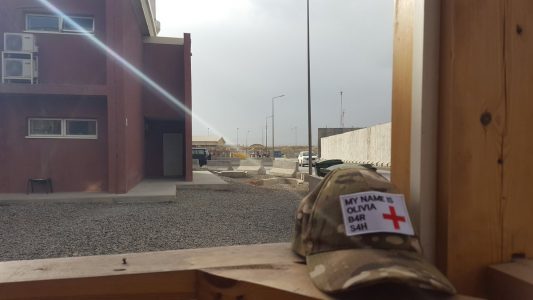 CCP Games, EVE Online’s developer, began investigating the incident. Manifesto leaders scrambled to find the culprits in their own alliance and vowed to cooperate with CCP, as did B4R organizers.

Support for Olivia in the form of ISK and admiration poured in. Donations were taken: the public API given by the person starting the drive indicates that around 10B ISK was directly given to him for this project. A citadel was proposed, and it spread to the forums with some even suggesting it should be unattackable. Eep, of IWANTISK, also offered to build a Keepstar.  Chribba was asked to hold donations but yesterday it was announced that the ISK collected would go directly to Olivia. Her corp was also starting a recruitment drive, to leverage the goodwill from players. As momentum grew, Olivia told followers she was feeling better and would be attending this year’s EVE Vegas. Moreover she was giving up the single life and looking for suitors, and also looking for potential meetups in Vegas.

Imperium News was aware of the Olivia story but decided that it was a private matter and stayed away from it for weeks. Then a few days ago, Editor Rhivre was privately asked her opinion of the veracity of the Olivia story. Rhivre looked into it, and by simply searching Google for images of Olivia she was able to see that the picture being used for her belonged to an alternative social media account. Rhivre brought this fact to me and we opened an investigation with help from trusted researchers.

Everything about Olivia looked wrong. The Facebook accounts of both “Olivia” and “Annabelle Grace” were odd to begin with because they didn’t show pictures of the two together, or of each other. The accounts also lacked activity. All their posts had minimal Likes – far fewer than is typical for this demographic – and posts often went dormant. The real women, by contrast, had a full history of posts showered with comments and compliments, just as you would expect. One picture showed a real family and confirmed that the women used to construct Olivia and Annabelle were not from the same family.

After a feverish search through the internet and interviews with leaders from Manifesto(the alleged trollers), and Krab Republic alliances (Olivia’s alliance), the story of Olivia began to unravel.

Your name is NOT Olivia, and neither is hers 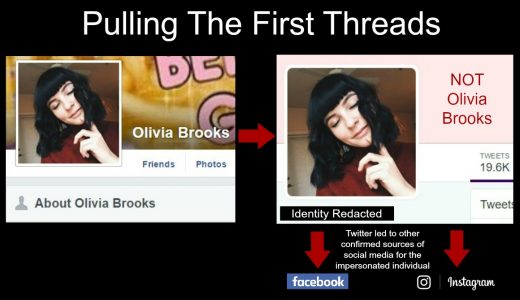 Olivia was not harassed, never tried to kill herself, and in fact it does not seem as though she even exists. She is a construct made from the pictures of a healthy, happy, young woman who has nothing to do with EVE and nothing to do with Olivia.

On the day “Olivia” was supposedly sleeping in hospital, the actual woman in the photograph communicated by Twitter that she was eating peanut butter, listening to music, and described the shoes she was wearing (Vans). 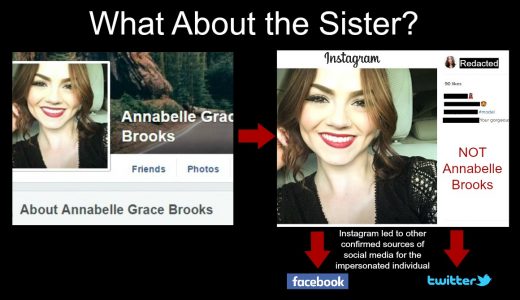 The same is true for Olivia’s sister. She doesn’t exist either. The only person that we believe is real is the OP, the “friend”, who started the whole story on Facebook. All the other characters in this story were nothing more than creations of his that were used to “catfish.”

A Catfish scam occurs when someone assumes a persona (or many) in order to trick another person into believing that they’re really that person online. Oftentimes a “Catfish” will go to extremes to continue their lie and typically use social networks, dating sites and all different types of online forums. They might display fake profile pictures, get a separate phone line and even create a complete online profile with “fake” friends to cover their tracks. — socialcatfish.com

After looking into it, we discovered that the OP has a history of creating fake people on Facebook and using them for various purposes. The catfish accounts have been around for years but had no presence in EVE. Olivia and Annabelle, as far as we can tell, don’t have characters in EVE. There are no logs of Olivia anywhere to be found, but they were talked about inside the game. We approached Olivia’s former alliance, Krab Republic. Their chief diplomat stated Olivia’s story was true, but he had never seen them online or talked to them in Teamspeak. All his information came from a single source, which turned out to be the OP. That has been the problem all along. The Olivia story grew because the OP was able to corroborate his own story using different personas, but no one checked the authenticity of the witnesses themselves. Essentially he used sock puppets to fool everyone who inquired about Olivia’s authenticity, and the fear of doubting an attempted suicide also likely deterred proper scrutiny. The idea that EVE players were capable of such behavior may have also contributed to a rush to judgement by the community. We’re not that bad are we?

We were able to make contact in the public chat of Olivia’s corp, Storm Tribe. The CEO went idle when we arrived and never returned. A corp member – we assume to be an alt – suggested we put our requests in an email and stated that Olivia and her sister were indeed real and popular in the corp. Meanwhile Zamrikus, of Manifesto, turned his alliance upside down looking for the five harassers. He never received the logs that showed which of his members were the trolls.

A few hours ago, “Olivia” posted romantic musings about her future trip to EVE Vegas. She hopes to meet someone at Vegas, or more logically, extract more wealth and attention from EVE players that think they are helping a young beautiful woman, when in actuality they are talking to a corrupt man.

The good news is you don’t need to worry about Olivia, or her sister, because they are not real. Whatever image you bonded with is a real person, just not anyone who knows anything about EVE or who even exists in our space. The OP who concocted this myth has some answering to do for violating the trust of his fellow players in such an abhorrent manner. When things spun out of control, he should have found a quiet way out of the game. Instead, he has kept up the lies.

After several attempts to contact CCP on the matter through different people and mediums, we were able to share our concerns about the “Olivia” story’s authenticity with them. Although CCP was unable to provide us with any information, they did request that we provide them with any evidence in our possession, which we will be sending to them.

The Olivia fraud is a reminder that for some people, nothing is sacred nor outside the boundaries of fair play. It is extremely difficult to excuse the actions of those who erode public trust, the integrity of which is so tightly tied to assisting real people with real problems. Hopefully occurrences like the “Olivia” situation continue to be outliers. It is imperative to keep cynicism at bay so that when a real Olivia case appears, we don’t turn her away.

UPDATE: Imperium News has been in contact with the administrators of the Facebook page that was accepting donations on Olivia’s behalf. We can confirm that all ISK donations submitted through that page have been refunded. The administrators have also contacted Chribba to make sure that he knows to do the same.

In addition, Neocom has offered this tweet in corroboration of the story.

Imperium News would like to once again stress that there are no indications that the administrators of the FB Donation page, Chribba, or B4R, were at all involved in any of the less savory aspects of what has transpired. We thank them all for their continued dedication to openness and their ongoing support for the EVE community.