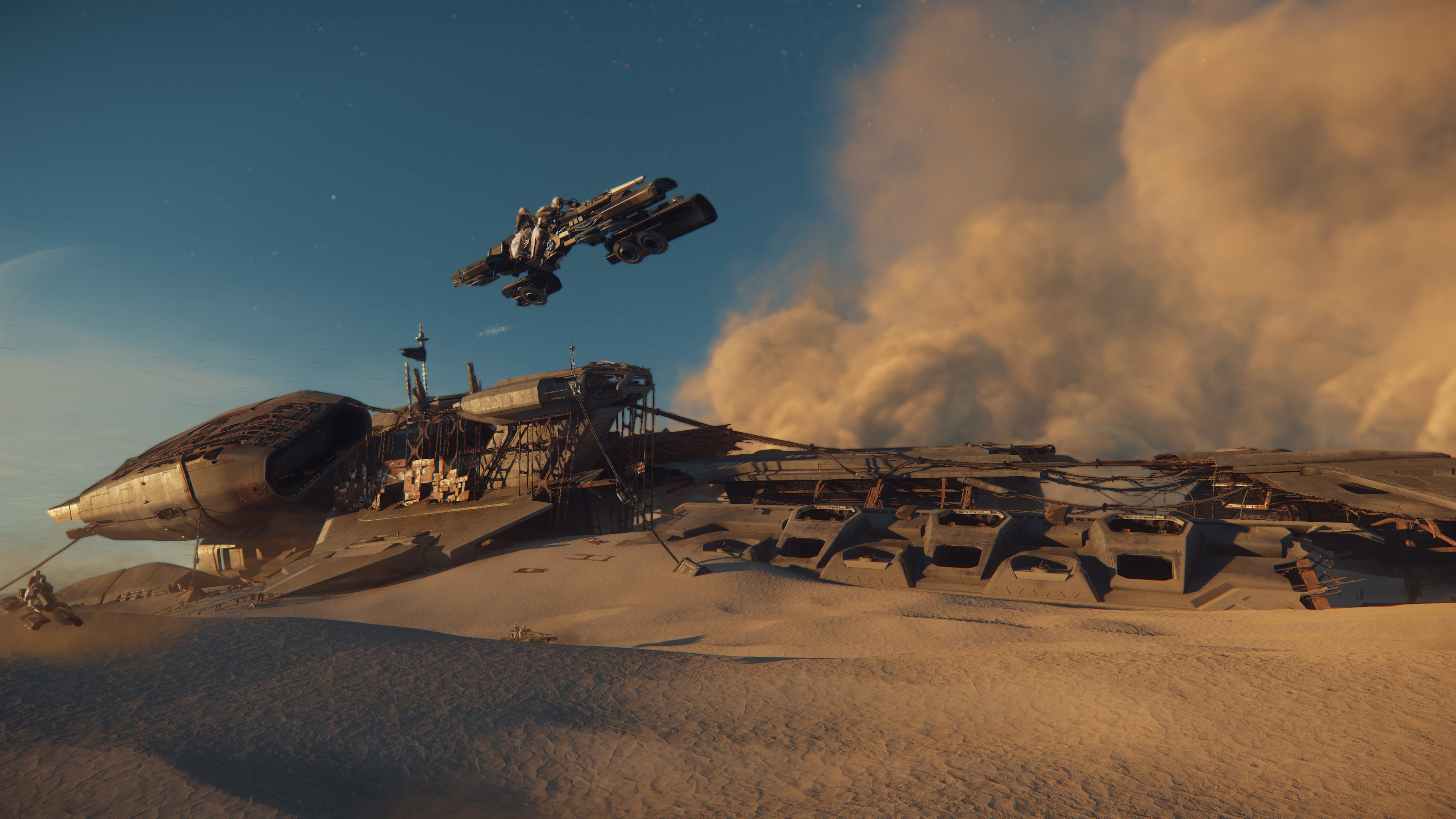 But is it an Emergency Landing?

Last week, Star Citizen’s own convention “CitizenCon” was held. Star Citizen is officially 4 years old, another birthday cake was cut, and as is tradition, Squadron 42 was delayed to next year.

Cloud Imperium Games Head Honcho Chris Roberts held off on being specific about dates, except to say that rather than the “release a month” schedule they shot for (and missed horribly) last year, they are now aiming for a cadence of one release every three months. The next six releases were outlined, including the upcoming 2.6 update, and if that outline and release schedule are held to punctually, the game will not have content involving exploring other star systems (something fundamental to the original pitch) for another fifteen months. However, each release should open up more locations and stuff to do within the Stanton system.

This year’s gameplay demo showed off running around on the procedurally generated planets that they’ve been cooking up.

I’m torn about this. On the one hand, it is supremely cool to be able to seamlessly fly from space, past a space station, through the atmosphere, over mountains, deserts, oceans etc. etc. to a landing pad, get out, run/drive around, and eventually shoot at people. When I was a wee computer game nerdling, that was definitely something I dreamed about doing in a game. And from a technology standpoint, of course it’s impressive.

But as an adult who has paid attention to the No Man’s Sky fiasco, my enjoyment is clouded by practical concerns: what do you do with this much terrain? How can you possibly make it interesting? After the first couple minutes of flying, I’m bored already, but thankfully we’re then on to a mission. We are to investigate some distress beacons and search the shipwrecks they’re found in. This gameplay is kind of cool, but it also doesn’t really seem to benefit from the procedural terrain; everything that is really neat has been placed by artists, so travel becomes “drive through miles of procedural terrain to find the next set piece of handmade content.” Then again, this is obviously very premature speculation this early in the development of this specific part of Star Citizen: Roberts says that much of the work in giving planets more varied biomes and features, and giving artists the ability to mold the procedural terrain to their needs, was only done after they presented at Gamescom in August.

Checking in with Squadron 42

“S42 has grown exponentially in ambition and scope since first pitched in 2012” the slide says, like that’s a good thing. And it shoots out some impressive numbers to prove it:

The unspoken number: 2017. According to Roberts, all of the chapters and gameplay features are at a “grey-box or better” stage of completion, meaning that everything is blocked out, all the action is done, and it’s reasonably balanced, but none of the final assets or “final polish” are in yet. The focus now is on building one chapter to final quality which will be released in the near future (“hopefully before the end of this year”). The presentation emphasized that they are taking the slow and steady route to make assets that can be reused in the whole SC universe with “no shortcuts.”

After the Star Marine imbroglio in which CIG contractor Illfonic developed the hyped FPS-module independently in such a way that their work could not be reconciled with the main development branch and had to be thrown out, Star Marine was demoted from full arcade module status to a couple of FPS-themed stations in Alpha 2.0.

However, the module is not dead. Two new locations have been added to the planned Star Marine release: a 4 vs 4 station called “Damien”, and the 12 vs. 12 “Echo Eleven” asteroid base. It will also feature two game modes (deathmatch and “control”), new armor, weapons and grenades, a tactical visor, friend-or-foe identification, looting of corpses, and achievements and ribbons.

Star Citizen’s dogfighting arena minigame, Arena Commander, is also getting improvements: the current clunky customisation system is being replaced; a pirate swarm arena with pirates instead of Vanduul; persistent missile ammo (you can’t crash into an asteroid to respawn with more missiles); reloading from pickups dropped by kills; a full scoring rebalance; and most ships flyable in Alpha 2.0 will be available for use in private matches.

Along with these minigames, Alpha 2.6 will bring expanded content for the main Crusader map, a rebalancing of the flight model, a dynamic music system, an updated camera system, and the ability to stay in the game without going back to the lobby and facing an endless chain of loading screens.

Roberts says that these updates should come roughly every three months now.

In 3.0 the rest of the Stanton system will be rolled out with some of the Planetary 2.0 technology demonstrated in the gameplay demo. The mechanics for some basic professions will be in place: choosing to be a trader, cargo hauler, pirate, mercenary, or bounty hunter should be possible. As always, new ships and vehicles will make an appearance: the RSI Ursa Rover, the Drake Dragonfly, the Drake Caterpillar, and the RSI Constellation Aquila (the one with the rover).

3.3: Farming, rescue, solar system locations, new ships. The audience cheered heartily for this one, suggesting there may be a previously unsuspected overlap between the Star Citizen and Farming Simulator 2017 player bases. 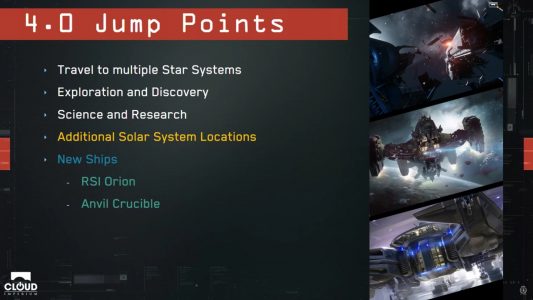 And finally, update 4.0 is planned to have jump points, with travel to multiple star systems other than Scranton, exploration, discovery, science, and research. And more solar system locations. And new ships.

A full communications suite for Star Citizen organizations called “Spectrum” is not yet in release state, but will be offered soon. It features private messaging, forums, notifications, and voice, kind of like Discord, but just for Star Citizens. It will be accessible in-game and out-of-game on the web, on mobile operating systems, and in the CIG Launcher that you use to start the game.

To celebrate the 4th year of Star Citizen development, Cloud Imperium Games ran a very special ship sale called the “UEE Militia Mobilization Initiative” that offered “military grade ships for civilian militias”. The RSI Polaris Corvette was available to be ordered as a “concept sale” for 750 USD, and military variants (some new, some old) of many ships were on sale individually as well as in “discounted pre-designed ship teams”. This sale ran until the 17th of October and during its duration Star Citizen raised 2.279 million USD.

The Journey So Far

The presentation kicked off with a fun video showing just how big the Star Citizen project has become in four years: 360 staff, 449057 threads and 6961052 replies, 1499754 accounts, 40559 user-created organizations. They started with a similar video last year. How far has the project come since then, CitizenCon 2015?

The multiplayer persistent universe, the Million Mile High Club, the ARK starmap, cross-chassis upgrades, and the referral program were all touted at CitizenCon 2015 and released shortly after. Squadron 42, not so much. Star Citizen-branded Saitek hardware never materialized. Star Marine was conspicuously absent from that presentation, and it’s less absent from this one but still not released yet. Probably not abandoned as some theorized.

Overall, we’re seeing steady progress on Star Citizen, just much more slowly than promised. A lot of progress is being made on small, somewhat peripheral goals (starmap, million mile high club, Spectrum), while the core promises of the pitch made four years ago (exploring the galaxy) still loom large and distant on the horizon. Maybe a steady stream of small additions like farming and mining will keep backers engaged and promote the fundraising necessary to make good on those promises in the long run. Or maybe continued perfectionism on things most people never really asked for will bog the game down until they run out of money.