“The battle is fought and decided by the quartermasters before the shooting begins.” (World War II, German Field Marshal Erwin Rommel)

With the fall of Niarja to Triglavian forces, a major supply line feeding Legacy and TEST for their war of extermination against the Imperium may have been disrupted. What was once a nine-jump sprint from Amarr to Jita has now become a 46-jump marathon. Conversely, Imperium supply lines navigate Khanid, Genesis and Sing Laison to reach Jita, avoiding Amarr entirely.

Niarja was once a 0.5 high sec system, but Final Liminality lowered that to -0.7. That removed CONCORD and even normal gate guns from the scene. Gating freight through a lawless system is an invitation to disaster, and kills have increased exponentially.

Observers point out that moving freighters across such a vast amount of space is unusual for null blocs. “The main low sec system used in the south and east to get to Jita is Ignoitton, which is a few gates away from Jita,” a veteran jump freighter pilot explained. “You could technically go to Amarr space first, and then use freighters to get the rest of the way to Jita and save some jump fuel, but it would end up taking a while in actual time, and it’s much riskier.” He added, “I don’t know if (their) freight is actually doing this for some reason or if it’s just their leadership misunderstanding or misstating things.”

The invasion drew the attention of both sides of World War Bee from the start. Battle reports from the first 24 hours of the incursion show large numbers of partisans taking one side or the other in the fight for Final Liminality. Now that Niarja has fallen, and its security has dropped to null sec levels, the number of kills has exploded.

“When Niarja came under attack, we felt that defending was in our best interest. Obviously, now Niarja has become a proxy battle for the larger war in null sec, with much hurfing and blurfing,” explained Dunk Dinkle, director of logistics for Brave Newbies.

With the Triglavian win, the Imperium also buys itself some breathing space, according to YouTube host and political commentator Jin’taan. “Obviously it disrupts the flow of goods from Jita to Legacy’s space. It doesn’t impact PanFam too much, nor the Imperium. More interestingly, it allowed the Imperium the opportunity for a meaningful attack against Legacy. There’s not really many objectives the Imperium can go for currently, other than defensive timers and minor counterattacks on sov, so forcing Legacy into a defensive stance by attacking a system in high sec is a neat way to reduce pressure in the south.”

As to why Legacy/TEST rely on gating freight versus using jump freighters for long hauls, “Null sec groups all handle logistics differently, some based on location, others on tradition,” explained Dinkle. “As we live in the southern part of the map, the route from Jita through Amarr is useful to us.” Brave and its allies rely on high sec supplies for large amounts of salvage, ice, and wormhole gases. “Other groups don’t rely on this path,” he added.

High sec corridors (particularly approaching Jita) are the most dangerous part of any hauling trip. Asked how a group could overcome the routing changes, one veteran hauler said, “If Legacy gets its act together and joins the rest of the professional shipping groups out there, they will shift to jump freighters.”

A theoretical jump freighter route to Amarr from Legacy space in D-PNP9 in Esoteria exists as well. That route “would take about 110k isotopes in a Rhea, and one to Jita would take about 140k isotopes,” explained a pilot for one of New Eden’s largest hauling services. “So it’s not a huge savings,” but it would avoid the bulk of the high sec trip.

Imperium members moving freight from Delve to Jita use the coalition’s in-house hauling corp, Imperial Transcontinental Logistics (ITL).  Its CEO Tiberius Xavier commented, “The (Niarja) news came as a surprise to me. I initially doubted the claim and sought confirmation. It seemed incredible that a large coalition would be so adversely affected by a single high sec system flipping to null sec.”

Xavier believes that, “the unaffiliated high-sec community will surely find a viable workaround, but whether Legacy follows suit or leverages third-parties is uncertain. Regardless, I foresee an added cost in both time and ISK for shipping for Legacy.” Indeed, the new landscape has already produced what is being called ‘The New Eden Silk Road’. The 50-system route through high-sec links all of the major trade hubs in empire space. 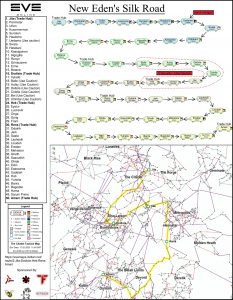 ITL remains unaffected by the change in Niarja, and continues to provide high quality service at favorable prices.