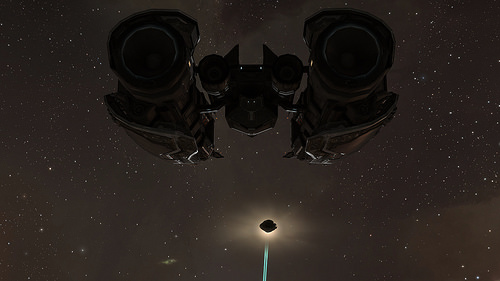 In EVE, every class of ships is designed to fulfill a specific role above all others. This doesn’t mean it’s impossible to do things with a ship that it wasn’t originally designed for, just that it requires a bit more effort to make things work. Often, a ship fitted to do a job that it was never intended for sheds light on game-changing mechanics. This series of articles will look at the intended uses of various ship clases, and how they are actually fielded in practice. The metagame evolves and shapes hulls beyond CCP’s intentions, and the Interceptor is no different.

One of the most common uses of interceptors is simply transporting your pod from one location to another. Players need to get to various locations all over New Eden, including places without a jump clone. Since most people typically don’t enjoy warping across systems and jumping gates for the fun of it, they find ways to make this process as short as possible. The three defining navigational attributes of the modern interceptor all contribute to this.

The first is raw speed. At 8 au/s, interceptors have one of the fastest base warp speeds in the game. Good navigational skills—even if not required to get into the hull—push that even higher. That speed makes moving across constellations, regions, or even just large systems like Thera a lot easier, and crossing the vast AUs of space goes by much faster. Anyone who’s driven a mining barge or freighter even a few jumps knows how painful a slow warp speed can be.

Next comes agility. Interceptors have a low align time to begin with, and with proper fittings, can obtain a sub-two-second align time. That matters for reasons that have very little to do with in-game mechanics. The altitude at which communications satellites orbit means bouncing a telecom signal off a single satellite takes half a second, even if the entire network on both ends of that is fiber optics. The game code also processes commands at discrete intervals, aka ‘server ticks’. The combination makes it extremely unlikely that someone can lock and point you before you enter warp. It’s not impossible, especially not for people living near the UK server farm EVE runs on, but it’s hard.

The last, and arguably most valuable, trait the interceptor has for traveling is interdiction nullification. What this does is make it immune to area-of-effect warp disruption bubbles. Bubbles can only be used in null-sec and wormholes, but are commonly used in those areas and can be quite troublesome when used in gatecamps, whether as drag bubbles, stop bubbles, or an interdictor sitting on the in-gate. And where they work, they completely prevent most ships from warping out of the affected area. Since a large portion of the player base lives in areas where bubbles can be deployed, having immunity can be extremely important.

These traits, common to all interceptors, support the idea that travel was one of the uses for which they were intended. They have everything a pilot needs for getting around New Eden in a timely fashion.

When flying in fleets, Fleet Commanders (FCs) want as much information on what is happening around them as possible. This means that a ship or two will fly ahead and/or behind the main fleet to keep an eye on the surroundings. Interceptors tend to be the ship of choice for this task, with many of the same strengths as those of the travel-ceptor role coming into play.

The primary factor that makes interceptors good scouts is their survivability via escape—effectively using the same tools as the ‘travel’ role. If they jump through a gate and find an enemy fleet, a skilled pilot can either warp off quickly, or burn back to the gate and jump through without being caught. Their speed and bubble-immunity also combine to make them very useful for providing perches for the fleet to warp to, whether on-grid in combat, or to navigate around bubbles while in transit.

Another important factor in choosing a scout is expendability. The scout, whether moving ahead of the fleet or trailing behind to watch for stragglers, will often be working without support. Logistics and other ‘rescue’ elements may not be able to arrive in time to save them. As a result, there’s a certain expectation of loss baked in. Interceptors are relatively cheap and easy to replace when they blow up. 50m ISK should be more than enough to buy and fit a good ‘ceptor.

Overall, the role of scout is one that the interceptor fills naturally. It has all of the qualities needed, and while other ships can scout too, few can do it quite as well.

With the changes that were made to the sov mechanics, the meta had to adapt to entosis battles. Sov battles became constellation-wide affairs with mobility playing a key factor in being able to win these contests. It is important to note that by activating an entosis link, a ship becomes unable to warp or receive aid from another ship. This makes many entosis ships vulnerable to the interceptor fleets that have developed to counter them.

The modern Battle-Ceptor is the evolution of the venerable ‘Fozzieclaw’ used by many groups for hit-and run tactics against enemy fleets. The relatively high alpha (single-volley damage) and ease of escape provided by these interceptors makes them the natural choice to counter entosis ships that have little to no protection. This was a strategy that was first used on Tranquility by Provibloc during the Imperium’s exploratory attack to learn entosis warfare. It later saw significant use in the Casino War by the Imperium, in the first iteration of the Night’s Watch, Sword Fleet, and has remained a staple of entosis warfare ever since.

Battle-Ceptors are characterized by their fast align speed which allows them to warp away as enemy reinforcements arrive. This is complimented by their interdiction invulnerability, as they ignore bubbles and gatecamps that would slow down other fleets. In this way, the Battle-Ceptor is similar to the Travel-Ceptor’s ability to move around New Eden unhindered. In addition, because of low-slot modules to maximize damage output, and mid-slot modules for fast-targeting and EWAR (many carry points or scrams), these ships have even less tank than interceptors used for travel or fleet scouting. Once again, their very disposability comes into play.

What Battle-Ceptors have that their passive counterparts lack are fangs. A single ship will typically do at least 100 dps, delivered in volleys of ten times that or more. If it was alone, most other PvP ships could survive and easily destroy the ceptor. What allows Battle-Ceptors to work is the sheer number of ships. With a fleet of fifty interceptors, a single target must deal with a burst of 5000 dps, with as much as 55,000 points of volley damage in the first shot. Most targets will crumple quickly under such an assault without being able to receive support from a fleet. If the defender looks like it will survive while reinforcements arrive, the Battle-Ceptors can just warp off.

Battle-Ceptors behave like a dagger. Individually they do little damage, but in numbers they become quite deadly. They slip past defenses to deal a quick and lethal blow before retreating to safety.

Interceptors fill a number of roles in New Eden’s skies, from lone transportation to massed schools of piranha. The traits that these roles share are the key to their success: good agility, interdiction nullification, and speed. While future developments and balance passes may bring changes to some aspects of how interceptors are used, one thing remains clear: there will always be a place for fast, highly maneuverable ships in the meta of EVE.