EDITOR’S NOTE: A look at the biggest battle to date in World War Bee from the point of view of the PAPI FCs involved.

Tuesday, July 14 – Around roughly 2200 hours, Pandemic Alliance Please Ignore [PAPI] deployed a sizable sub capital fleet into the system of L-A5XP which sparked the bloodiest and first major battle of the war thus far. The fighting over the region of Taurus was one of the largest engagements to date. This battle ended up netting just over 2,800 pilots and a staggering 1533 ships lost in the initial invasion. The total destroyed sits at 274.6 billion, with the majority being Imperium losses, which totaled 222.6 billion.

According to fleet commanders (FC) on the ground, the spark was struck on the D4KU-5 in gate from L-A5XP. Pittsburgh2989, one of the reserve FCs for Northern Coalition. (NCdot), stated that the fighting likely began when invading forces slammed into a small Initiative (INIT) gate camp fleet. “The fighting in L-A5 occurred, I think, because INIT was stupid enough to try to gate camp  the D4KU- gate. I’m not entirely sure why they were there, but we all jumped into them and began fighting there,” said Pittsburgh. The initial engagements consisted primarily of subcaps, but quickly began escalating. It peaked after Pandemic Legion [PL] and other PAPI fleets entered the field and began engaging scattered Imperium forces.

Leading the charge for NCdot was FC Nituspar, who coordinated and consolidated his forces with other PAPI fleets, according to Pandemic Legion (PL) Executor and FC Hedliner, who also led the PAPI subcap fleet. “[PAPI] and NCdot fully integrated for this specific fight so we could concentrate our numbers quickly. Nituspar got things going, I brought my guys over and we consolidated right there on the field whilst fighting. From there I handled subcaps and he started coordinating across other allied fleets,” said Hedliner. “Our Muninn fleet was the largest on our side so we tried to get as much grid control as we could to ensure the INIT capitals remained tackled.”

PAPI was not only able to consolidate their subcaps to successfully engage, but they were able to organize their disparate capital groups into a fleet as well. “Overall our fleets ran pretty smoothly and this was a great test of lots of stuff we put in place in the run up to the war. We learned plenty, which is always positive. I noticed there was very heavy tidi, which was a bit frustrating at times, but we managed our members through it pretty well,” said Hedliner. “For me this was one of those classic fights which starts very quickly and escalates quite heavily resulting in a long battle. It was hard work but for the right reasons.”

Despite being able to escalate, Imperium forces appeared almost routed, and at a minimum disorganized, to the invaders. According to Pittsburgh, the cause of the disarray in the defense was “hubris”. “I would say primarily it was due to hubris. INIT thought they were okay to use capitals despite losing the subcap fight.” Pittsburgh noted that INIT had even undocked super capitals and Titans, but did not deploy them in the defense.

“INIT’s choices were interesting,” Hedliner said. “I’m not sure if they intended to escalate further or capped their escalation at that number of carriers.” He believes some fleets abandoned their allies to the onslaught. “I’m not entirely sure why the Imperium fleets engaged us a second time after the capitals were dead, but that resulted in a favourable trade for us as well because the INIT’s fleet, which had reshipped to Muninns, just abandoned the Goon sacrilege fleet,” noted Hedliner.

The bloodiest fighting took place in L-A5XP, however smaller key skirmishes flared up all across the region with a smaller but brutal battle erupting in P5-EFH on the northern edge of the constellation. Given this was one of the first major military actions of the war, the primary objective was iHub destruction, according to Pittsburgh.

However this action was a first step, according to Hedliner. “Fountain is the front we (Panfam) are focused on right now, so any inroads here are obviously positive. All the fighting we’re doing is currently focused on these gateway constellations – Taurus and Wyvern. The significant thing about this particular fight is that it was the first real clash after about a week of standing off either side of the region,” said Hedliner. 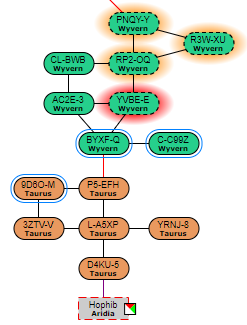 Change in Tactics or Stall Until the Wall

While many in PAPI see this initial victory as a shutout for Imperium forces, some leaders remain cautious of the Imperium battle plan. “It will be interesting to see how the defensive posture changes now that a couple of iHubs have been destroyed,” explained Hedliner. “I know they’ve designated some of their space (as) ‘floodplain regions’ (i.e. ‘not so valuable’ buffer zones) and that may have a bearing on how they choose to fight in it or over it, as well.”  Given this uncertainty, as well as the Imperium’s well know extravagant coffers, they are preparing for a long and drawn out war. According to Hedliner, this was evident in the battle for Taurus. “I think the key (to victory) was teamwork and endurance. It was a long one, which required good coordination and stamina from everyone involved. That is kind of the tone of this war really, I think.”

The victory has bolstered confidence amongst many in PAPI’s forces. As a result, some believe that it will be the defensive walls around Delve and other key core regions that hold the biggest resistance, however the overarching battle plan will be a battle of attrition. “I think they (Imperium) will fight the entire way back to 1DQ. Right until we kill that keepstar,” said Pittsburgh, “They have unimaginable wealth on the Imperium side. INIT will fall long before anything of significance in Delve, but I’d imagine we are several months of fighting from that point.” He added that “you will find strategic (iHubs, Fortizars) and tactical losses (individual battles) continue to mount for the Imperium.”

Prior to the invasion, both sides postured to the world on various forums and websites, but the fighting and organization fielded by PAPI clearly showed that many consider this an actual “war of extermination.” “This is an extermination event, either for the Bees and their pets or dinos and Pandafam,” stated Pittsburgh, who summed up the collective viewpoint of PAPI. “I mean it’s that sort of war. Like, INIT is taking the brunt of the force now and seeing little support. So they will slowly wither away.” He said, “If Goons manage to ever wake up and actually do something, other than sit in Delve Rorqual mining and had a successful campaign, it would be to kill off TEST and eventually Pandafam. One side or the other is dying in this war. So far, Imperium have done nothing but slowly bleed.”

“This war,” Pittsburgh concluded, “is just about hate and being tired of them (Imperium) even existing. The major groups like Legacy and Pandafam are in this for the long haul.” And just like long seeded hatred, Pittsburgh also believes this war will be long and brutal. “Just in general this will be a long war. Both sides want to spin it hard on Reddit, but Rome didn’t die in a day,” said Pittsburgh.

While he did not agree with everything Pittsburgh said, Hedliner did agree that the war is solely about the Imperium. “I think its fair to say it’s the majority of nullsec vs the Imperium.” However, Hedliner noted that because of the massive amount of smaller and previously unaffiliated groups within PAPI, command and control will likely be an issue that the Imperium will not have to contend with. “Whilst the sides might look imbalanced, the non-Imperium side has a large number of small groups which may lack the same kind of command and control as a larger force like the Imperium and will have to consolidate into fleets to be effective,” Hedliner said. “The Imperium is certainly not struggling for numbers at a coalition level.”