Jump Range Set to Be Increased for Capital Ships

CCP has proposed jump range changes for capital and super capital ships. The slight increase in range is expected to “alleviate some of the problems capital pilots are currently facing,” according to CCP Larrikin. The presumption is the alleviation of choke points along certain paths in Derelik and Aridia regions, where Pandemic Legion and LowSechnaya Sholupen (translation: dirty street boys of low-sec in Russian), hunt supercapitals respectively.

Based on the discussions we had internally and then with the CSM at the recent summit, we’re looking at increasing the base jump range of combat capitals for the Ascension expansion.

This marks the first significant adjustment to ease the restrictions on force projection of capital fleets since their jump ranges were sharply reduced in November 2014, the Phoebe Expansion. Some veteran players cite the 2014 changes as a contributing factor to the PCU (concurrent players online) dropping. 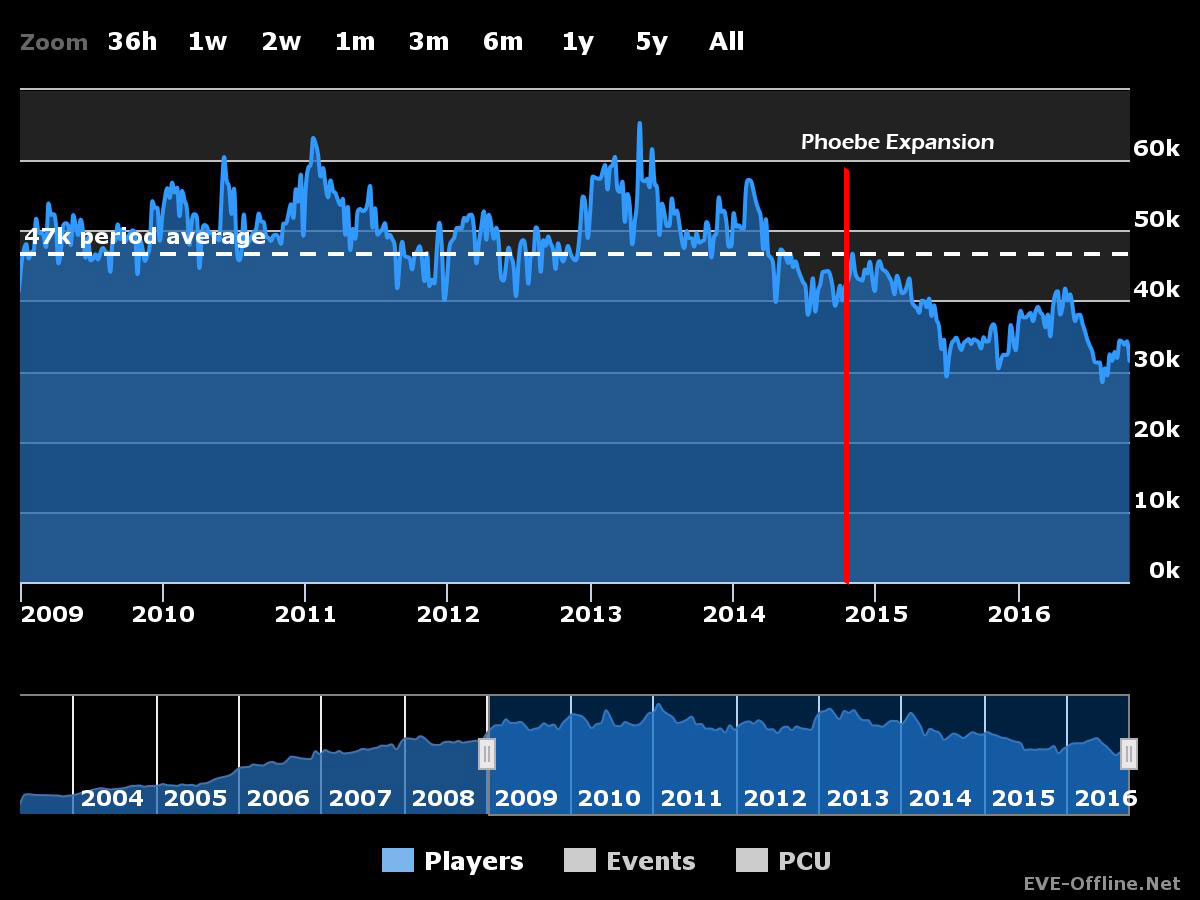 Clearly the state of power projection was broken before Phoebe, with some alliances able to third party on just about every large fight. The jump range nerfs had the intended impact, limiting super capitals to a mostly regional role. Currently, the Northern Coalition (NC) capitals are concentrated just outside of Tribute region, sieging Circle-of-Two and its allies. Meanwhile, Goonswarm Federation (GSF) enjoys relative peace in the Delve area as they take advantage of uncontested regional dominance. Further away, scattered all around null-sec, smaller alliances like Fidelas Constans (FCON) don’t have to look over their shoulder for a surprise long-distance drop from NC or GSF supers. Maybe everyone is too safe. As one of their goals, CCP wants to “reintroduce a natural path for capital combat to escalate.”

CCP successfully managed to breaks null up into smaller wars and blocks with jump range, Aegis sov and the lightyears. Now they give a bone back when not needed  – corebloodbrothers, FC, The Volition Cult

Another goal was to “differentiate the power projection of Capitals and Super-Capitals.” This is a reversal of CCP’s earlier strategy of simplifying the game by reducing the various jump ranges down to a flat 5LY. The proposed change adds back some of the complication Phoebe removed. Now strategic decisions on jump routes might return to the days of various cynos placed in at different ranges. It is unlikely the supers will be abandoned by their logistic escorts, however, dread bombs (suicide dreadnoughts) can double jump to strike from 14LY instead of 10LY, and with the assistance of a Force Auxiliary armada. This is a striking distance supers cannot match.

The most convincing reason for the change has been the break up the choke points found in Aridia and Derelik. Many lone supers have died trying to cross those regions, since the paths through are limited and heavily camped by capital hunting teams. This is really only a concern for supercapital pilots trying to catch up, by themselves.  An organized group can plant citadels to establish safe passage anywhere in the game, using them as stepping stones over dangerous waters.

The Pandemic Legion/Goonswarm heavy CSM has been quietly going about their work with CCP, and the Mining Foreman changes as well as these were cited as major successes for the sitting CSM members. You can hear Sullen Decimus on “Talking In Stations,” describe the successful influence exerted. This is a major shift on CCP’s part as the executive producer has stepped in to fully support the council. To CSM’s credit they are passing the influence on to players.

The numbers released today are possibly open to feedback if there is enough community push behind what I’m talking about or something else.  – Mr Hyde, CSM

Some players think the changes go too far, others not far enough. The discussion surrounding the changes are just starting on the EVE forums. Log into the forums to participate.