This article is a collaboration by Erick Asmock and Paramemetic, with artwork provided by AnuranonthecoucH.

On June 16 on Push to Talk, we introduced the Delve Time Unit, an abstract meta-currency built on the total amount of wealth generated daily in Delve, extrapolated from the Monthly Economic Report. Each month, CCP releases economic data from all over New Eden. For the last few months, however, Delve has dominated the report, both generating more industrial output and creating more wealth than any other system in New Eden. But these numbers are big, with Delve generating more than 900 billion ISK daily. Big numbers are impressive, but difficult to work with. For the convenience of everyone in New Eden, therefore, we offer you the Delve Time Unit, built on Delve’s total mining and piracy bounties each month. 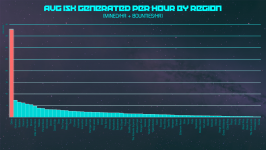 Of course, just like time and currency alike, Delve Time Units come in different denominations. By dividing the Delve Hour into minutes and seconds, we arrive at two other derivative currencies, the Delve Minute, valued at 633,671,297 ISK in May, and the Delve Second, which is worth 10,561,189 ISK, or about the cost of a well-fit Cormorant. These alternative units are much more easily conceived of than full amounts of ISK. Looking to buy a titan? That’ll be two Delve Hours. A set of slaves? Three Delve Minutes. 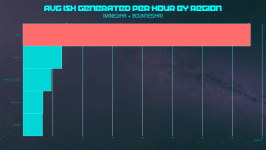 But there are other benefits to the time measurement. As an abstraction, it can be used to determine a region’s inhabitants’ wealth. An Esoteria Hour, for example, is about 6.5 billion ISK, or about one sixth of a Delve Hour. This is almost exactly twice as much as a Deklein Hour. Keeping this in mind, we can easily determine the profitability of a region versus the industriousness of its owners by comparing historical performance.

For example, the trend in the Geminate Hour can show us the wealth generation of the late Drone Region Federation compared to Pandemic Horde. In January, the Geminate Hour under DRF was valued at 2.8B, down to 2.3B when Horde moved in. The Geminate Hour is now worth 3.3 billion ISK, reflecting Horde’s improved familiarity with the area, increases in ADMs, and a better established krabbing base. The Insmother Hour in January under Triumvirate was depressed to 1.3B, improving under DRF to 2.4B, and now holds steady even as the region is parceled out by a handful of invaders. 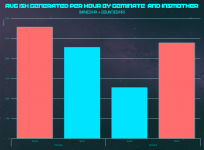 The Delve Time Unit doesn’t apply to individual krabs, as it’s difficult with the information CCP provides to see just how many people or even accounts are actually playing in various regions. What it does indicate is the general productivity of the inhabitants of regions and what kind of activities are going on there. We can see that Delve generates six times more wealth than Esoteria, for example. Most impressive is that Querious, with the Querious Hour valued at 7.3 billion, is the second most productive region, edging out the Esoteria Hour by just over a billion.

As an extrapolation from already existent data, the Delve Time Unit’s strength comes not from providing novel information, but from organizing that information into a more easily conceivable form. Every hour, on the hour, goons are collectively making 38 billion ISK. Every second, goons can collectively buy a fully-fit T1 roaming destroyer. When you kill a fleet of sixty goon thrashers, you kill one minute of Delve’s collective wealth generation. When an AFK goon loses his Hel to rats for some reason, it’s less than an hour of Delve’s collective production.

Using Delve Time Units reorganizes nearly incomprehensible wealth (in the form of trillions per month or hundreds of billions per day) into easily comprehended comparatives. 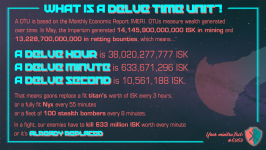