INN:  First off, let me say on behalf of all of us here at INN, congratulations on acquiring the BPC. Have you ever done something like this before?

Concentrati0n: In Eve- yeah. I remember a while back I was roaming Horde-held space (8QM0) in my Stratios, looking for cheap kills, and saw them bring two carriers to a belt to take out the Serpentis Titans that were newly added to the game. The first thing I did was get a ping about 500km away from the action on that belt, then aligned toward the titan. The second thing I did was send a DM to “Evil Master,” a roaming Karmafleet pilot who was an insanely active PVPer in the region at the time. He was more than happy to come in with his three Crusaders to annoy the pilots.
It turns out, the guy flying the carriers was dual boxing- and Evil Master provided enough distraction to cause one of the pilots to lose focus and die. Soon after this happened, the faction titan died, and I warped directly to it in my Stratios as it was being pulled by an MTU. I landed on it, looted a first-of-its-kind Serpentis Capital armour repairer, and then warped to a safe just as I got yellow boxed by the carrier. Backup never came for the carrier pilot since Horde had a policy at the time preventing people from “watching” others do these spawns; apparently it would mess with the regen or maybe they were afraid of blue ninjas that would be upselling for 1b, just like with the BPC that dropped. My patience and the time I spent setting it up paid off.

INN: For sure, patience is the name of the game here, I’ve been shown your post where bidding has hit 400b, maybe even 500b for the BPC? Do you think it will go any higher?

Concentrati0n: I’ve been getting weird offers from Northern Coalition (NCdot). through blues between 750 and 1000b ISK- the NCdot pilots then turn around and immediately withdraw the offer. That started happening after I turned down one guy who would “only offer 150b” and apparently he got really mad when I told him to buzz off. I hear that guy then made it a topic of conversation on comms and in alliance chat, which then deterred the people considering their potential 750-1000b prices from offering a bid. I’ve since blacklisted NCdot from offering due to this childish nonsense.

There is currently one 500b offer that I could take at any time. It’s not published on the official forums, but my expectations may have been set a little too high by previous empty offers from both blues and neutrals.

INN: Interesting, would you be happy to take 500b as the hype around this event slowly dies down?

Concentrati0n: If I don’t get better offers, I’ll wind up taking it. It’s only really been up for a little over a day.

INN: Do you have any idea as to what you would do with the money? At the current market rate of PLEX, that’s enough ISK to buy 24 years of Eve online game time.

Concentrati0n: I feel like I would use this money to make marketing decisions that promote activity in certain regions against hostile entities. This way, I could turn a tidy profit off investing in conflict for certain regions. I also love having ISK on hand to turn a profit on fire-sales. I love being able to help out the older pilots who come back from the game after a long hiatus in this way. If it’s an Imperium member who buys it, I’ve offered to put 2% of the proceeds to any official sig/squad of their choosing. I will also share this fortune with a good friend of mine who is not very active right now, but he has convinced me to come back to Eve as many times as I’ve convinced him to do the same. He’s likely the better party to ask what will be done with this ISK as he is a marketing genius. If it’s a non-Imperium [player] who purchases it, I think I may still throw 1% towards Eve-scout. I will also start hosting high-sec activities relating to the previous expansion for new or interested pilots to fight FoBs. Without the data gathered from the in-game channel “The Defence Network,” I wouldn’t have had people I could talk with about destroying FoBs which have very similar mechanics to the Sotiyo Event Works. I now have the funds to sponsor ridiculous ideas such as getting a Bowhead full of Catalysts and popping them out to replace ones that get destroyed during the event.

INN: Ridiculous ideas are always the best ideas. For those who don’t know much about FoBs and Sotiyos, the NPC ones, can you tell us about them a bit more?

Concentrati0n: FoBs are basically mini Sotiyo fights. If your strategy doesn’t work on a FoB, it likely won’t work when applied to a Sotiyo. The beauty with FoBs is that they spawn NPCs with the same AI as the ones fought during the Sotiyo event. So you get to learn how they behave and can start to calculate how much damage you need to be able to tank or how fast you need to go and at what distance while attacking. I also learned about changes with the structures. One change that’s being predicted is that the FoBs will start to target out to 300km and web people as well. This makes Jebi Vjetar’s speed tanking Cerberus strategy less viable unless he can surpass the missile velocity while webbed somehow. Another thing that I learned from the channel was that if you kept high slots free of damage-causing mods, they wouldn’t spawn any adds. This is likely why we haven’t seen people soloing/double teaming them on the killboards since December 5, while before that day it was common to see 10-20 or more dying per day to the same habitual exploiters in their Nestors. There are also people in high-sec who are extremely desperate to get these structures out of the systems they live in as it interrupts their daily ratting/mining. When they find and participate in channels like “The Defence Network,” they get to ask us questions while contributing new information they gathered about the NPC activity in systems they spawn in. Gray Orca and Tychicus Banner do a great job of updating the systems in which FoBs are currently active. So far, with the exception of multiple FoBs being able to spawn in a system, their lower difficulty, what the structure is fitted with,  and the fact that they can be probed down and seen on dscan- all info and experience I’ve been able to gather from the FoBs has been valid when tested against the Sotiyo mechanics.

INN: Just as a footnote, Sotiyos are the ones found in null-sec and FoBs are in high-sec?

Concentrati0n: Yeah, high-sec spawns the FoBs, null-sec and one lucky low-sec system has the Sotiyo.

INN: It’s interesting to see that FoBs are shaking up daily activity as well as providing more content for fleets to form in an effort to remove the issue.

Concentrati0n: It seems to me like there is a finite amount of FoBs that have spawned at any given time. If you kill one, another will pop up somewhere else in an eligible system soon after. Before the high slot bug was discovered and wildly abused, the FoBs were starting to be pushed out into systems that had low traffic and were infrequently visited. Since so many have died recently, many of them are being reported to systems people live in, just as they were when it first spawned. The farming mentality also made it so that the FoBs wouldn’t evolve into their aggressive state where they sent out patrols to gank people on gates/belts or refinery citadels. The recent exploit fix/AI update was the best thing to happen to them at the time. FoBs, in my opinion, shouldn’t be allowed to be farmed at all in their current state as the rewards are not worth the effort- up to 800m for a fleet who kills it, up to 30m per pilot in that fleet. They should be left alone so they can get a chance to serve their purpose- take over systems and attack citadels that some corps have allowed to stay up despite never using them or being active. I think CCP still needs to iron out the mechanics/glitches and work on the reimbursement schemes for these sites, but other than that I believe they are a great addition to the game.

INN: That’s something to keep an eye on for sure. It will be interesting to see how CCP responds and if they change them again. I want to go back to how you got the BPC, you don’t have to disclose anything if you don’t want to, but in short, how did you manage to steal it from under their noses?

Concentrati0n: I had previously scouted and learned of the locations of all the Sotiyos in game, the one in Deklein was the one we were least likely going to form for. I had my alt logged in the system and was going to move him back to high-sec until I saw the structure was repaired.

I decided instead to make dozens of tactical bookmarks around and on the Sotiyo to warp to just in case it got bubbled, so that I had many possible locations I could warp to. 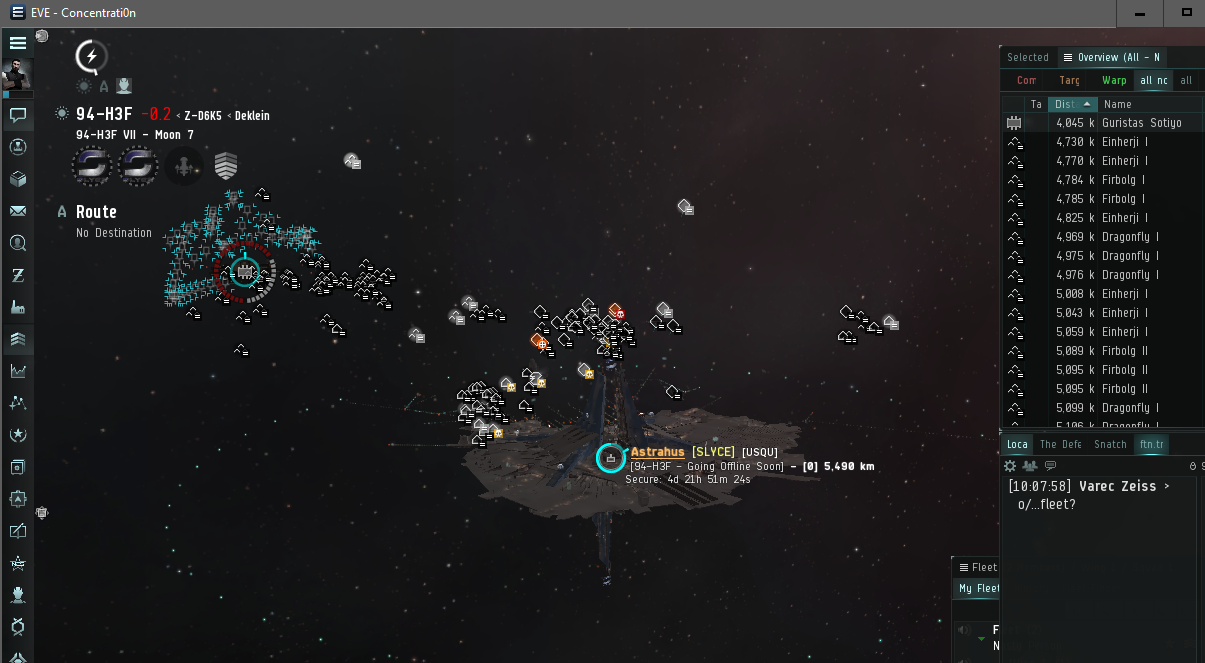 In addition to all the preparation, what really helped me was the small Goon bomber fleet that did a run on their Guardians as the structure was being held at 1%. This caused the Guardians of The Galaxy (GoTG) fleet, from my point of view, to prematurely bubble the structure, hold dps on the structure, and lose haulers/interdictors to NPCs due to this early/bad call. By the time the structure died, it was about 5 minutes before downtime, and the bubbles were expiring.  The chaos caused by that blue bomber fleet definitely increased my chances of getting away with the BPC. I would love to say I was incredibly lucky, but this wasn’t randomly generated luck. It was planned and it paid off. I had the idea, got off my ass, instead of giving complicated suggestions for someone else to attempt the heist, so I tested a plan I thought would work.  Being there awake and alive is what gave me a chance. Chatting with my coalition and inviting others to harass an enemy cap fleet and providing intel increased my chances of having a successful grab, while providing the people who came with content. Spending hours sitting there, making dozens of tactical bookmarks while slow boating around the structure on grid while stealth so there wasn’t a chance I would be seen also increased my chances. I would like to think there’s two types of people who would attempt what I did, the stupid but prepared and the ignorant and unprepared.

INN: Clearly being prepared paid off, a clear case of who dares wins. Is there anything else you wish to add, any other points or comments?

Concentrati0n: I don’t really have anything to add. I’m usually available in-game or on discord if people want to bounce ideas off me or get a better idea of the mechanics. So they should feel free to message me. I have suggestions on what CCP could do with these events, but I think everyone has an opinion on that.

INN: Thank you for that and have a good day.