INN Gets Hands-On With MetaArcade at PAX South 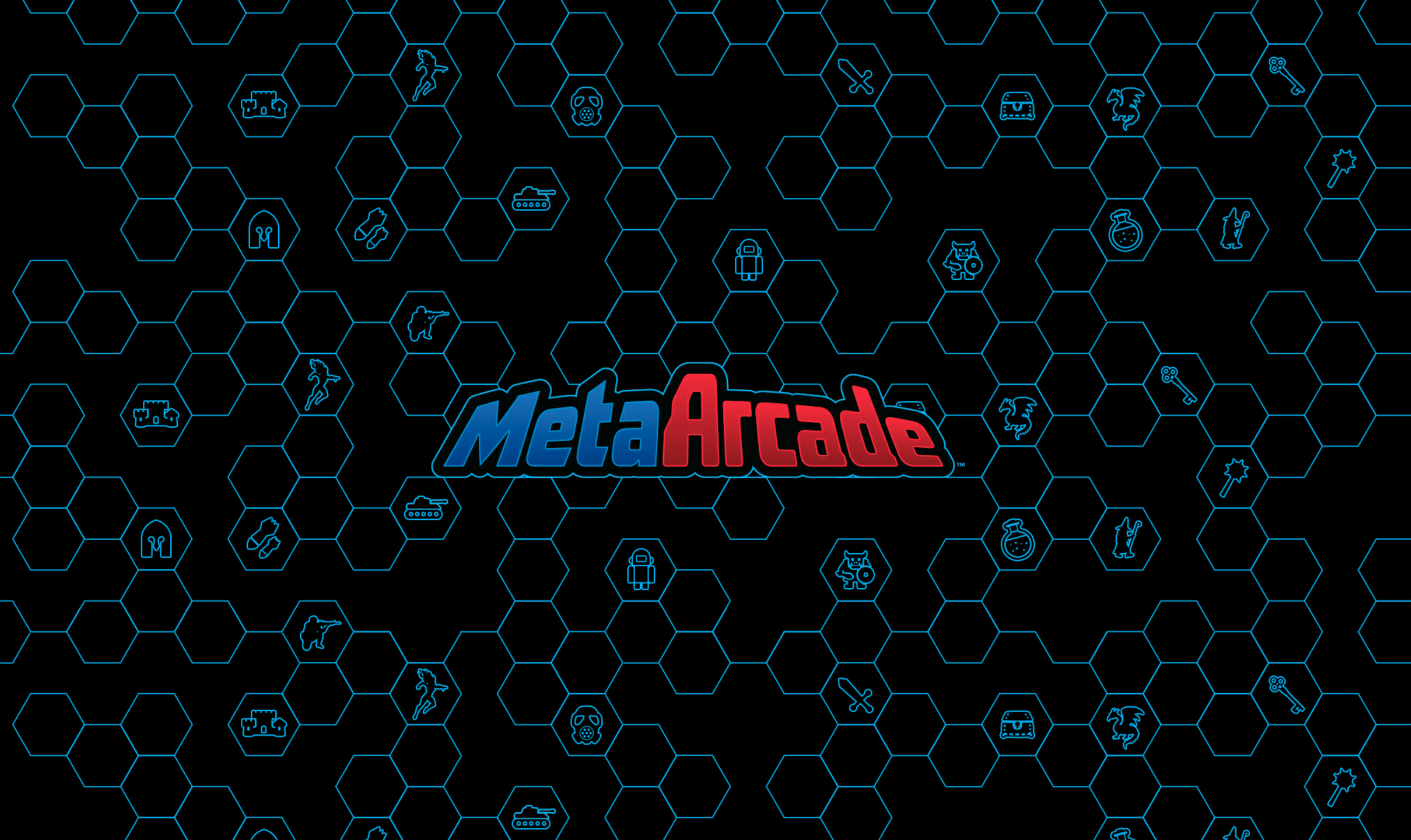 In the modern video game industry, “new” is a dated concept. Many of the most popular game franchises are based upon tried and true formulas that are nearly a decade old. In some cases, these franchises attempt a step forward, but the result is either minimal – or a step backwards.

For a while now, developers have seemed obsessed with the desire to minimize complexity and simplify already accessible models. In recent years, this has led games to a point where survival is based upon name recognition and brand hype.

But reaching into the past isn’t necessarily a bad thing. While much of what lies there is nostalgia, there are lessons to be learned by what has come before. About where gaming has come from, and where it has yet to go. 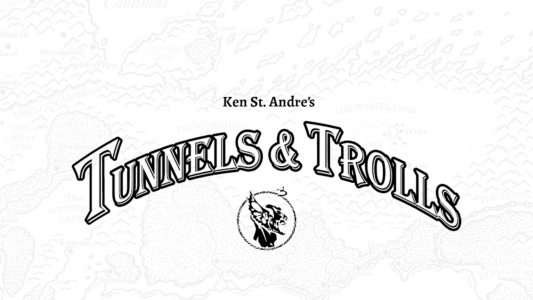 A man named Ken St. Andre reads the Dungeons and Dragons Player’s Handbook. He’s enthralled by the fantastical setting, but finds the rule set confusing. Interested in a similar setting with simpler rules, he creates Tunnels and Trolls – the second-oldest tabletop roleplaying system ever created.

Everything Old is New Again

In recent years, indie developers have reached into gaming’s past and resurrected much of what was buried there. Concepts long since retired by AAA developers are, once again, entering play, many to a cascade of delight from gamers wanting more from titles. This recent mix of new and old – modern and classic – is just what gamers seem to want.

MetaArcade is one such developer pulling from the past to fuel the future.

Founded in 2016 by David Reid, the Seattle-area indie developer is working on a platform to bring tabletop adventures into the world of gaming. I had an opportunity to visit with David at PAX South and experience the newly minted developer’s tools first hand. What followed was an interesting, and insightful, dialogue about where MetaArcade currently is in the creative process, and where they ultimately plan to go.

Before PAX, I was afforded a sneak peak of the MetaArcade platform (currently being tested on Android and iOS). 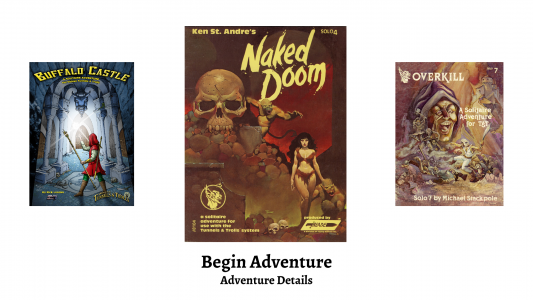 It’s fairly straightforward and sports a very modest interface. Only a few controls are available to the player at any time, but that’s okay. The Tunnels and Trolls system that MetaArcade has decided to use is, by design, extremely simple. User friendly. This takes pressure off of the player, and minimizes the number of rules and systems needed to play. This makes the two story scenarios currently available, “Naked Doom” and “Buffalo Castle”, more about the experience and the adventure, than the underlying rules.

Those used to playing tabletop games will find the simplified Tunnels and Trolls system a marked change. The reliance on six sided dice and minimal interruptions make play fast paced and absent of the typical off-topic banter that dominates many tabletop sessions. 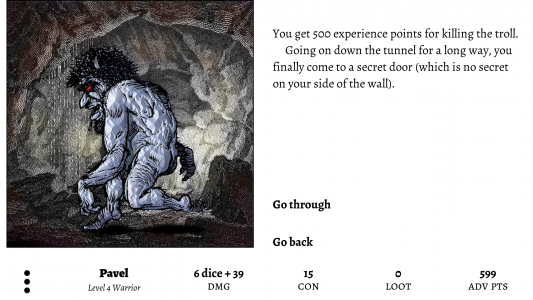 But even though the experience is a single player affair, the unparalleled feel of tabletop adventure is all too recognizable in what MetaArcade has created. It’s unlike anything I’ve ever played before, and I’m appreciative of the opportunity to have tested it so early.

Needless to say, I was excited to see what else MetaArcade was planning on showing at PAX.

PAX is, by nature, frenetic. Thousands of people come together over three days to share their love of games. And to play demos made available by a myriad of developers. Many bring the full might of their creative work to bear, with demos tailored to excite and impress. Most developer booths are awash with flashing screens and excited gamers lining up for a chance to play. 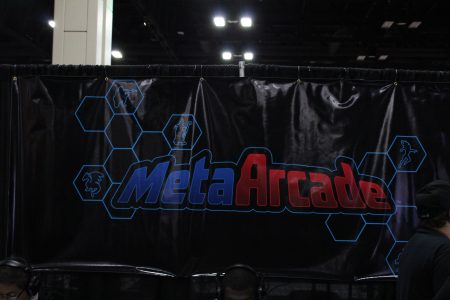 Amidst the chaos, the MetaArcade booth was a bastion of peace, but no less crowded. Instead of large screens awash with a collage of color and sound, were smaller handheld tablets featuring the adventure platform. Heads were hunched over the small screens, headphones donned to block out the cacophony of PAX. Every eye was glued to the adventure on the screen, enthralled by the fantasy world painted in text and dice.

On one side of the booth was a television screen with a simple interface sprawled across it. This was the adventure creator MetaArcade had brought to PAX. Here, they were making a separate mega adventure for each day of the show. The Friday adventure was complete and I had an opportunity to add a selection to the Saturday adventure. 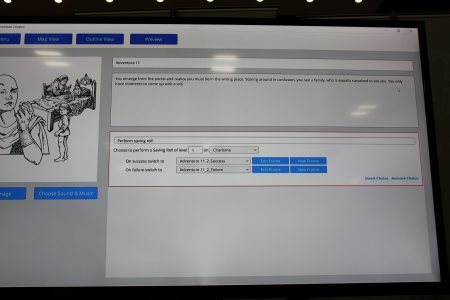 Mine was “Adventure 11” and featured a hero stumbling through a portal, and into the midst of a surprised family. From there, I worked with one of the developers to flesh out the small adventure. We outlined decision points, saving throws, and end conditions. It was a simple task, but quickly outlined the ease with which content creators would be able to use the tool to craft adventures.

A short time later, I had the opportunity to meet with David Reid to ask more pointed questions about the platform and the path forward. We spoke in the vacant booth across the aisle and, despite the thunder of PAX, David was forthcoming as he could be about the game. Especially considering the still early stages of development.

Tunnels and Trolls is the only system currently being used with the platform, and that’s because of its ease of use, David’s affinity for it, and the fact that it was the first system to feature solo adventures. Since the platform is in its early stages, there is still a lot of room for it to grow using the Tunnels and Trolls system – including jaunts into other genres (science fiction, etc.). But David says that “there’s no reason why we couldn’t take this sort of core technology and apply it to any number of RPG systems, or TV and film licenses. And, you know, public domain works. There’s a lot of possibilities here.”

And those possibilities extend to other aspects of the platform, as well. The game is being tested on Android and iOS, but will eventually be available on PC and Mac. I asked David how distribution would work and whether they would release on Steam. He replied that “if you’re going to be on PC, you need to make a smart decision about being on Steam or not. And for us, it makes sense [to be on Steam].” David sees the platform as a community-fueled project and thinks that Steam would go a long way in making sure that the community has a big say in how the game develops. As such, MetaArcade has already taken the steps needed to be “green listed” and anticipates entering Early Access when the game is ready to take that step.

And I expect that it will…eventually.

Since content creation is such an important part of the platform, MetaArcade plans to release the creation tools for free. This will allow anyone to craft adventures that will be available on whatever market or distribution system MetaArcade implements. When asked about how content would be policed, David replied that “in the beginning, this is something that you open up in a sort of ‘friends and family’ alpha testing way to a limited number of creators that you actually…have a personal relationship with, so that you can trust that they’re not going to do bad things. That there won’t be plagiarism and pornography and hate speech and stuff like that, right?” He went on to say that, in the future, automation might come into play. Or, that the community would have a say in what content would be most popular. But, generally speaking, it seemed that they were still early enough in the process that any option they chose to adopt would work with whatever adventures are developed by third party creators.

That being said, there is still a lot of groundwork in the Tunnels and Trolls system to start with, so there won’t be a lack of content in the beginning. And that’s a good thing because MetaArcade is “still thinking through monetization. Is it an advertising-driven model, where you watch ads in order to play an adventure? Is it a premium model, which is what most of us on pen and paper RPGs are used to – I buy and adventure at the store and I can play it forever? We’re still thinking through some of those things and it may be different for different kinds of content that we do, but the creation platform should always be free.”

As a tabletop gamer, one question that sprung to mind was whether MetaArcade ever planned on looking into the possibility of eventually making multiplayer adventures an aspect of the platform. David referenced the possibility of competitive and cooperative play in an adventure, but at the moment, it’s an idea for their roadmap. I, for one, hope that they decide to make it a reality.

Miles to go Before they Sleep

As the interview was wrapping up and I thanked David for his time, I couldn’t help but feel hopeful about the idea that MetaArcade was working so hard to develop. I’ve been playing tabletop games for years, but as I’ve gotten older, the opportunities to play seem to come around less and less often. And I think that’s why MetaArcade’s adventure platform surprised me – I wasn’t really sure what to expect, but it definitely wasn’t an experience so closely resembling an actual tabletop RPG.

And that’s what’s so exciting about the concept – a tabletop experience that players can take anywhere, or simply enjoy on their PC at home. If anything, it’s clear that MetaArcade has a solid base to work with, and a sky’s worth of space to play with. I look forward to how the platform develops as David and his team move forward. And I hope that they allow me to be the bard to their adventure as it unfolds.