How I stole ‘The Hunt’

In just a couple of days, I managed to steal more than 300 million ISK from players enjoying the latest event, The Hunt.

The idea came to me, like many great ideas, in the throes of boredom. My primary PVP character was waiting out a jump timer to redeploy to the north, with another stationed only for suicide ganks in high security space.

I had a long industry queue in null sec with nothing coming out anytime soon.

But there was another character, one not affiliated with any player-corporation, who could easily slide through high-sec systems unnoticed and wait, cloaked, in an event site.

The Hunt, like many Eve events that came before it, features a deadspace beacon where players can eliminate Gurista pirates to earn skins, clothing, boosters, and progression points in The Agency. Anyone can warp to the beacon and enter the site. Doing so uncloaked triggered the first wave of rats, but I always came in from a distance. I picked my spot, either directly above or below the event site by 50 kilometers, and waited for the next hungry PVE’er to arrive.

My low skillpoint character didn’t have the ability to both shoot the Gurista pirates and survive so I could finish the site conventionally. However, what he lacked in firepower, he more than made up for in the ability to pull off stealth hijinks that earned praise and anger from the pilots I swindled.

It happened like this: I would pilot my cloaky ship to the appropriate spot and wait. Wave after wave of Guristas would land on grid and be chewed up by Gila cruisers and their drones. Eventually, the battleship named Rakka Tahiri would arrive. This was my target. For the first few days, Rakka would land 40 to 50 kilometers from the event site, and my careful placement meant that I could easily burn to its location before it was destroyed.

It seems that the meta in high-sec is to be careless with loot. Many ratters sat on the beacon, unmoving, and without a mobile tractor unit. These were the easiest heists to pull. I merely had to remain cloaked and within 12 kilometers of Rakka then swoop in, decloaking myself on the wreck and quickly grabbing the loot into my cargo hold before warping away.

Other, more aware pilots made it more difficult. Here are two examples from my first day, both in the Lonetrek system of Litiura.

Site 1: Two Gilas are at the same site. I’m not sure if they’re together, but once Rakka appeared they both kicked on their propulsion modules and began burning toward it. I was closer, but had to remain cloaked at a paltry 358 meters-per-second velocity. The first Gila arrived just as Rakka exploded but only opened the can. I was easily five seconds behind, but I turned his hesitation into a 100 million ISK payday.

Site 2: Again, two other Gilas were running the site together. One burned toward Rakka when he appeared, but seemed to have missed the final blow. Not wanting to go suspect, the Gila simply watched the wreck as it flew away at 1,000 meters per second toward the other player’s mobile tractor unit. Now I was in a bind. I had already decloaked and given up my presence in the final second before the tractor activated. I watched it fly away, too.

Then, making a decision, and not to be deprived of my plundering rights as an Eve Online capsuleer, I quickly improvised. After clicking the button to open the wreck, my ship aligned along its trajectory. I pulsed the microwarp drive, then quickly set half-full speed to avoid overshooting it. Bang, boom, another booster and skin totaling 30 million ISK, and all without a shot fired in anger.

Despite the relative ease at which I plied my craft over several days, there were moments of maddening frustration. For example, in a well-traveled system I watched as pilot after pilot landed on the beacon and burn toward Rakka. You haven’t seen the insanity of high-sec ratting until you’ve seen a Machariel, two Gilas, a Stratios and Vexor fight over who could be closest to the Rakka wreck when it spawned.

There were also the suspect baiters. They and I were both pirates, but they were flying more well-tanked ships. I saw a Nightmare pick a fight with four other ratters and come out alive. A Northern Coalition Deimos went suspect by shooting another pilot’s mobile tractor unit. No one took the bait. The Nightmare pilot, Alis’c Zal, said that along with The Hunt bait kills like this Stratios or this 2.4 billion ISK Tengu, he also likes to go after PVE pilots running missions in in elite Marauder-class battleships.

“Marauders are a ship with much more PVP potential in high sec,” he said when approached by Imperium News Network. “But the difference between PVP-fitted and PVE-fitted ships is huge.”

By the third day of the event, it seemed as if CCP altered Rakka’s behavior. The boss ship began landing on the beacon, which made my job much more difficult. I’m still devising the best strategy to snatch the loot without being prematurely discovered.

Regardless of CCP changing the behavior and creating more of a challenge for me, I’ve enjoyed this style of gameplay. The great thing is that it’s easy, and the same tactics can be used elsewhere, in other kinds of PVE sites, to deprive a ratter of his or her hard-earned loot. Go ahead, try it yourself! 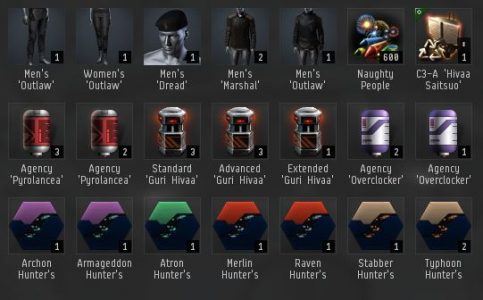 Just a sample of what I’ve stolen so far by plundering the boss wreck during Eve’s latest event, The Hunt.