There is aproximately 30 min remaining for the second Imperium Fortizar to online and begin its repair cycle. At present there are four Imperium fleets consisting of a mix of Typhoon battleships and Jackdaw tactical destroyers.

As with the previous attempt to bring a Fortizar online, the combined PanFam forces are expected to bring the hate in the form of supers capital heavy bombers. As of yet hostile forces and scouts are light in and around the Fortizar grid.

More coverage to follow as the fight gets under way.

20min to go on Fortizar timer.

[0155] Cyno is up! Enemy Supers from Panfam are on the field with Machariels in support.

[0209] Timer is out. Panfam fighters are on grid. Local is up to 2500+ and Tidi is holding. [0210] A handful of Sarcos Federation Tengus launch from the station and were hazed by the Jackdaw fleet. Fortizar timer is paused under the punishing fighter swarm. [0216] Imperium carrier wing has come onto the Fortizar field at the far side of the Fortizar from the Panfam forces. [0220] Local is holding just north of 2500. Clearly the node has been reinforced, as TiDi is holding in the 25-50% range. Fortizar remains paused. [0227] Imprium carrier wing has moved from the Fortizar to a near by Asterhaus, Imperium Typhoons have replaced them and the Jackdaw fleet has begun attacking the fighters directly. TiDi has now really kicked in to the fight. [0235] Some fighters are taking damage, but the real damage is being done to the servers. There have been unsubstantiated reports of computers that are logged off of Eve slowing down in sympathy for the system TiDi. [0240] Panfam Machs have started to direct volley damage to the Jackdaw fleet. Meanwhile reports are in that the Imperium Typhoon fleet is exacting a heavy toll on the same Mach fleet. Panfam FAX wing is now focused on keeping Machs alive under punishing missile fire. [0246] Socket closures are starting to become an issue (at least it was to me) I have returned to my fleet and have a twitch backup running to keep up with the news. [0258] Imperium Carriers are landing on the Fortizar again. The Fort timer remains paused (No duh right Froggy) but Jacks continue to punish fighters and Typhoons are still on the Mach fleet. A small wing of a dozen or so Scorpions from [B0SS] has now landed on the Fortizar, Not sure who they are yet. [0307] Someone has tried to shoot our fearful reporter, and I have warped off. Headed back into the fleet. Reports in from the FC that the GoTG Mach fleet has been more or less annihilated and is down to about 30 remaining on the field. Also while I was warping away, Test’s Nightmare fleet has arrived and is attacking… someone. I haven’t got clear intel on them yet.

We do have some gorgeous screen shots coming in though form the fight. Thank you Rose Knightly for the amazing combat journalism! 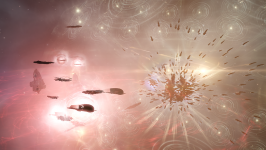 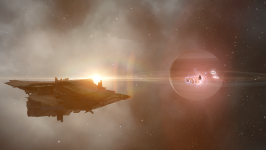 [0320] I have crashed again. Folks in coms are reporting somewhat better server performances but I am not yet seeing it. [0332] I have landed back on grid finally. I’ve asked who Test is shooting and since none of the FC’s know, I am just going to assume that Panfam is their target at well. ITs a fairly safe bet. There are definitely some smart bombs cycling out there now as well as ECM bursts. Fortizar is at about 35% as well. [0336] More Panfam Titans are now cynoed in. It seems that they are focused on trying to kill the Jackdaws. Typhoons are still on the field killing Machs. Intel reports that there are about 30 new Panfam Titans on the field. [0343] First reports are coming in of Super’s being cleared off the field. One Darkness Nyx is confirmed kill and another is in low armor. The Mach support fleets have taken massive damage [0351] The Fortizar is at 34%.  The “Paused” message isn’t showing anymore but the report is that it is actually still paused. [0402] Test has reportedly swapped to multifreq and has warped into 0 range and is going max damage against Panfam. [0407] The remainder of the Panfam Machs appear to be leaving the field. [0416] Fort to 16% The Imperium fleets are starting to extract from the field and try to do some repositioning. Mittani has been reported as killed but I haven’t yet seen a kill mail for him. Huzzah for fearless leader being on the field to inspire the troops. [0434] Fort grind is still on. I am much too far to get an accurate reading on the % anymore. There is still a large Panfam super/titan fleet on it. Dreds and Carriers are sluggin it out at close range quite some ways away from the supers and titans. The Jackdaws have been warping in and out and have started to pick off light tacklers while Typhoons and the remaining Machs trade kills under triage FAX support.

So here are a few more of those photos from Rose Knightly. 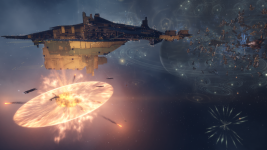 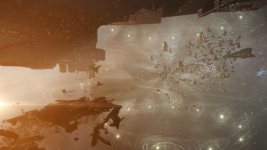 [0445] It appears the fighting is wrapping up and the Imperium fleets are starting to withdraw.

Here is the first moderately populated kill report from the battle. Obviously there will take a little while to get the reports updated and sorted. I don’t want to speculate on who did what and was it effective. I’ll leave that to the propagandists. I hope you have enjoyed the from field reporting. Please make sure to give love to the streamers and photographers who risk their computers melting under these conditions.

After a turbulent week of protests and general unrest...