In a backwater region of space, a single vessel embarks on a tireless crusade to bring Justice to the people. In an indistinguishable system, another ship undocks, bristling with mining lasers, to make its way to a nearby asteroid field in search of hidden riches. And elsewhere, a third craft sets off hunting miners, traders, and merchants; a captain out to make name for themselves as a pirate, the law be damned!

Welcome to Rebel Galaxy, a  new spaceship game from Double Damage Games that offers a sandbox experience in a single-player package. That package comes complete with a story you’re introduced to in the game’s opening sequence, but it’s one you’re free to explore or ignore as you see fit. The story itself begins with a classic enough hook: An aunt you haven’t heard from in a while, with a shady reputation, contacts you out of the blue to ask for your help. They’ve transferred the title and location of an old ship of theirs, and have asked for you to meet them at an out-of-the-way location in a rough-and-tumble section of the galaxy. The game opens with your arrival, and introduces you to an old associate of your aunt, who tells you she’s been missing, pretty much since she sent that message. 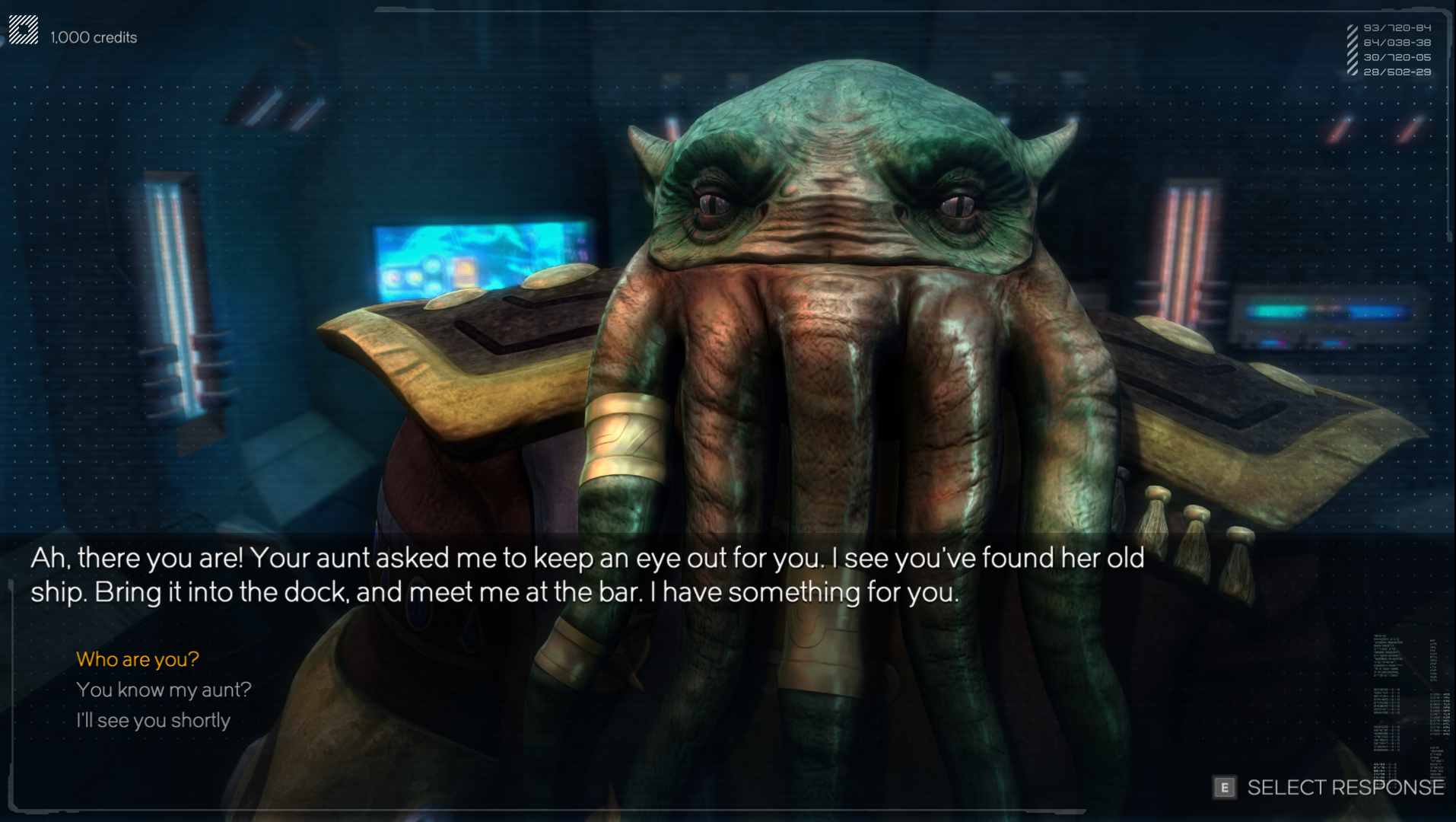 And with that, you’re off! But, it’s important to note: you aren’t even forced into that initial meeting. So while the story serves as a good hook to get you into the action and step you through the learning process, even that first stop on the way can be sidestepped in favor of making your own destiny. The first time through, of course, it’s a good idea to follow the story. The exploration and progress built into it helps to give you a solid framework for finding your footing in the game.

Naturally, those first steps happen out in space. The action takes place in a set of star systems, connected by jump gates. The systems themselves, jump gates, and stations within the systems, and of course the storyline remain static from one game to the next, but the rest of the game is procedurally-generate. This means all of the missions change from one game to the next, as do the locations of resources, like asteroid belts, and ice fields, and even traders, invasion forces, and other points of interest in space.

But space is a dangerous place to go exploring, and one of the very first things the tutorial messages will tell you is that “Combat in Rebel Galaxy is naval style – which means broadsides’. They’re not kidding; the action happens almost entirely on a level plane. Small NPC craft, like fighters, have a degree of vertical movement, but capital ships — including your own, no matter how small it can feel — move only two-dimensionally. 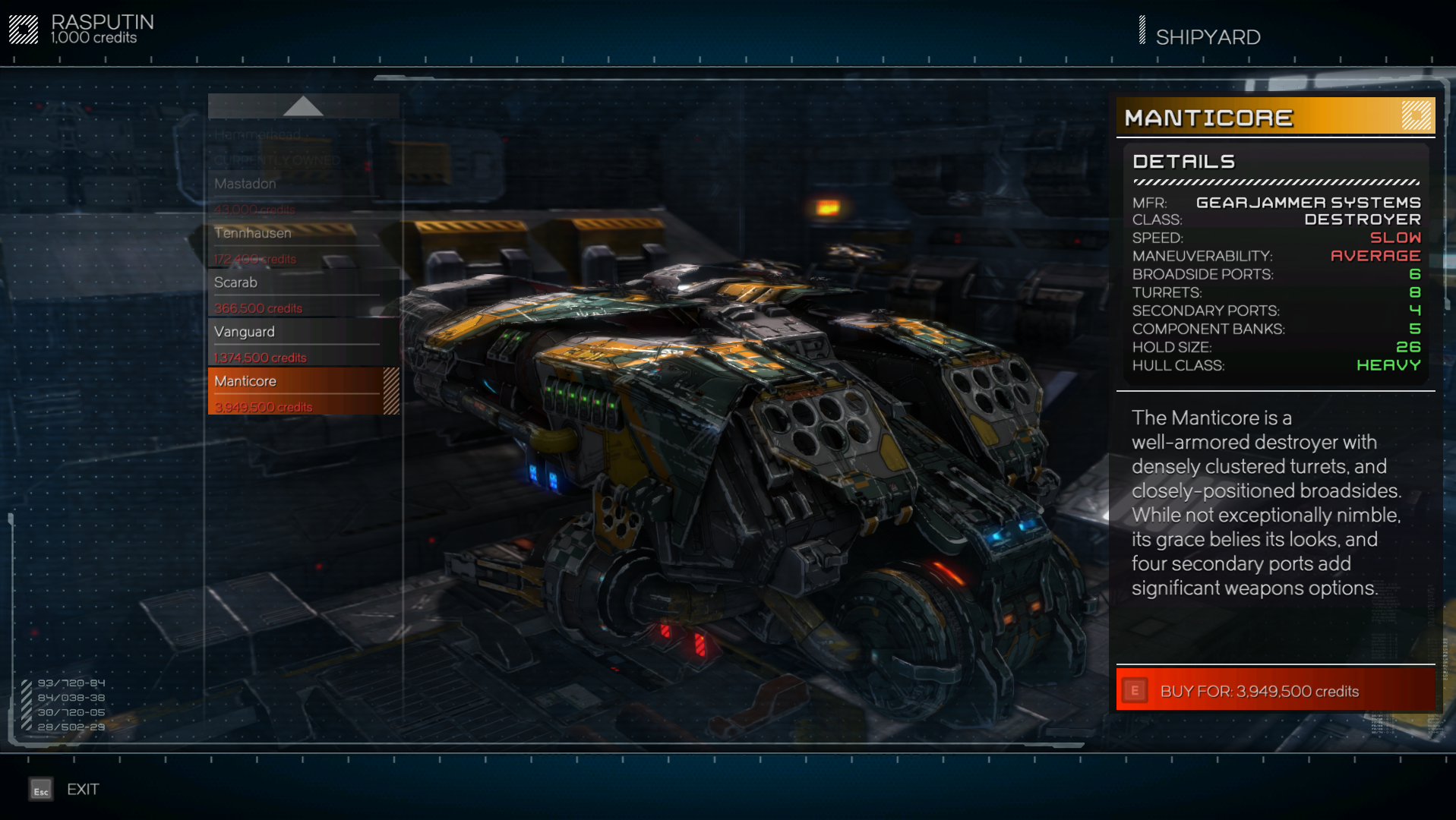 The most powerful weapons on your ship are all mounted as broadsides, with the number of weapon ports determined by the specific hull you’re flying. This is also the only weapon port on the ship that is purely offensive in nature. In addition to the Broadside mount, ships in Rebel Galaxy have a Secondary weapon system, and a number of smaller Turret mounts. Both the Secondary and Turret mounts can hold either offensive weapons, like missiles, or defensive systems, like flak launchers to protect against incoming missiles or enemy fighters. The Broadside and Secondary systems are strictly player-controlled, but the turrets have an available AI with multiple settings. The range of AI settings allows you to set them to focus fire on your current target or allow them to fire on targets of opportunity, helping you to defend against fighters.

If it sound like a lot going on at once, it can be. But Rebel Galaxy’s manages to present the information with an easily-understood, minimalist UI that’s both flexible and simple to use. The UI is robust enough that it’s possible to navigate through the entire game without taking your right hand off the mouse. Everything you need on the keyboard, from choosing which weapons system is active, to upgrading your ship, or buying and selling commodities for transport, can be done with the left hand on the 1234/QWE/ASD axis. 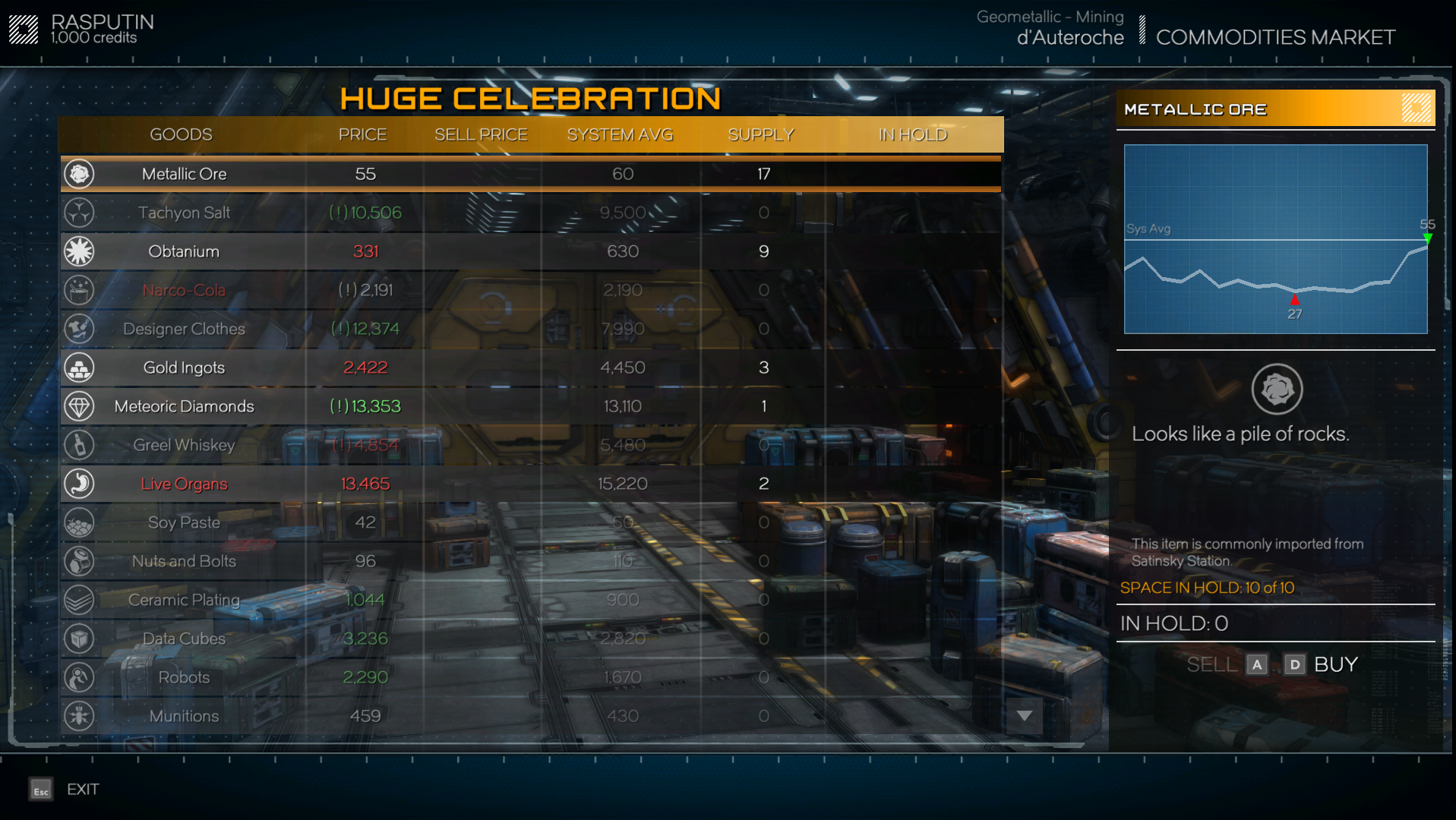 The graphics and sound work in Rebel Galaxy are a great fit for the setting. Each alien race has a distinctive look, and in the fully voice-acted interaction, they speak (what at least sounds like) different languages. The humans are rough-hewn slabs of frontier hardiness. Ship designs range from sleek to industrial, and hulls produced by the same corporation follow easily-recognized structural themes, and when they die, the fireball of destruction leaves in its wake chunks of debris that can set off collision warnings. The soundtrack, too, supports the immersion, with bluesy acoustic riffs that switch to a fuzz-laden electric growl when things get tense.

That’s not to say everything is perfect with the game. It’s easy to get in over your head, and for a mission to be a lot more than you can handle. When that happens, you’re probably dead – but the game auto-saves every time you undock, so recovery is fairly easy, and the missions don’t have time limits. So if you run into something you’re not equipped to handle, you can put it off while you fatten up your wallet and improve your ship build.

Another minor annoyance is the saved game management. Maybe because the game automatically updates your save whenever you undock, there’s no way to manually save a game. While not more than an inconvenience, this does make it impossible to copy an active save in order to back up to an earlier point. As a result, all decisions are final – there’s no running your reputation with a given faction deep into the red, then deciding to back up to undo what you’ve decided was a horrible mistake. If you start a new game, the old save is preserved, but for each play-through, there’s only one save file preserving your most recent update.

The deeper mechanical elements of the game are also poorly explained. The player is left on their own to find the settings for turret AI (they’re in the ESCAPE menu), to know how the various Secondary and Turret defensive systems properly used (Flak systems are most useful when fired off multiple times in succession, rather than once per incoming volley, for example), and a number of other facets.

Even in the face of those minor flaws, though, Rebel Galaxy looks to be a solid single-player entry into a genre rapidly filling with multi-player offerings. While it may not feature the slick ship design of Star Citizen, or the massive combats of EVE Online, Rebel Galaxy does give its players something none of the other recent offerings do: a sandbox game where they can get their fix for explosions and making money in a quick, limited investment of time. If you’ve got half an hour, you can get in a mission, maybe two. And if you have more time, longer missions and battles await – all in a backwater cluster of systems in a part of the galaxy where decent people are scarce, but opportunities abound.

This article originally appeared on TheMittani.com.