A July 21 patch yielded a surprise for capsuleers as CCP debuted a new memorial structure at the Molea Cemetery for Fallen Capsuleers. The new memorial is three basalt columns, floating in a triad around a beautiful cyno-visual orb with a pulsing ray of light traveling through a statue of a pod carried by spirits. As with previous iterations of the Molea Cemetery, any cans dropped within 200km of the site will not despawn, allowing fallen capsuleers to be commemorated within the game that they loved.

For players who have never traveled to Molea to see the cemetery, it’s a beautiful system on an arm of of the Khanid region, at the gate to Kor-Azor. It’s remarkably quiet, and at the time of writing, there are only two player structures in the system, one of which appears to be focused on providing funerary services. The memorial is situated off of the first moon of the second planet, and it has an individual celestial marker for players to warp to. When a ship arrives on-grid, they’ll see the memorial, but they will also see lots of cans anchored above the memorial. Each can represents a player who has passed along, and like many real-world memorials, it can have a significant emotional impact, as many capsuleers find themselves overcome when reading through all of the cans. 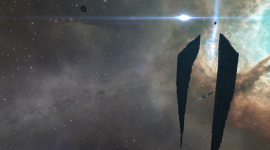 The Heart of the Cemetery

“I’m just honored and a little embarrassed by the attention,” said Azia Burgi, the founder of the original 2007 memorial, who showed up in Molea to see the new memorial structure. “Hearing the news made me login for the first time in two years,” she continued. “I’d been hearing rumors for the last few years but nothing had ever come of it. [It was] a complete surprise.” Her name was splashed across the game updates as the founder of this project, which has meant so much to a lot of capsuleers. “I’m really shy in real life, EVE helped me through the rough patches… I’ve got about 100 EVE Mails from people over the years saying that visiting here helped them remember people they lost in real life.” Those responses, she added, help give her the energy to continue the cemetery after all these years. The several dozen people in system engaged Azia in conversation and thanked her for her work. 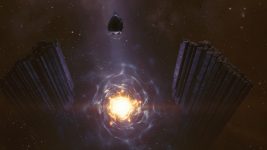 “My friends deserve the biggest credit, they kept the tower fueled and defended every day: Linara Faerin, Jay Marshall, Kenny Ray.” Even though the old POS has been replaced by an in-game memorial, she said that their work continues. “Someone has to come here to tend the graves.” She’s already interred 1,804 corpses of player corpses in 1,746 graves, and has another 24,000 cadavers to go. The work will take an age, as 30 or 40 burials are conducted at a time, and Azia thinks she’s still working through clone bodies from the last war.

Asked how it all started, Azia said, “In the early days, there was a leftover cathedral in Kor-Azor Prime and I just anchored cans there for the corpses I found when traveling up to Jita. I told myself I was keeping the space lanes clean.” Over the years, the community rallied around the effort, adopting not only the cemetery for in-game losses but out-of-game losses as well. When asked how she reacts to people mourning the loss of friends from real life, Azia said “It is going to sound cliched, but immense sorrow. They were hurting and turned to me to help them ease their pain. I had no idea my little hobby would give them comfort.” 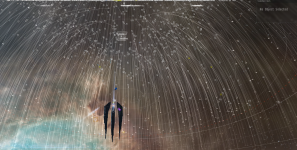 While she doesn’t think it’s her place to handle commemoration of real life fallen capsuleers, she’s grateful that her hobby now has a permanent fixture in New Eden. “I’m not sure it has registered that this will now be here forever. It’s just nice that everyone can now enjoy my contribution to the world.”

For capsuleers who would like to be interred in the cemetery by Azia, she accepts contracts of corpses. The organization managing the day-to-day operations of the cemetery can be contacted in-game in their public channel ‘eve-cem’.