The August Monthly Economic Report was released last weekend and it still says Goons made more ISK than that nice lady who won in the Powerball Jackpot a few weeks ago.

The call to arms was announced and the Imperium went to war. The industrial machine of Delve began the slowdown that only war can bring. Early in the month, the curiosity of what the August numbers would be began to bloom.

I know we mentioned on last week’s Whiskey Gaming Show that we thought perhaps some of the nerfing CCP had done was working to curb ISK growth. (Here’s my shameless plug. Join us next Saturday (19:00 EVE) where I will make vodka coffee with Kahlua whipped cream live.)

I was thinking on the numbers more and I wondered: is it perhaps because Delve took a little siesta in August that the numbers look a little tamer?  I did some experimenting with the charts and it was less than interesting. Even with Delve pumping out its normal bounties, most of the numbers don’t change.

Let’s face it: Delve doesn’t export much. They import a good bit but not the most. Does this mean Goons have created a micro-economy within the game? Have they achieved self-sufficiency? We know everything needed to build is not found in Delve but do they have enough of everything else.  I would say the numbers speak for themselves. Delve is an economy unto itself. Goonswarm’s main import seems to be more players.

There is some troubling data in the MER this month. Namely in the economic index area. 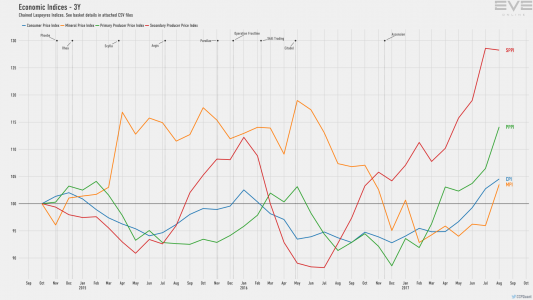 Indexes are always a challenge, so take the word troubling with a grain of salt. Any radical change like we are seeing above is not generally good. A good bit of this is likely linked to pre-gaming the market before Refineries. CCP moving the date up likely avoided months-long market volatility. 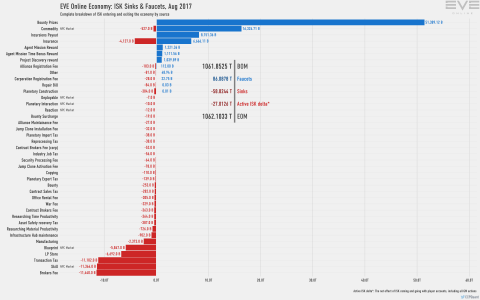 We remain wildly out of sync in relation to ISK faucets and sinks. I want to temper that a bit with due to the nature of online games you do not want parity. But, we do need a little balancing in that area.

In general, we are looking at a rocky economy for the next few months. You don’t need the MER to tell you that. What will be interesting is how the MER reacts to the volatility.