Editors Note: This article comes to us from Adrian Vexier

Life is an interesting experience. We sail through it, most of the time not thinking about its end. We consume its joys and sorrows, oblivious to its ultimate and implacable finality. We rarely get to know when we’ll experience our last hug, our last kiss, our last gaze into someone’s eyes.

But sometimes we get to know when the end comes, and we get to do the things we always wanted to do.

This is the case for an EVE Online player whose character name is Chappy78 Chapman. In real life, Chappy is fighting an unforgiving medical condition. Among Chappy’s life wishes was to have one big EVE fight for his birthday – one fight to bring out the best in him and the best in us – one fight to resound through New Eden and through time, into the history of EVE: Chappy’s Summoning.

This was a unique and exhilarating event for all who took part. I’ll always remember hearing about it on “Talking in Stations” 15 minutes into the event, double and triple checking if it was taking place live, then putting together a pair of ships and blitzing them to the Tunudan system where the battle was to occur. The trip there was exciting in itself: coming from about 20 jumps out, jumping in haste without taking time to scout the gates for campers, the whole trip questioning if I would get there in time.

The last leg of the journey went through the Kulelen system, which is fitting – as a Triglavian-invaded system it sits at the cutting edge of EVE lore. The jump into Tunudan brought the first pleasant surprise: around 1900 players in-system at the time of my arrival, with many more to come and 90% TiDi in effect. I quickly proceeded to create a few random system bookmarks just in case (“quickly” being more of a formal choice of words here, as the 90~95% TiDi made sure it took me 10 minutes to jump between three celestials).

After this logistics drill, I warped in to the main location for the battle: The Tunudan Sun. I was greeted with a brief game freeze just as I was approaching the 10,000 Km threshold of my warp, only for the game to pick up again and present me with a truly awesome sight: in front of me lay a massive, tightly packed battle blob, comprised of what must have been at least 1.000 on-grid ships (at the low end), and already as many wrecks. I was pleased to see ships of all kinds and classes, ranging from the most modest corvette, to snappy cruisers and destroyers, to sturdy battleships, to the mighty Rorquals, Phoenixes, Naglfars, Zirnitras, and later a Leviathan.

The blob was flashing red and yellow from the flag system. Everyone was shooting left and right, some cleverly positioned capital ships were smartbombing everything around them to oblivion, some kindhearted capsuleers were repping others, some were drone swarming, and some were target painting and disrupting. But we were all having fun.

The fight lasted for a full 3-4 hours, with no shortage of ships being fielded and ammunition being expended. I’ll always remember zkillboard’s page for the system being rapidly updated, faster than the main page for the whole game is usually updated. Then zkillboard itself fell victim to the fight, halting updates at 03:57 EVE time on a Thorax kill and staying in this neuted state for the rest of the EVE-day until shortly after down-time. I’ll always remember listening to a Twitch broadcast of this battle, where Chappy was present and speaking along with a handful of other EVE streamers and content creators, and hearing him recount his EVE experiences and encounters with other players. I’ll always remember the other players talking out of the goodness of their hearts and encouraging him to look forward in his life.

At one point, a streamer noted a Marshall kill that had a special meaning for Chappy. The pilot of the battleship – a well-known Wingspan wormhole hunter – came to the battle unbeknownst to Chappy, who became emotional when he realized that Wingspan showed up and spared no expense, fielding a bling-fit Marshall for the occasion.

As an adult with real-life obligations, interactions, and relations, I play EVE mostly for the fun of it. But damn it if I couldn’t help but feel a sting in my eye, a lump in my throat and a wrinkly chin when I heard Chappy’s reaction.

Congratulations to Chappy, to the game developers, game masters, ISDs, all of CCP’s staff, and all of the EVE Online community for answering the call of one player to gather and bring the best of themselves, have fun and entertain each other, and just be human together in a virtual world at a time when we are so divided and separated in real-life.

This event will forever be etched in the history of New Eden and the greater gaming world. It was organized on a dime, in a splinter of time, and rose to greatness out of the goodwill and kindness of more than 2,000 players on a single game shard. This event now exists because it can, not because it must. It exists because we chose to make it so. Two thousand players chose to take a simple idea and turn it into an epic reality. And that is something to be remembered and treasured.

I leave you with pictures taken in this battle. 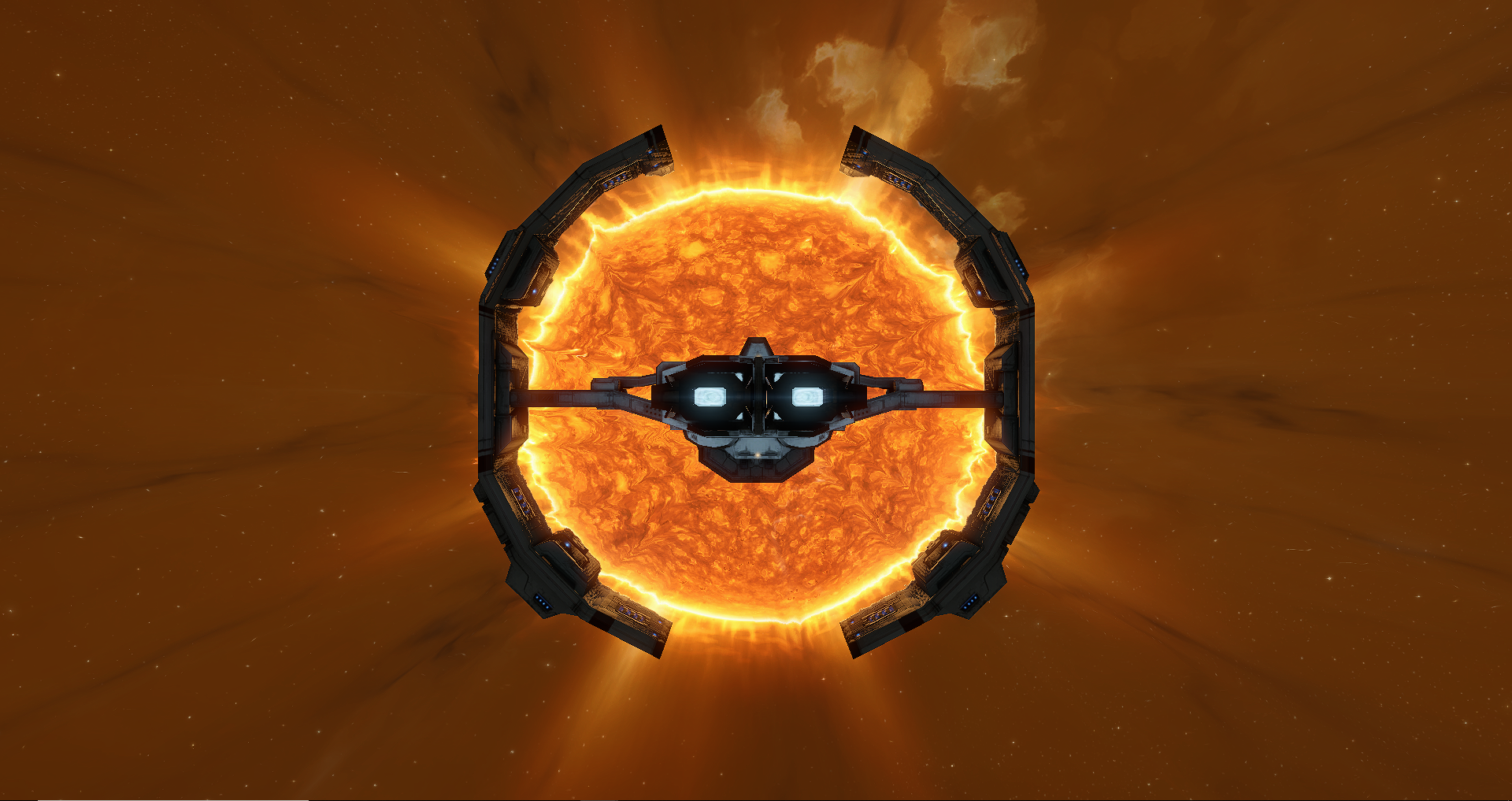 You can see more of Razoriens images of the event here.