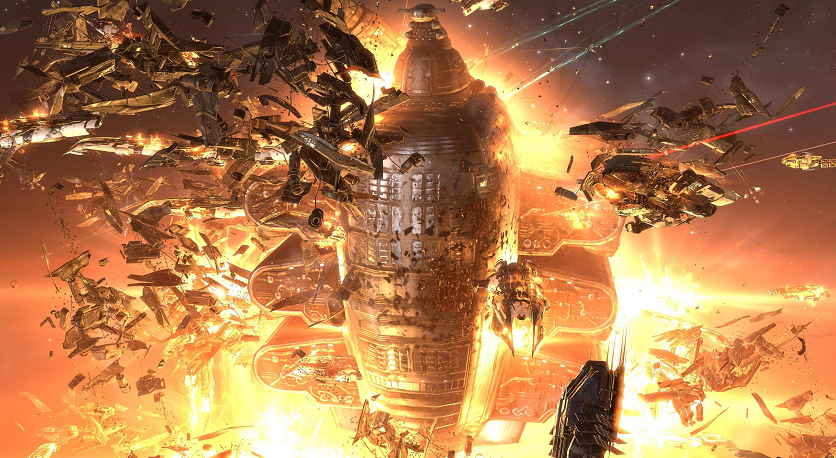 The fourth iteration of the Imperium’s regularly-scheduled Burn Jita event has come and gone, setting new records for destruction in MMO economic warfare. Running February 24-26, this year’s event, Burn Jita 4, saw the destruction of over 140 freighters, and 300 smaller vessels. The Imperium pilots inflicted 776 billion InterStellar Kredits (ISK) in damages. The current rough exchange rate of ISK to real-world money via PLEX means devastation marks the equivalent of as much as $15,000 USD, or €14,000.

EVE Online is unique among large-scale MMOs. The entirely player-driven economy is one of the longest-running and most complex large-scale economic simulations ever run. CCP previously employed an economist to oversee this, and presently there is a monthly economic report produced showing balance of trade for each region, and the game as a whole. Jita is the primary trade hub for that economy, with over 17 trillion ISK changing hands daily.

Burn Jita 4 was an immense organizational and logistical effort, involving over a thousand pilots using over 40,000 different ships for suicide attacks on freighters and other cargo vessels. Every ship involved in this year’s Burn Jita—both pirate and victim—had to be built by players, from materials gathered by players. In addition, unlike most MMOs where death is a minor setback, when player belongings are destroyed in EVE Online, they don’t respawn. A ship lost has to be replaced.

Because of this, Burn Jita not only represents a massive economic interdiction, but also provides a considerable economic driving force in its own right. The Imperium, with over 25,000 members, is uniquely capable of mounting such an operation.

The Imperium is the world’s largest online gaming organization, with the central alliance, Goonswarm Federation, having hit twenty thousand members only a month ago. In addition to playing EVE, the Imperium also has a presence in other online games, including PlanetSide2, Archeage, Atlas Reactor—including a successful tournament team—and H1Z1 where they run a large server. As a large, world-wide community, they hold regular meetups for members where lifelong friendships are forged.

Those bonds of community allowed for this year’s Burn Jita to be shrouded in an elaborate, multi-layered series of deception, conspiracy and misdirection. Even as most of the game believed the event would be delayed or cancelled, internal preparations continued. This allowed this year’s Burn Jita to be an overwhelming success, even as it was expected to be a failure by enemies and detractors of the Imperium. The target totals were not only met, but exceeded. Details of the losses incurred by the victims of Burn Jita can be seen below:

The Imperium has run a ‘Burn’ event for 5 of the last 6 years. Burn Jita 3 took place in 2014, with a different trade hub targeted for 2015’s Burn Amarr. Each year, the destruction has reached higher levels than before, and with this year’s record-setting totals, many within the Imperium are already eagerly looking forward to next year.

For more information on Burn Jita, the Imperium, and EVE Online, visit the Imperium’s gaming related news site at http://imperium.news.