The Blazing Tribute to Blaze – Minus One Geddon Fleet

For those of you who are unaware, a member of the CCP staff nicknamed “CCP Blaze” unexpectedly passed away in November. CCP Blaze was a Senior Software Engineer working on the Audio and Graphics of Eve, and as a long time member of team TriLambda he worked on what you see in space around your ship, from warp tunnels to in-game overlays, in an 8-year tenure at CCP. Blaze’s cyno was lit on November 14, during a vacation in London. He was 35, and is survived by his fiancée and young daughter.

Imperium FC Asher Elias decided to create a tribute to the fallen dev upon hearing the news, and in mid-December he ran a fleet comprised mostly of Armageddons, CCP Blaze’s favorite ship. I caught up with Asher in the days following the fleet, and he was kind enough to give me the detailed story. The following is that interview, unedited save for some minor readability alterations.

Johnny Crowe: I was tasked with writing a piece on the Geddon Fleet in Honor of Blaze, and while I hate to bother you. I was hoping you’d give us an interview.

JC: It was a fleet dedicated to Blazes passing, who thought up the idea for the fleet?.

AE: The idea came to me when I saw we had a final timer 6 days later on an astrahus and I saw the annoucement for CCP Blaze’s passing and that his fav ship was the geddon so I did some brainstorming in the reavers channel and we came up with a fun high DPS fit for it. The 6 day timer gave me plenty of time to figure out all the fits and get enough shipped down to have ships for all 100 of our guys. We didn’t have any armour ships up north so we had to bring in boosters, logi, support, everything. My entire reavers fleet in CCP blaze skins. 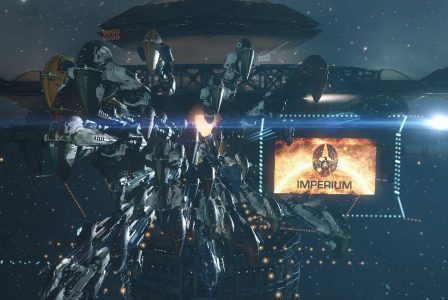 Editor’s Note: For anyone interested in the tribute Armageddon fit, the EFT block can be found at the very end of this article.

JC: Was it pinged to all of GSF or did it grow freeform style?

AE: The ping went out to the sigs and squads deployed in ROIR up north. We had dropped a citadel in GOTG space in YZ- to come out roughly equal to the final timer in DW-T so we had a few options.

JC: I see you got dropped. How did you pick the initial engagement, and how soon into the fight was the cyno lit or did you fight on a cit and get undocked on?

AE: The cyno was lit almost immediately after their fleet jumped the gate into my fleet. We knew the caps were coming so we weren’t surprised. Horde came to kill the DW-T citadel with a mach fleet at twice our numbers and had a lot of cap support including triage, haw dreads, and carriers so we knew our BSes would get murdered if they were thrown into that. On top of that the GOTG typhoon fleet moved halfway to the YZ- citadel and stationed some caps on it, but they left the typhoon at max jump range for the DW-T timer, so we knew if we went to DW-T they would bridge in and reinforce the horde force that was already far too big for us. I told the guys that this was a one-off fleet and we were most likely going into the meat grinder but we decided to bridge into JU- and make a run for YZ- since the GOTG fleet would have to follow us most likely, they would have to keep some caps on the citadel to keep it from onlining and the Horde fleet didn’t have a titan bridge to get within range. We knew the gotg fleet still greatly outnumbered us and would have triage support making the fight pretty much impossible to win but we intended to take this fleet out and no one is going to give you a fair fight if they can avoid it so we went to go out in a blaze of glory.

JC: I saw the comps and the ultimate ISK numbers but this isn’t an ALOD, so tell me how the fight went sideways.

AE: During the fight we kept one neut on one of their triage (he posted on reddit how annoying it was) so they brought in more after just dropping one, and we have griffins with minmatar jammers hitting their typhoons and our ‘geddons had target spectrum breakers and damps, so we made it as painful as possible for them to kill us. But they still had a lot of carriers and cap support that we couldn’t deal with so we were taking a lot of fire. We tried to break the first triage but he held so we went on typhoons, we were killing them with good success (our ships did 900 DPS each) and usually getting them before the triage/logi could save them but they were killing us much quicker so our overall DPS went down to the point triage was a guaranteed save. At that point we went for smaller targets and then eventually we were down to a handful of ships and couldn’t break anything and I just told everyone to fight till the last.

JC: Any notables from the fleet you care to give props to?

JC: Finally thank you for taking the time to give us the scoop. Much appreciated sir.

While this isn’t an Awful Loss of the Day, I would be remiss not add in the battle report from the fight. In a true sacrifice to the fallen, the Geddon fleet went out in a Blaze of glory. From another report I’ve received, the entirety of the Reavers Special Interest Group (a very ‘hush hush’ community within the Imperium ranks) also has full Blaze skins for the Ishtar and has run another fleet with 100% skin compliance.

All I really have left to say is, sometimes you get the bear, and sometimes the bear gets you.