There has been a lot of noise about the regional information available through the Monthly Economic Report and the intel that it gives away to people. There exists, however, a far larger source of intel—the ability to see job hours in Eve on an hourly basis—which has been used by Goonswarm Federation’s Financial Cabal for years to track information across New Eden.

I spent a bit of time (ok, a lot of time) chatting with Probag Bear this week. Probag is the player behind last year’s ‘wall of PLEX’ incident, and one of the people who helped efforts to calculate correct system index multipliers. He provided me with a mammoth spreadsheet of close to 3 million cells with data from across New Eden. He also provided the script for calculating job hours from that data, which has been run by people who know a lot more about coding than me.

This information is available through CREST and ESI, with a bit of calculation added on by the user. I will show some examples of what I mean, and what can be done with this data, although the value of knowing when job hours in a system increase is fairly obvious.

Let’s have a look at some examples first, so you know what we are talking about: 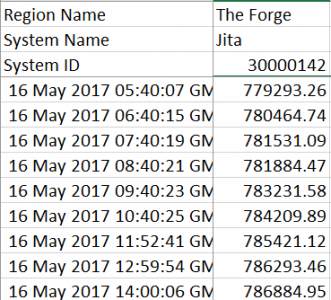 This shows the job hours in The Forge, specifically Jita, for a period between 0540 UTC on May 16 and 1400 UTC on May 16. It shows that between 0640 UTC and 0740 UTC, one thousand job hours were added in the system. This means that during that period (between the CREST pulls) industry jobs totaling 1000 hours were installed. At 0940 UTC you can see that around 1500 hours have been added, this is when early EUTZ people pop in, and AUTZ players are also hitting their peak hours.

So, it shows Jita is busy, so what?

Let’s take a look at another system, this time I am not going to name the region or the system, for reasons that will become obvious. 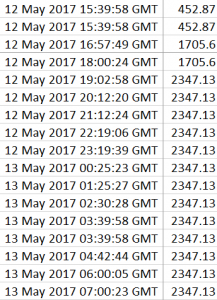 This is an unnamed system in nullsec, and what is being shown here is that between 1539 UTC and 1657 UTC May 12 someone installed 1279.8 hours of industry jobs. This is around 53 days of industry jobs. It is not a super building, as it is not in Sov null, but, plenty of big things that are not supers can be built.

This is the same system this morning:

Let’s look at a sov null system this time:

How does this work? It is actually scarily simple.

CCP provides the cost indices for every system. The cost indices do not however directly give you the job hours in a system, but we know the formula for the calculation from CCP:

So, the calculation is System activity Index = Square root of System job hours/global job hours. It is not quite the System Cost Index, as there is another factor involved, the System Index Multiplier, explained here. This value should remain constant for each system, but can easily be pulled from the API.

This leaves the problem of how to find Global Job Hours. That is relatively easy to find. You grab a system where there is no building taking place, drop a POS, install a known number of Job Hours (say, 1000), and wait for the data to show on CREST. What will show up on CREST will be the system cost index, and if you know the System Index Multiplier and the Job Hours you have just installed, you can stick them into the equation.

Once you have global job hours, you can calculate for every system in Eve, every hour.

Limitations of the data

That means that once jobs are registered, they have an effect on the manufacturing index for 28d. There are also some delays in job hours filtering through to the API, usually for systems that have not been used recently. Job hours for these systems filter through 50% at a time over several days, but ultimately, this has little effect on the usefulness of the data.

The availability of this data is not a bug. It has been available since Crius hit. Until Engineering Complexes hit at the end of last year, though, it was of limited relevance. Now, you have the possibility to explode your enemy’s structures. There are legitimate questions as to whether this level of information should be available to players. Right now, however, it is. There are several people who have the script. Others are prepared to pay well for information about certain regions of null—which should surprise no-one.