Well, it seems that Shnookumms from NC. is not having a good return to Eve. They seem to have had a little bit of an incident in the system of Tabbetzur. This resulted in this impressive single loss of a 232 billion ISK Leviathan. For those lucky enough to be on the kill around 50 billion dropped which is still not a bad amount for those able to pick up the loot. 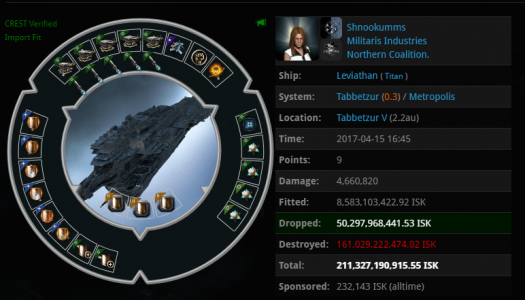 There are some potentially interesting elements to this kill though. The first interesting bit is that this all happened in the region of Metropolis. The reason that this is interesting is that it does not match up with the NC. home region of Vale of the Silent or where they are currently staged in the north-west in their attempt to kill The Imperium members The Initiative. This point can be underlined given that the last kills seen with this character were in the Deklein region during the Casino War back in May 2016.

In the system of Tabbetzur, there is an Astrahus type citadel owned by The Ivana Trading Federation. Verge Of Collapse are also present on the kill which should also be considered. You can see on the loss mail though that planet 5 is mentioned. So being the diligent investigators that we are here at INN we went and had a look. Only having 1 moon at planet 5 made this a simple task. As is common there is a Player Owned Structure (POS) and the one on this particular moon is owned by Rate My Ticks. Now if this sounds familiar then it should. RMT is the rental wing of PL/NC. So the mystery seems to thicken.

Although INN has tried to get in touch with Shnookumms they could not be reached at this time. If we are able to we will of course update this article to ensure that we maintain our highest standards of accuracy. There is little conclusive information to be gained at the time of writing from either zkillboard or from /r/eve on Reddit.

To add insult to injury Shnookumms did not drop corp in order to preserve the killboard of NC. It is likely that there will be punishment dished out, likely in denial of hot pockets for at least a week or two. One can only speculate as to how an armour Titan would have fared and why Shnookumms seemingly failed to kill anything.