Into the Wild: Skyrim vs. Skyrim SE

On October 28, Bethesda released the highly anticipated Skyrim Special Edition. Many were excited about the prospect of diving into a world renewed, but wound up disappointed by the product Bethesda delivered. Frame rates were uneven, which didn’t justify the meager visual improvements. And the compressed audio was a mess.

After fumbling through the prologue, I stepped out into the vast remastered wilderness and sighed. This wasn’t what I expected. It isn’t what any of us expected.

I wanted to give up on Skyrim SE and even wrote a less-than-forgiving post about the game, the main gist of which was “stick with a modded version of Skyrim.” But that felt unfair. Without due diligence, who was I to say which of the versions was better? So, last night, I sat down and really compared the two games.

Here’s what I found…

First, Bethesda has patched the game. The flagging frames per second that I experienced on day one have been replaced by a silky smooth 60 fps. This allowed me to make my way through the SE game world and pay attention to the landscape. Things did look better, but there were some caveats.

Like any Bethesda game, there are bugs. One prominent bug had to do with horses. They bounce as you ride them now and feel as if they’re in danger of falling through the world at any moment. This feeling is enhanced when the horse crosses something like a stone or a fallen log. The horse seems to dip for a moment, as if considering whether to commit to a game breaking plummet into the gray abyss below.

But besides that, everything seemed mostly fine.

So, feeling good about my decision, I went in search of screen shots…

All screenshots were taken on My Rig. Skryim was outfitted with a handful of mods, while Skyrim SE was running at specs that the game recommended (high).

Each shot was taken from a fast travel point, so that I could get the most comparable screens possible. Besides that, I tried to line up the time (give or take a few minutes) and weather, but sometimes this proved difficult. Bethesda may have changed the default weather in certain locations and I plan on doing some additional research to confirm this.

Finally, for each set of photos below, the modded version of Skryim will be on top and Skyrim SE will be on the bottom. 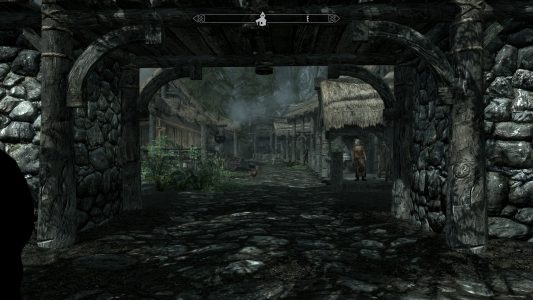 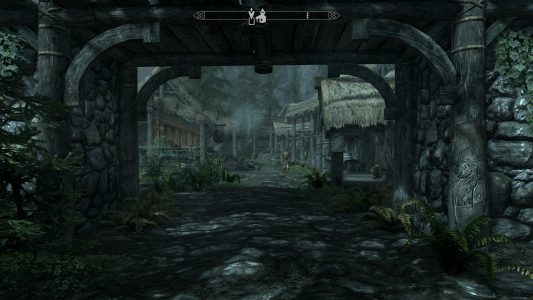 Right off the bat, I noticed three differences between the two games. The first is that Skyrim SE has more color. Skyrim was always kind of drab, but the SE version is lighter. Honestly, it reminds me of Oblivion and how colorful that game was (though the new SE coloring isn’t nearly as pastel). Second, the SE textures are a bit better. Skyrim, with the high res texture packs released by Bethesda, is close, but the SE textures are smoother and the stones on the walls seem to have better definition. Finally, foliage in Skyrim SE seems to be generally more abundant. 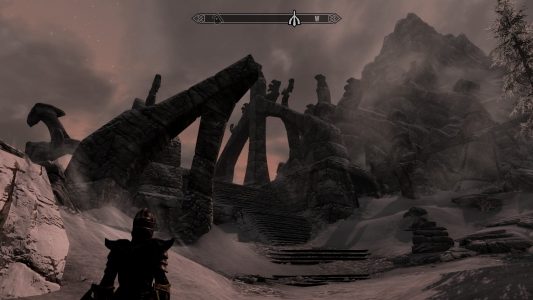 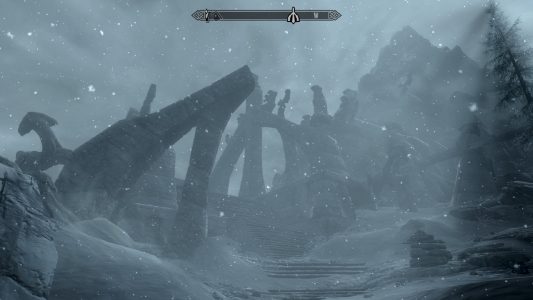 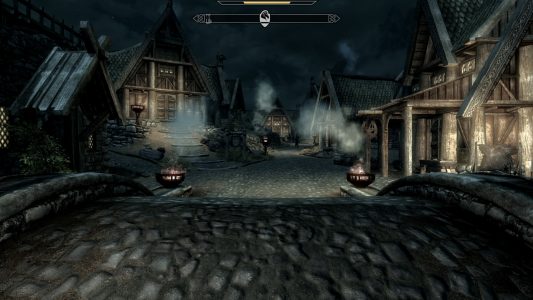 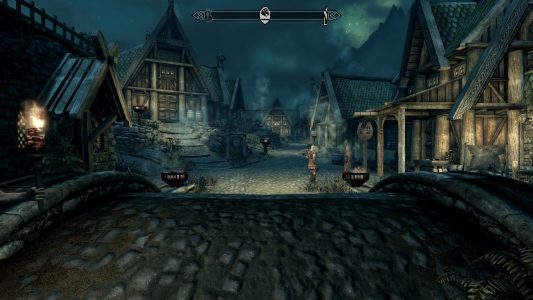 In this case, I feel like Skyrim SE falls a little short. The lighter coloring and soft light makes Whiterun seem a little too bright at night. The modded version of Skyrim is darker, which makes the shadows more pronounced. It feels like nighttime. And it feels more atmospheric. Besides that, the textures look remarkably similar. 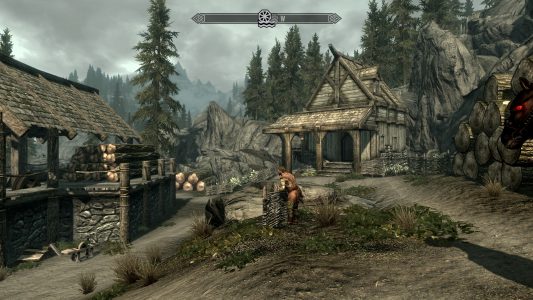 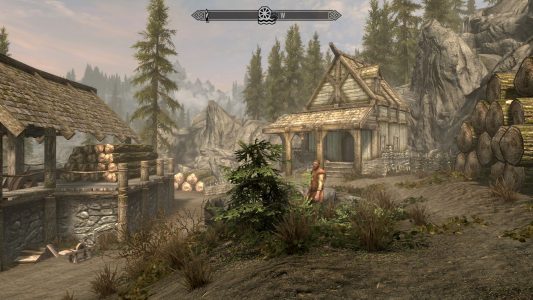 Here, the same color and foliage differences first noticed in Riverwood are evident. I do have to say, however, that the light haze over everything in Skyrim SE seems to impede texture quality somewhat. But lighting is better and shadows seem to be softer, with more grading. This one is really hard to call. In most cases, I bet it would come down to personal preference.

After the sawmill was Ivarstead, 2:56 pm: 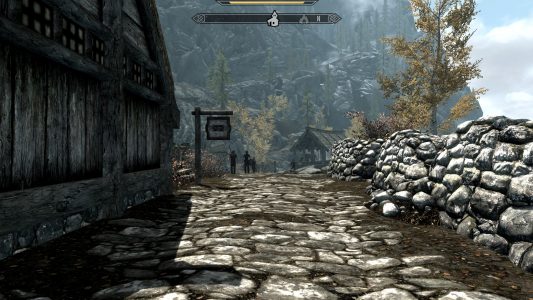 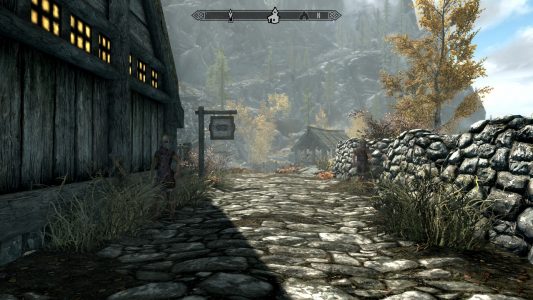 Again, color and foliage plays a large factor in the differences between the two games. There are a few other things to notice, however. In Skyrim SE, the wood grain seems to have a bit less detail than in the Skyrim shot, but that’s made up for with the shadowing on the stone wall to the right. The textures seem close, but the superior shadows give the wall a much more dynamic (and three-dimensional) look. Further, the draw distance in Skyrim SE is noticeably better. Items are rendered further away, but the slight haze over everything in the distance blurs the textures. Still, longer draw distances are always a plus.

I would like to note that the journey to Ivarstead was possibly more interesting than the screen shots taken there. In Skyrim SE, I was forced to steal a horse to shorten the trip. The ride was made at night and I was able to spend a few minutes looking at the new lighting effects. The haze that I’ve mentioned seems to be a symptom of the new lighting. As I rode north towards Ivarstead, a soft ethereal light blanketed everything in a fuzzy glow. It clearly painted a division between open air and shadows (the effect was pretty cool). Yet the glow was remarkably distracting. I haven’t actually ran through the wilderness enough to know how prevalent it is, but I’m willing to bet that the effect will be present more often than not (since it seems to be the source of the “god rays” that Bethesda seems so proud of).

After Ivarstead, I returned to The Guardian Stones and the lake behind it, 4:41 pm:

Originally, these photos were an afterthought, so didn’t match the weather, but I like these comparisons anyway. 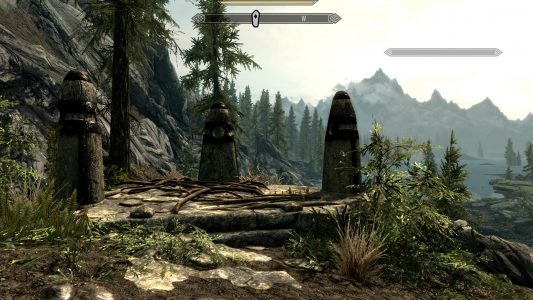 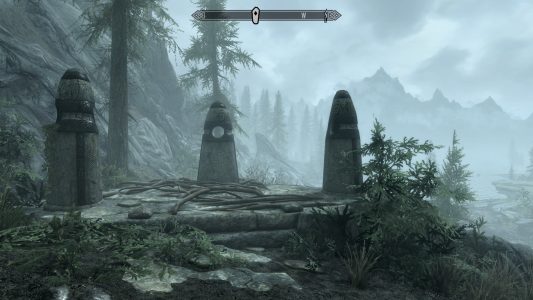 In this set of photos, despite the fog, the textures in Skyrim SE look remarkably smooth. I don’t know if it is because of the softer light or the fog, but Skyrim SE really shines in this photo. And it’s the first time that I can truly say that the SE version looks better than its predecessor. Perhaps personal preference or atmosphere has colored the decision, but I feel like, given the choice, others would agree. 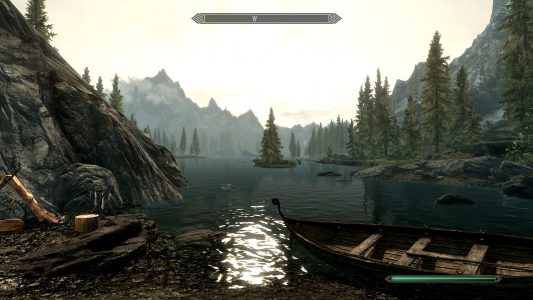 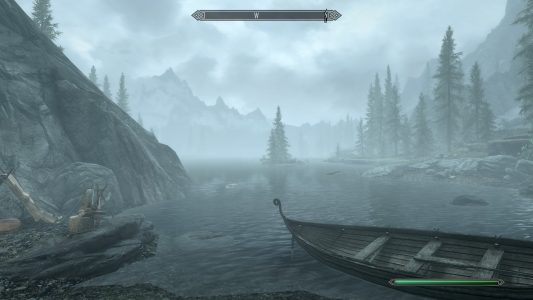 Again, fog blankets the Skyrim SE photo, but the game looks better. The boat textures in the foreground are remarkably smooth, yet detailed. And look at the water. The way the waves reflect the soft light is more realistic and the reflections on the surface are soft and fuzzy like I’d expect them to be (it looks even better when light is shining directly on it). Finally, there is more detail in the clouds – one change in SE I’m a huge fan of.

And now, one last comparison: 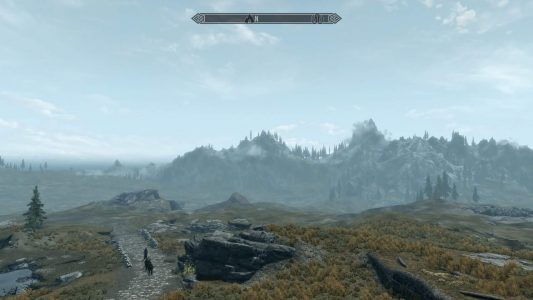 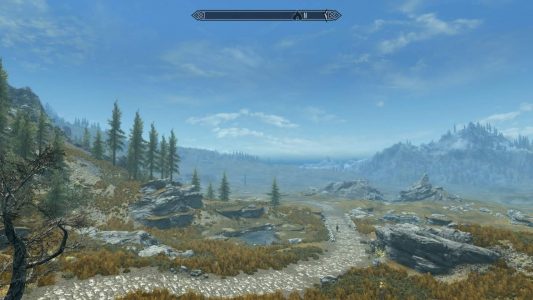 By now, it should be fairly easy to tell the difference between the two games. The difference in draw distance is plain. And the quality of the rocks in the SE version of the game are better. As is the small pool of water in each photo. And, again, the sky in Skyrim SE looks far more natural (the bit of lensing I just noticed near the horizon definitely helps).

Considering the patches Bethesda has employed and the time I spent wandering around both games last night, I have to say that my original assessment of Skyrim SE was incorrect. While the two games are close, the Special Edition has the edge. Draw distances are better, foliage is thicker, and colors are richer. Lighting is better (despite the ubiquitous haziness employed for “god rays”), shadows are softer, and textures are smoother. And let’s not forget about the water or the sky.

But is it worth $59.99? For a console gamer who has never had an opportunity to play Skyrim, I say it is.

But what about PC gamers? If you owned Skyrim and all of the expansions (Hearthstone, Dawnguard, and Dragonborne) before the Skyrim SE release, you got the SE version for free.

But what if you didn’t?

Well, I guess that depends on how many of the expansions you are missing. If only one, it might not be worth the $39.99 cost of admission. But if you’re missing all of them, it could be worth it (all together, they total $44.97 on steam).

There is one thing to consider, however.

A move from the original version of Skyrim to the Special Edition would mean access to far fewer mods. And while many of the mods currently available address bugs with the original game or enhance graphics (I’ve installed a few of those), there are other quality of life mods (skyui, for example) that won’t be available with the Special Edition of the game. Other mods like the Campfire mod or Frostfall also won’t be available. Not to mention a myriad of others.

I’m interested to see what kind of mods will be developed for the Special Edition of Skyrim, but I think it would be wishful thinking to assume that many of the current mods will be ported over. But there’s no real way to tell. Not yet, anyway. So, for now, I’d suggest assuming that Skyrim Special Edition will feature a far more modest mod list than its predecessor.

From a visual standpoint, mods for Skyrim SE are largely beside the point. The game already looks better than the original version. At least, it seems to based on the screens above.

Yet many, including myself, probably won’t make the decision of which game to play based solely on the way the game looks. While some will be thrilled that the game has 64-bit support and is more stable, others will decry the lack of lightsabers and unicorns and floating cities and unique companions and…you get the idea.

In the end, it comes down to personal preference.

After taking the time to sit down and play both games side by side, I’m still up in the air. The improvements to the Special Edition are definitely compelling, but I’m not sure that they’ll be enough to outweigh all of the missing content typically available through mods.

In the short-term? Maybe. In the long-term? Probably not.

So, after all that, it’s a toss-up. I still admit that my first impression of Skyrim SE was incorrect, but I’m not sure the scales have tipped enough for me to say that it’s the better choice. If circumstances change on the mod side of things, I’ll definitely switch over the SE permanently.

But for now, I’ll stick with the SE version of the game to see just how different it is (keep an eye out for a game play video in the near future). My guess is that, after the shiny newness of the Special Edition fades, an all too familiar game will remain. One I fell in love with 254 hours ago: