The Curious Case of Ironwulf’s Demise

Shortbus’ troubles started when Ironwulf, another commander in Darkness, and Sort Dragon parted ways. Ironwulf moved to Shortbus. The reasons for the move are not confirmed, but the split lead to the expulsion of Shortbus and some smaller alliances including Infensus and bloodline. They were forced to leave in short order.

Nearby, PL is stationed in Venal waiting out the Alliance Tournament and hitting targets of opportunity. Their staging system is within jumping range WLF-D3, the border system to Deklein (DKUK-G). The gate jump between regions is a bottleneck between Deklein and Venal since no ship can jump that far. This not uncommon around some regions in null-sec. The exiled alliances would certainly have to cross through that gate, and PL was watching it closely.

Yea saw all the stuff on reddit and figured they’d all be in the Keepstar in 2O9G so our fish crew (La Cámara De Negro) got with others in the NWO to figure out where they were going. Turns out gigX just blued them [shortbus] so we figured tribute. gigX is no friend of the NWO.

The NWO stands for New World Order, and it is the rumored to be a communication channel between leaders of various powerful alliances. They are self-appointed king-makers and king-slayers. The attack on Circle-of-Two (CO2), gigX’s alliance, was attributed to NWO, as was the effort to kill Project.Mayhem’s Keepstar a few days ago. Ron hints that this attack as another example of NWO.

The public debut of the term NWO was signaled by Elise Randolph’s tweet during the battle of SH1-6P.

Incidentally, PL and Darkness are both considered members of NWO, if it actually exists. 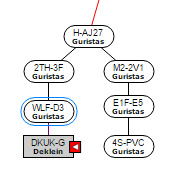 How could they be so stupid to
take the gate into Venal, I am sad to the people who followed whoever made that call. Hopefully they can make up for what they lost. 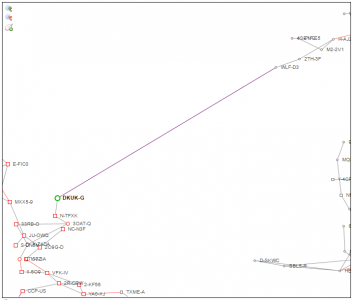 The Shortbus fleet was hit during a move op on the border of Deklein and Venal. It is suspected they were on their way to relocate the assets in NPC space or near CO2 territory, since the CO2 leader had recently blued them.

Among the casualties was the floating corpse of Ironwulf, drifting near the wreck of his Avatar-class titan. Conspiracy theorists will say his falling out with Sort Dragon cost him his titan, that NWO is real, and that Sort tipped off PL through the channel. The reality might be as simple as a public spat gave free intel to a nearby fishing crew.

I wouldn’t say it was their only way out. It was the only way out that was in direct range of us though, so I thank them for that decision. 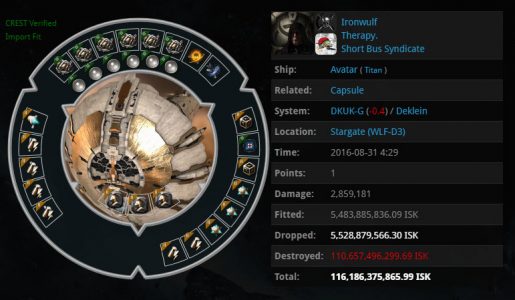 Across the map, in Delve, Mittani is smiling at the cracks that have formed among the groups that invaded the north. The prediction that all the alliances would eventually be subject to the whims of PL and Northern Coalition are coming true. From Mittani’s perspective, ducking an unwinnable fight left a violence vacuum that is being filled with whoever falls out of favor. In this case it was a lone Ironwulf.

Another perspective is Mittani so angered everyone in New Eden that they set aside the natural order of things to exact revenge on his empire. Now null-sec has returned to what it should always have been, and this massacre was just another target of opportunity for the Black Chamber.

update: for clarity, an additional image of the map was put in to show the long distance gate jump between regions, and the test that originallly read “Their staging system is within jumping range of only one system in Deklein – DKUK-G. That border system is a bottleneck ” was altered.  Also, the reason for the split between Sort and Ironwulf is not confirmed, so it was changed.