Welcome back to another edition of The Drafting Table. This time we take a look at the oldest of the Society of Conscious Thought ships, the Gnosis.

The Gnosis has always struck me as an interesting ship, so when I checked the market and saw how cheap they were getting in 1DQ, I figured it was as good a time as any to try it out. It also represents a very versatile platform, and that was something I looked forward to exploring. Given the hull’s unique properties, I chose to go a fun rout and give a pickone bot a say in what I fit. Can a bot out-fit Robby? The answer is likely yes, but let’s find out.

The Gnosis is one of four ships that belong to the Society of Conscious Thought, one of the NPC factions. This faction has strange and extensive ties to the Jove, and as such their ships are influenced by that technological relationship. The SoCT ships are also unique in the EVE universe in that they are typically only handed out as part of events or packages and do not have an in-universe source like almost all other ships. The SoCT ships also have only one required skill, Spaceship Command I, which mean any character can fly them. This makes these hulls some new player’s first exposure to bigger ships.

The Gnosis gets an interesting set of Role Bonuses. First is a 25% bonus to damage for all Heavy Missile, Heavy Assault Missile, and Medium turrets of all kinds. Second is a 50% bonus to Drone damage and hitpoints. The third is a 37.5% bonus to all Scanner Probe strength. Last is a 50% bonus to Command Burst AoE range with the ability to mount one Command Burst. Like the other SoCT ships and the CONCORD ships, the Gnosis also gets a flat base resist profile. Unlike racial ships, which have holes and peaks in their resist profiles, all the resists are the same. This eliminates the need to plug a dedicated hole, at the expense of not being able to abuse a naturally strong resist. 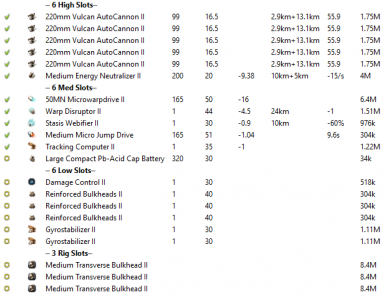 High Slots (6, 5 Turret Hardpoints, 5 Launcher Hardpoints): I chose to give the bot the pick of the various gun turrets for this fit, as I have some missile platforms in the pipeline. It chose 220mm Autocannons. I fit five 220mm Vulcan AutoCannon II to start the fit off. The utility high houses a Medium Energy Neutralizer II, as cap warfare is always nice to have.

Mid Slots (6): The bot had already handed my tank type to me, so it’s influence over the mid slots was whether I should Kite or Brawl. It chose Kite, so I started the mid slots off with a 50MN MWD II and a Warp Disruptor II. This gave me a combination of speed and point range to try and make kiting happen. I also added a Tracking Computer II to help give the AutoCannon more reach. A Stasis Webifier II took the fourth slot, to help control any small ships that might try and duck under my guns. The fifth slot was filled with an MJD, which provided me with additional maneuverability options. The last slot took a Large Compact Pb-Acid Cap Battery, which gave me the ability to run all my active mods for almost 4 minutes without thinking about cap.

Low Slots (6): When I asked the bot for my tank, it gave me a really fun answer, Buffer Hull. Buffer hull tanks are quite easy to construct, consisting of a Damage Control for resists and Reinforced Bulkheads for additional hitpoints. I used four of the low slots to form my tank, a Damage Control II and three Reinforced Bulkhead IIs. The remaining two slots were filled by Gyrostabalizer IIs, to increase the damage output of my AutoCannons.

Rig Slots (3): I used the rig slots to improve my raw hitpoints more with three Medium Transverse Bulkhead IIs. While more expensive than their Tech I counterparts, the increase is cost is more than made up for by the increase in hitpoints they provide.

Drones (75m3, 50 mbits bandwidth): I focused my drone loadout on helping me fight smaller ships. I chose two flights of light drones, five Warrior IIs for chasing fast targets and five Hobgoblin IIs for a higher damage option. I rounded out the bay with five EC-300s to give me a fighting chance against a single larger target or tackle ship with the possibility of a clutch jam.

Bling and Implants: I would not recommend throwing any bling or dedicated implants at this fit. What is above already ballooned very high relative to the cost of the hull. Going much higher than that is not really worth it, and the additional funds should be redirected to choosing a hull more bonused to the role you are trying to fill.

I mostly just wanted to have some fun and see what would happen with this fit. Once I purchased it, I set out on a little roam. Eventually, I ran into a Darwinism Proteus. Thinking the end was near, I jumped through the gate we were both sitting on and got ready to run. He came through and tackled me, so the fight was on. I had one advantage: since we were in lowsec, he now had gate guns shooting at him. I put out my EC-300s and sicked them on the Prot, while my guns pounded away and I did my best kiting impression while he scrammed me. I waited for his backup to arrive, but none came. Eventually, the Prot exploded, leaving me so shocked that I forgot to loot the wreck. While I can’t say what happened on his end, clearly I had gotten lucky. His corp mates got revenge several hours later.

I’m not sure I would fly this fit again, but the hull itself was enjoyable. Trying to make a fit to kite with a short-range weapon was interesting, but didn’t really work. The Gnosis also has a low base speed, so it’s never going to be a speedster. Sticking with the current weapons systems, the mid slots could be modified to make this into a brawling fit. 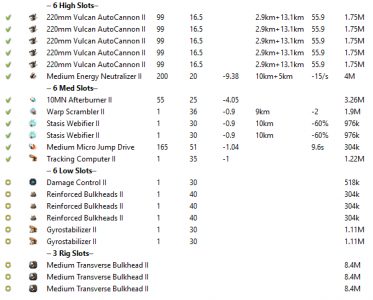 Overall, I think the strength of the Gnosis and the other SoCT ships is the ability for any player to jump into them. It gives people an opportunity to try out larger ships or new weapon systems and overall I think they are a good addition to the game. Let’s hope CCP keeps seeding them so they remain an affordable option for new and new at heart players for a long time to come.

In the battle of Robby vs the pickone bot, I seem to have come out slightly on top, tho the fit it came up with did net me a kill that was way out of my league. What are your thoughts on the ideal fit for the Gnosis? Is there something better as an introductory fit for new players? Let me know in the comments. Until next time.