Welcome back to The Drafting Table. Since its been a little while, it was time to take out something big. The Phoenix takes center stage.

I was inspired to try this concept out by Lasker Emanuel, who put out a couple of videos of his solo HAW Dread shenanigans. While he is clearly better at this than I can ever hope to be, its still a great inspiration to watch his videos. His renditions of the Phoenix against an Imperium fleet and a double Ancillary Shield Booster version taken against Pandemic Horde are both fantastic, as is the Revelation. When I ended up with an extra Phoenix hull, I knew it was what I wanted to try. Lasker provides some excellent examples of what is possible with a large budget, and I can only hope to be that wealthy someday. Rather than go for the full bling of Lasker’s fits I decided to go in the opposite direction. Can you make a “budget” solo HAW dread?

The Phoenix is the Caldari State’s Dreadnaught. Much like many of her subcap relatives, she is a missile boat meant to have a robust shield tank. For each level of the Caldari Dreadnought skill possessed by the capsuleer piloting it, the Phoenix gets a 4% bonus it all shield resistances, 5% bonus to XL Cruise, XL Torpedo, and Torpedo damage, and a 10% reduction in missile launcher reload time. 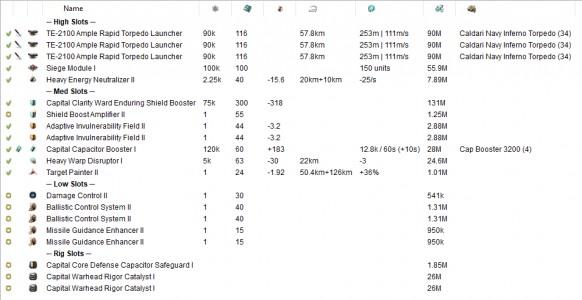 High Slots(5, Three Launcher Hardpoints): Like all Dreadnoughts, the Phoenix is able to mount three weapons, and has two remaining high slots. For my fit, I picked the TE-2100 Ampel Rapid Torpedo Launcher. The equivalent to the High Angle guns used as anti subcap weapons, these provide quite the punch to deal with anything battleship or smaller. The first of the remaining high slots went to the Siege Module. Unique to Dreadnoughts, this provides a large boost to damage and self-repair at the cost of any and all mobility. It runs for five minutes and cannot be interrupted. I’m using the Tech 1 version due to skill limitations, and a Tech 2 should be used if possible. The last high slot is occupied by a Heavy Energy Neutralizer II. This provides some cap warfare capabilities against subcaps which a Capital Energy Neutralizer would not provide.

Mid Slots (7): With seven mid slots, the Phoenix can boast a mean shield tank. The backbone of this tank is a Capital Clarity Ward Enduring Shield Booster. Helping the shield booster is a Shield Boost Amplifier II, which increases the amount of shield HP restored per cycle. Two Adaptive Invulnerability Field IIs form the resistance profile. Combined with the hull resist bonus, this gets even the lowest resist to 62%. Next comes a Heavy Warp Disruptor I. I picked the Heavy variant because I wanted some insurance against any Warp Core Stabilizer shenanigans, and a scrambler’s range is too short. To help with application, I chose to use a Target Painter II. This increases the sig radius of the target, which helps missiles apply better. Last, all of these cap-hungry modules are fueled by a Capital Capacitor Booster I.

Low Slots (5): The low slots begin with the most ubiquitous mod, the Damage Control II. Rounding out the slots are a pair each of Ballistic Control System IIs and Missile Guidance Enhancer IIs. Combined they help provide more raw damage and help make sure that damage actually applies to its target.

Rig Slots (3): The first rig slot goes to extending the life of the capacitor. By far the most hungry mod is the shield booster. The Core Defence Capacitor Safeguard I drops the activation cost of the shield booster by 10%, which helps keep the lights on longer. The remaining two slots are occupied by Warhead Rigor Catalyst Is. These provide a reduction in the Explosion Radius of the torpedos, which helps application across more scenarios than increasing the Explosion Velocity via Flair Catalysts would.

Bling: As this is an attempt at a “budget fit”, I’m going to explain the locations where I deviated from cheap Tech 1 mods. First is the weapons system. I chose this variant due to a reasonable cost and a good benefit in the additional ammo capacity. The improved ammo storage means I get more time between reloading cycles and my experience with RHMLs on the Typhoon and Scorpion Navy Issue leads me to believe this is a good thing. The second upgrade was the shield booster. I selected this for its bonus to capacitor consumption via longer cycle times. This will help take stress off the capacitor and allow the tank to run for a longer period.

Implants: Unless you have Missile Launcher Rigging V, this fit requires an EE-60X implant. What one you need is dependent on your level of Missile Launcher Rigging. If you want to go harder on the pod, grab the following in whatever flavor your budget allows. Slot 7 SA-70X, Slot 8 GP-80X, Slot 9 TN-90X, Slot 10 RL-100X. When I took the ship out, I also added the following drugs. Antipharmakon Toxot, Synth Blue Pill Booster, DB7 Dose III.

Use Case and Testing

My goal with this ship was to basically take as many ships with me as I could. I knew I wouldn’t make it out so that seemed like a nice target. I ended up in GE-8JV and Brave decided to give me a fight. By that I mean they dropped three anti-cap dreads dropped on my head, and I died unable to kill anything in return. Most of their ships sat outside of tackle range and just warped off when targeted. The smaller ones that got close were just able to burn away before my missiles could kill them. The silver lining is that a PL gang I ran into would not fight me, so it pleases me to say that Brave has bigger balls than PL.

Honestly, I would not do this again and don’t recommend it. It took quite a long time to get where I ended up and getting something that felt valuable would really require not getting anti-cap dreads dropped on your head. It might be fun to do if you have a lot more resources than I do, but I can see lots of frustrating outings such as this one before getting a good fight in. To answer my initial question, you can make a budget HAW dread, but a trio of anti-capital dreadnoughts cut things short regardless of how blingy you go.

Overall, a fun to plan but disappointing outing this time. Got a ship you want to see me fail spectacularly in next? Let me know in the comments.