SUICIDE IS NOT PAINLESS: #BROADCAST4REPS

Many of us play games like Eve Online to relieve stress and boredom as well as awesome fun and pew pew. We socialise and hang out together; our corpies and Alliance mates are genuinely real friends, out of game as well as in game. We are all, however, human. Events can happen to us that can overwhelm us so much we simply can no longer cope. It could be bereavement, relationship breakdown, a loss of our home or job. It could be debt, a diagnosis, an injury or a combination of any or even all. These are the times we can be in real trouble in real life, but may find it hard to talk about our situation or how we feel, even to people close to us, so having a place where we can talk safely in a familiar environment is incredibly important. One member of the Eve Online community has found a way for players to reach out for help and support.

#broadcast4reps has actually been around for a little while now and has already garnered the support of players and CCP alike; however the video released on the 25th October has caused an outpouring of support from all over New Eden. The chap behind it all is Coffee Rocks who’s website thecoffeerocks.com has loads of helpful information and links, there is also a thread on the Eve-O forums as well. So what exactly is it all about? From his website:

”Broadcast For Reps was created after players recognized a need for their fellow gamers to reach one to another when real life gets tough. Gaming communities provide you with a unique style of social interaction that you may not have in normal life. Here in EVE Online, we meet people from every walk of life from every corner of the world, and yet, we speak to each other with as much anonymity as we choose. Because of that, it can sometimes be easier to open up to your online community than those around you in real life.

Broadcast For Reps is just for that purpose. When you reach out here, you are reaching out to fellow volunteers in your EVE family in a safe setting. Whether you just need to rant about a bad day, or you’re thinking of hurting yourself, we’re here to listen to you. ” 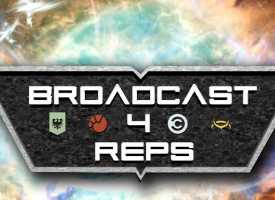 There are in-game channels: Broadcast4reps and Broadcast for Reps as well as Twitter and FB #broadcast4reps. There are also many other ways of accessing help including Slack, reddit etc. All of these channels are staffed by volunteers. There may very well be some trained professionals on board, but the thing here is to listen and to guide someone appropriately. TMC was very impressed to see that when the video was picked up by social media, numbers in the in game channel swelled from half a dozen to nearly 50 in well under an hour. Many many people who have or have in the past, had serious mental health issues have had the confidence to share thier stories, with many reps being given and recieved. If on FB or Twitter, you put the #broadcast4reps on your post, then people know that you need help. Its simple, saves confusion and allows admins to moderate more easily.

One reason why we can often find it so hard to talk about our problems is because of fear. The fear of being stigmatised, judged, trolled or bullied. Fear of rejection, particularly if a problem has continued or progressed, because we ‘don’t want to be a bother or a burden’, or ‘bore people’. This can in fact lead to us to withdrawing from the very people that we most want to reach out to.

Another reason is shame. We can feel ashamed because ‘it must be my own fault somehow’, particularly if someone’s situation has been affected by abuse or addiction, which often go hand in hand. We get told ‘Just snap out of it! Why can’t you just be normal?’, or worse, ‘You’re just weak and lazy’. The problem is, you simply can’t! The Black Dog saps all the strength you have, just to keep breathing, let alone get out of bed, eat  or sleep. Personal hygiene often goes out the same window you want to throw yourself out of. It settles around you like a damp, cold shroud. This can lead to a person feeling utterly isolated, worthless and powerless, especially if no one takes you seriously.

Illness, depression and disability can also have devastating effects on not just a person’s mental health. It affects EVERYTHING! Family life and your ability to work begin to suffer, as does your confidence, which then throws your self-esteem down the toilet. Your sex drive disappears along with your social life. You lose the ability to feel and relate to others, even your own children can feel like strangers.You can get angry and lash out when anyone tries to tell you that you didn’t take out the trash because because you were so tired and drained that you forgot. You punish yourself repeatedly and can take out that frustration on everyone else; because you feel you are a failure and are forever on the defensive. Naturally this affects the people who love you, but you already know this, which makes you feel even worse.

One example I think most of us Eve players have very often encountered could be retired or serving soldiers and other people from similar disciplines who have, or have had problems which can be crippling in a very real way. Not just physical trauma, which is bad enough in itself, but trying to adjust mentally to a possibly life changing injury. Many other people have ‘invisible’ injuries or illnesses which have much the same effect, but you would never know they were ill just by looking at them; in fact, people very often hide it for previously stated reasons. I’m talking PTSD, anxiety and all the fallout that can accompany it.

What about those with the fun times of enduring ADHD/OCD/Aspergers/chronic pain disorders like fibromyalgia ect? Let’s not of course forget anyone struggling with cancer or anything else that makes you wonder if its worth waking up the next day.  People will do ANYTHING to escape chronic pain. These are the people who so often fall through the cracks. One day they seem fine, the next? They are gone. We had no idea, where were the signs? There are no words to describe how it feels when we lose someone we love to themselves. Suicide is as painful for those of us left behind as it for the person who can’t bear the pain they have endured for too long and are so often unable to express.

We all have our shields and social ‘cloaks’, but when our personal tank starts to cycle into the red, or even fail altogether, we need those reps! Sometimes it takes just a hug, sometimes just someone who listens, someone who can help us take those first baby steps towards reclaiming our lives. Often we need you to give us the information, so we can begin to empower ourselves and find the help and direction we so badly need. You can never wave a magic wand over anyone, but you can hold out your hand, guide that person and show them that whatever happens, they are NOT alone! If just a little of our time each week is spent being open to talking to someone who could be struggling and confused, someone whose life we can save just by listening and being there? Is that not worth it?

People generally don’t come to you directly threatening suicide; it quite often comes across as something seemingly trivial, a joke even. They want to feel a connection to another human being and go from there, because they often feel awkward and embarassed. It may well have taken every ounce of energy just to find the courage to make that first step. So joke back and make a friend yourself! They NEED a friend, so be that friend. If each and any of us can each save just ONE person! Is that not worth it?

TMC asked Coffee Rocks for a few words about the reaction to his video:

“I went into this project wanting to drive home a message, so of course I aimed to generate an emotional response from the viewer. What I didn’t think to prepare myself for was just how the playerbase would respond back to me. By the end of the day Sunday my Twitter and the subreddit had completely exploded, and people were walking up to me at Vegas crying and hugging me. They were telling me their stories of loss, of their personal battles with mental illness, PTSD, and addiction. They told me how proud they were of me, the other video participants, and of CCP. I don’t care how thick your think your armor is or how tough you think you are; after all that immense and humbling positive response, I was openly crying by the end of the night. We truly do have the best community in gaming.”