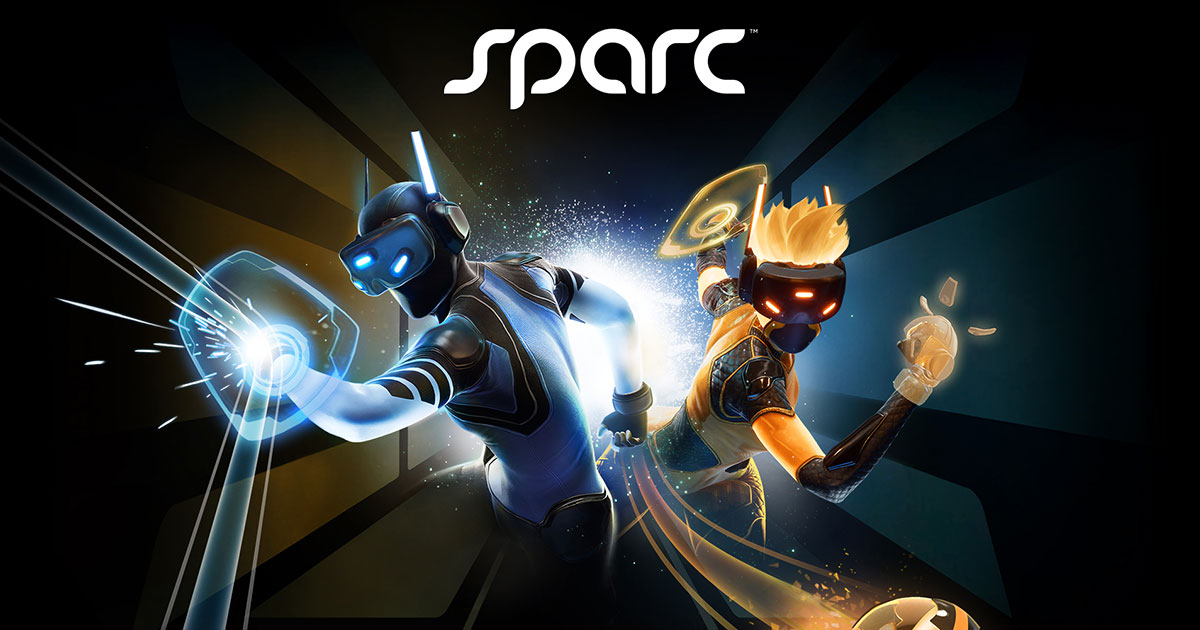 Sparc is a self-described virtual sport, or ‘vSport’, where players compete in full-body virtual reality gameplay. The premise is simple: pick up a ball, and try to hit the player on the other side of the court while dodging or deflecting their ball. Sparc released for PlayStation VR on August 29, and I had an opportunity to play it at Eve Vegas. With the recent layoffs at CCP, the anticipated PC port looked uncertain. However, without any fanfare, CCP released Sparc for PC on November 16. The PC version is available on Steam and the Oculus store for $20. With the PC release, Sparc is now available on all major virtual reality platforms, including Windows Mixed Reality devices.

Sparc is a cross between dodgeball and racquetball with a sci-fi flair. You compete against another player by hurling balls of plasma at each other. Behind each player is a ring creating a strike zone. Your primary goal is to hit the other player and score a point. Putting the ball through the strike zone awards a strike, which increases the size and speed of your ball. In beginner levels, each player has a fist guard that allows you to punch the incoming ball safely. If you are holding your ball you can also create a plasma shield to deflect the ball.

The arena is a long narrow enclosed court with plenty of surfaces to bounce the ball off. Success in Sparc is a matter of bouncing your ball at odd, difficult-to-block angles while timing your shots so that your opponent cannot block them with a shield. It is possible to get two shots in while the opponent’s ball travels back with proper blocking. A deflected ball can also score points, so another way to double up is to send their ball back with your ball right behind it.

There are three match modes: beginner, advanced, and experimental. In the beginner mode you play a three-minute timed match with sudden death overtime. The beginner mode gives you fist guards that allow you to deflect the ball. The Advanced mode is a race to hit three points, and the fist guard is disabled, leaving only the plasma shield. The experimental mode is place where CCP experiments with new ideas like different arena shapes.

Sparc supports cross-platform matchmaking, which bolsters the player pool and ensures you always have someone to play with. I experienced very short queue times and encountered players on both Rift and PSVR systems. The game lobbies hold up to four people—two in match and two spectating. Much like queuing for a pool table at a bar, the spectators line up to take on the winner of the current match. All players in the lobby have voice comms, and the players in match can see the spectators as giants peering into the arena. The game renders the spectator’s hand gestures and movements so you can see them while in a match. This creates a wonderful social dynamic with people cheering and talking smack.

When you first start Sparc you go through a short tutorial to learn to the controls. Afterwards, you have six challenge modes available—beginner and advanced modes focusing on throwing, deflecting, or both at the same time. You should spend time in these modes until you can hit the targets quickly and repeatedly. Moving into matchmaking too soon will result in getting stomped by a PSVR player with three months more practice than you.

The PC used for testing is a i7-4770K with a GTX970 driving a HTC Vive. The game ran flawlessly on this machine. I encountered people in game who were using an Oculus Rift, all reporting smooth performance. As someone living in a rural area, without access to the best internet connection, I was concerned about lag. Thankfully, the netcode in the game appears to perform well, as I experienced very little of it while playing Sparc other than an occasional stutter in the ball movement.

The game play is fun and challenging. Whether or not Sparc is a sport may be up for debate, but my Fitbit did consider it exercise. In a 40-minute play session, I burned 200 calories and had a peak heart rate of 134 BPM. Dress for exercise before you play this game as it will make you sweat. Playing without pants is optional, but I recommend it.

The social dynamics in this game are very enjoyable. The always on voice comms and wacky three-point kinematics lead to humorous moments. The downtime while spectating a match is a perfect time to start up a conversation or do your best Marv Albert impression.

Overall, Sparc is a simple yet impressive game that is perfectly suited for competitive VR play. It has the potential to be an eSport (or vSport) although the recent downsizing at CCP may mean the game never realizes that potential. The social aspect of this game is great and it’s perfect to play with three friends (or three strangers). Sparc is the perfect title to introduce people to virtual reality, and I expect it to be a big hit when I bring my rig to parties. If you have a VR headset and want to play, come and join us on the Imperium News Discord.