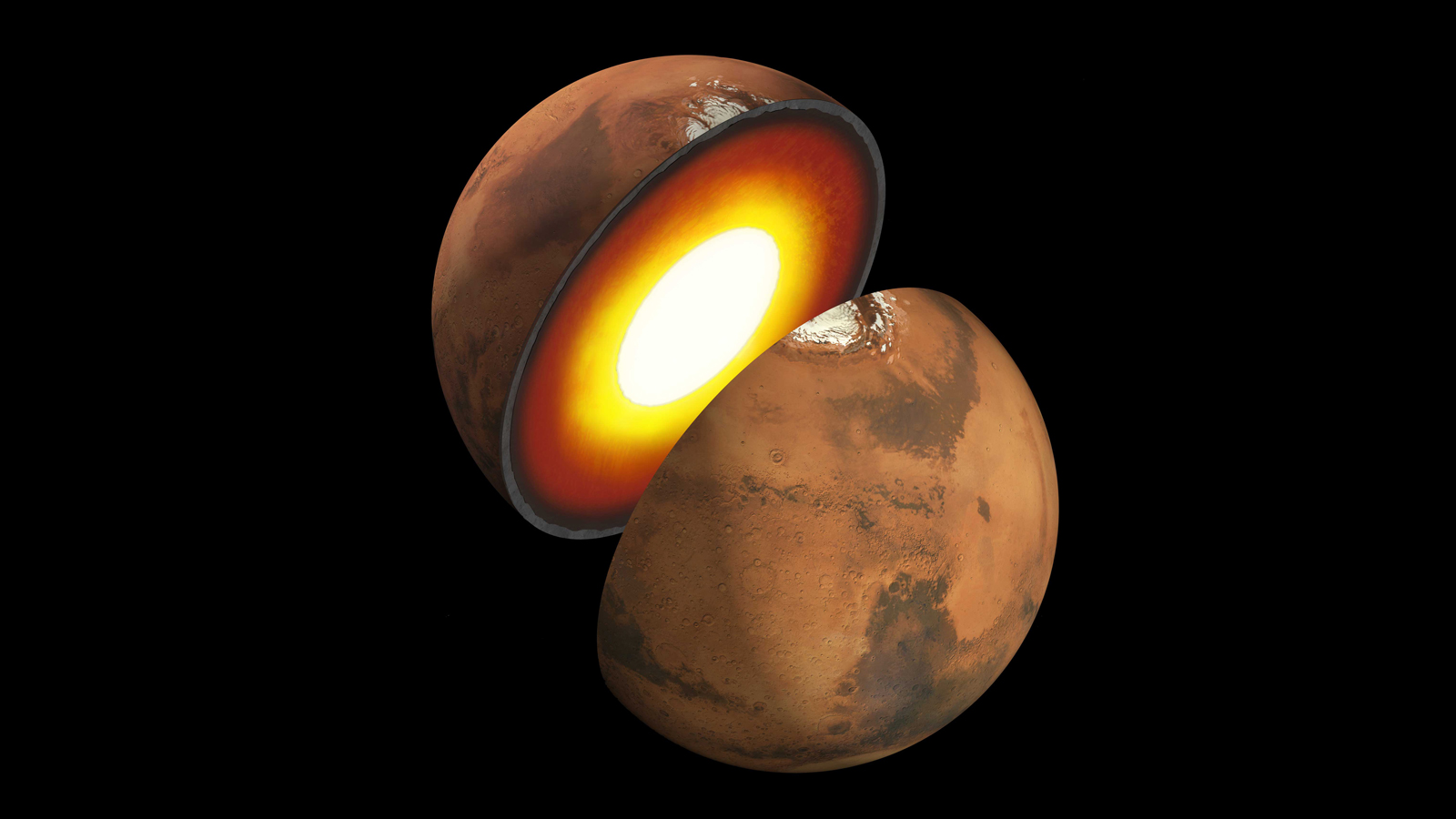 This time space fans, we have the Kepler replacement mission, Marsquakes, missing matter and a very distant star!

The newest exoplanet hunter is due to launch from Florida in a SpaceX Falcon 9. After a sixty day flight to its Earth orbit it will begin its initial mission of two years. TESS (Transiting Exoplanet Survey Satellite) as an instrument that has a huge field of vision—around 85% of our sky—and will be using transit photometry. This is the same method used by the soon-to-run-out-of-fuel Kepler telescope to look for worlds that may harbour life.

“One of the biggest questions in exoplanet exploration is: If an astronomer finds a planet in a star’s habitable zone, will it be interesting from a biologist’s point of view?” said George Ricker, TESS principal investigator at the Massachusetts Institute of Technology (MIT) Kavli Institute for Astrophysics and Space Research in Cambridge, which is leading the mission. “We expect TESS will discover a number of planets whose atmospheric compositions, which hold potential clues to the presence of life, could be precisely measured by future observers.”

“We learned from Kepler that there are more planets than stars in our sky, and now TESS will open our eyes to the variety of planets around some of the closest stars,” said Paul Hertz, Astrophysics Division director at NASA Headquarters. “TESS will cast a wider net than ever before for enigmatic worlds whose properties can be probed by NASA’s upcoming James Webb Space Telescope and other missions.”

TESS is looking at targets closer to Earth than Kepler did and will give the Webb Telescope targets to examine more closely, whenever NASA can get the thing safely into space! TESS will use spectroscopy to  find out as much information as to a planet’s size and composition to hopefully determine potential habitability.

TESS is opening a door for a whole new kind of study,” said Stephen Rinehart, TESS project scientist at NASA’s Goddard Space Flight Center in Greenbelt, Maryland, which manages the mission. “We’re going to be able study individual planets and start talking about the differences between planets. The targets TESS finds are going to be fantastic subjects for research for decades to come. It’s the beginning of a new era of exoplanet research. I don’t think we know everything TESS is going to accomplish, to me, the most exciting part of any mission is the unexpected result, the one that nobody saw coming.”

Sad as the demise of the wildly successful Kepler and K2 missions have been, the telescope has outperformed anything we could have imagined. As seems normal these days with NASA missions, Kepler has long outlasted its original mission by about 7 years. Back in 2013 a reaction wheel broke which meant it couldn’t hold its focus in one place, but a method employing the Sun’s pressure help keep it steady enough to continue. It has paved the way for these upcoming missions and will continue to provide exciting science until the end.

NEW MISSION TO SEEK OUT MARSQUAKES

As the Curiosity rover celebrates its 2000th day on the surface of the red planet, NASA is gearing up for a new mission to look beneath the surface of Mars which we’re sure will give us much needed data about what is going on in the planet’s interior. The InSight mission will use seismology to measure Marsquakes, in the same way we use it here on Earth employing geophysics. Quakes have a number of different waves that move differently depending on what they are moving through, for example an S-wave cannot move through liquids, hence how we know a liquid outer core and hence our intrinsic magnetic field.  Mars, as we know is much smaller than Earth and is far less geologically active. We do know however that it may well be volcanically active even today as we have found evidence of volcanic as recently as a few million years ago, so although we see no evidence of current tectonic activity, we’re pretty confident of picking up rumbling from under the surface.

“During formation, this ball of featureless rock metamorphosed into a diverse and fascinating planet, almost like caterpillar to a butterfly,” Mission leader Bruce Banerdt said. “We want to use seismology to learn why Mars formed the way it did, and how planets take shape in general.”

The instruments will get a snapshot of the interior. The more quakes, the more snapshots we get, thus building up a clearer picture. InSight will measure more than just Marsquakes. The Doppler shift from a radio signal on the lander can establish whether the planet’s core is still molten; a self-burrowing probe is designed to measure heat from the interior. Wind, pressure and temperature sensors will allow scientists to subtract vibrational “noise” caused by weather. Combining all this data will give us the most complete picture of Mars yet.

THE MYSTERIOUS CASE OF THE MISSING DARK MATTER

There was a time when we discovered that the Universe seemed to be missing most of the mass it needs to function within the framework of well tested physical principals, so we now have dark matter and dark energy, which we know is there, as it is measurable via gravity and only interacts with the Universe gravitationally as far as we are currently aware. So a new conundrum has arisen in the discovery of a galaxy, called unexitingly NGC 1052-DF2, that appears not to have any.

“We thought that every galaxy had dark matter and that dark matter is how a galaxy begins,” said Pieter van Dokkum of Yale University in New Haven, Connecticut, lead researcher of the Hubble observations. “This invisible, mysterious substance is the most dominant aspect of any galaxy. So finding a galaxy without it is unexpected. It challenges the standard ideas of how we think galaxies work, and it shows that dark matter is real: it has its own separate existence apart from other components of galaxies. This result also suggests that there may be more than one way to form a galaxy.”

You could argue that as this is an ultra diffuse galaxy, that that would be the reason why. However, no other galaxy of its type is missing dark matter.

“If there is any dark matter at all, it’s very little,” van Dokkum explained. “The stars in the galaxy can account for all the mass, and there doesn’t seem to be any room for dark matter. I spent an hour just staring at the Hubble image, it’s so rare, particularly these days after so many years of Hubble, that you get an image of something and you say, ‘I’ve never seen that before.’ This thing is astonishing: a gigantic blob that you can look through. It’s so sparse that you see all of the galaxies behind it. It is literally a see-through galaxy. It’s like you take a galaxy and you only have the stellar halo and globular clusters, and it somehow forgot to make everything else, there is no theory that predicted these types of galaxies. The galaxy is a complete mystery, as everything about it is strange. How you actually go about forming one of these things is completely unknown. Every galaxy we knew about before has dark matter, and they all fall in familiar categories like spiral or elliptical galaxies, but what would you get if there were no dark matter at all? Maybe this is what you would get.”

Naturally the hunt is on to find more galaxies like this oddity.

MOST DISTANT EVER STAR FOUND

Speaking of Hubble, the space telescope has been busy again. This time it has discovered a star 9 billion light years away, which is, as I hardly need tell you, a long way away in both time and space! It was found via gravitational lensing, which acts like magnifying glass. The star is an enourmous blue giant that abounded in the early Universe and generally blew up in a spectacular fashion, making heavier elements in the process. 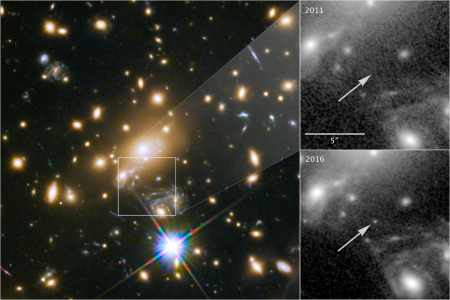 Icarus, whose official name is MACS J1149+2223 Lensed Star 1, is the farthest individual star ever seen. It is only visible because it is being magnified by the gravity of a massive galaxy cluster, located about 5 billion light-years from Earth. Called MACS J1149+2223, this cluster, shown at left, sits between Earth and the galaxy that contains the distant star. The panels at the right show the view in 2011, without Icarus visible, compared with the star’s brightening in 2016. Credits: NASA, ESA, and P. Kelly (University of Minnesota)

“This is the first time we’re seeing a magnified, individual star,” explained former University of California at Berkeley postdoc and study leader Patrick Kelly now of the University of Minnesota, Twin Cities. “You can see individual galaxies out there, but this star is at least 100 times farther away than the next individual star we can study, except for supernova explosions.”

Gravitational lensing ia wonderful quirk of nature that allows us to look much further away and futher back than we’ve ever been able to acheive before!

See you after Fanfest spacefans!