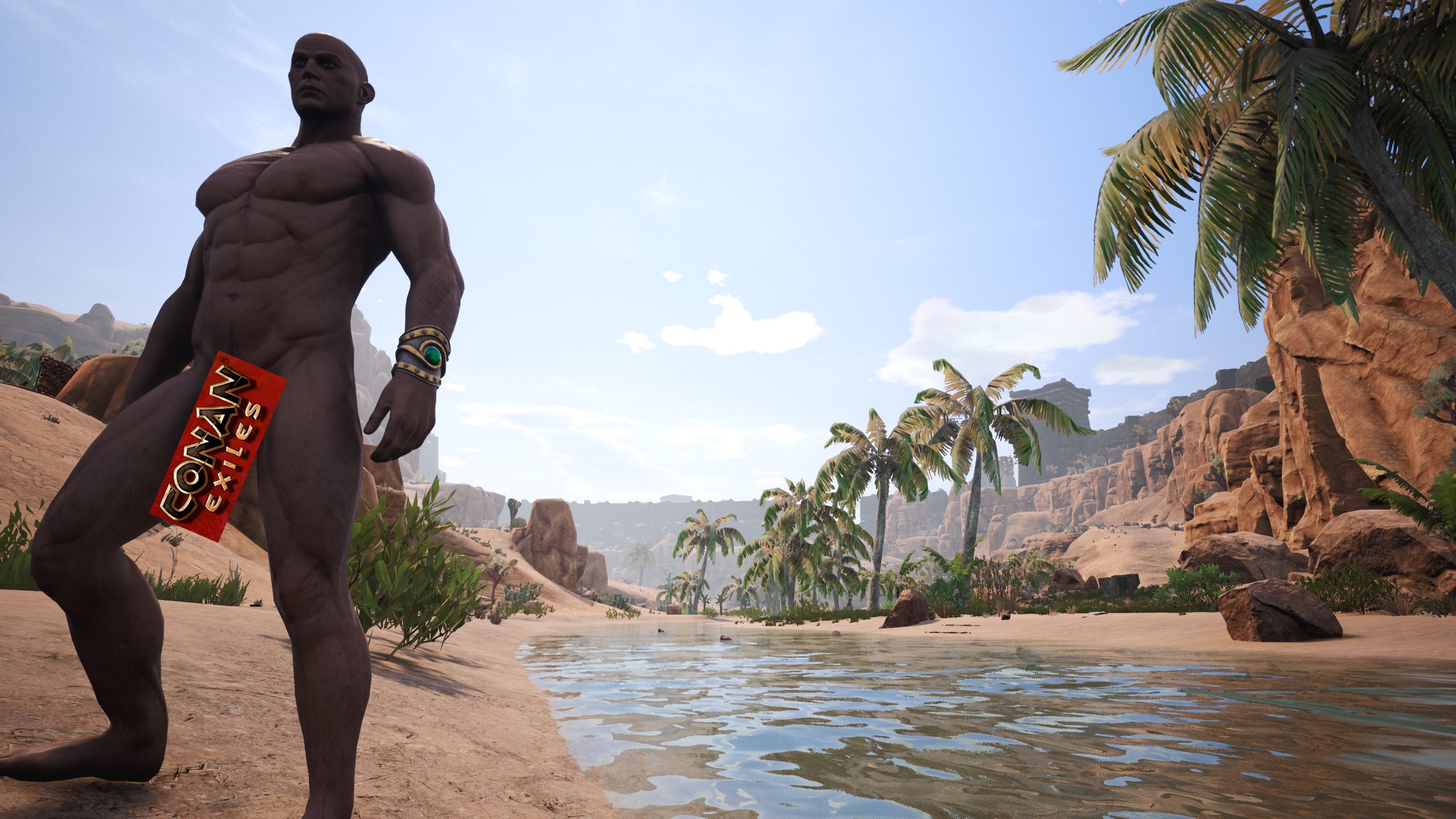 I’ve been exiled for heinous crimes, hung on a cross, and left to die. My life was forfeit until Conan saw fit to free me from my bonds, granting me access to the lands of exile. Here, I must learn to forge a new path and survive despite the odds that are stacked against me.

The first night is cold and I can hear things moving out in the dark. Being near the river gives me a modicum of hope. After all, having water to drink and berries to eat means I will survive, but that doesn’t mean whatever is making those terrible sounds won’t eat me before morning. 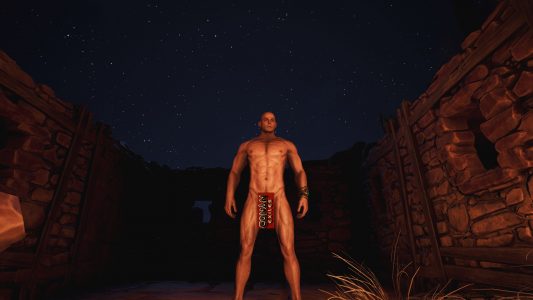 But I live to see another dawn.

Unfortunately, Conan Exiles isn’t anything that players haven’t seen before. Once the “new” has worn off, it’s basically a reskin of countless other survival games, but is most closely related to ARK: Survival Evolved. Both games play out with similar goals in mind – start from scratch to build a sustainable habitat within an extremely hostile world. And, if you’ve played ARK before, all of the systems that exist in Conan will be intimately familiar.

If not, here’s how it works: survivors are turned loose in hostile play area, tasked with the sole purpose of surviving. Performing any action will gain the player experience, which can be spent on attributes that will make the character more powerful over time. They also gain points that can be used to unlock crafting recipes. These points, and the corresponding recipes, are level-locked, meaning that for players to progress past a certain point, they will have to perform enough actions to gain enough experience to reach the required level to unlock a recipe.

This might sound tedious because, to a degree, it is.

What is Best in Life? 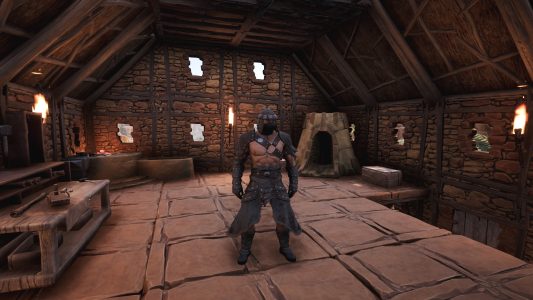 While there is a wide range of things to do in Conan Exiles, everything tends to support one thing in particular: combat. Crafting, building, and training thralls are all interesting endeavors, but eventually point the player in the most violent direction possible. And, depending on the game mode the player is participating in, the level of violence ranges drastically.

In solo mode, the player is pitted against the game-world. While not wholly enjoyable, it gives one the feeling of immense challenge. One against the elements (and all of the crazy, hostile creatures that fill the massive world).

PvE is a bit better, allowing players to band together to take on what the world holds in store. Honestly, this mode felt the most interesting to play. Finding a well-populated PvE server is fairly easy, but it’s rare to actually see anyone else on the server (aside from a constant stream of conversation in chat). And even when you do, the other player typically runs by without bothering to stop and say “hi”. It’s nice to see other people occasionally, but it barely feels like anyone else is present.

Finally, there’s PvP: the most violent option of them all. These servers are typically full to the brim, very active, and extremely dangerous. Players without a good amount of time to devote to this game mode are going to get consistently and mercilessly stomped into the ground without a regular group to play with. Even then, hiding in the reinforced walls of a massive fortress, combat is inevitable. The gods in Conan Exiles don’t take kindly to warriors hiding in their castles and will gladly be summoned to stomp out weaklings and cowards.

Such is the fate of those that don’t crush their enemies.

It’s worth noting that Conan Exiles is an early access title, which means that more content is on the way before the game is fully released. In fact, the game just recently released a new area called “The Frozen North”. I tried to wander into this new area during my time playing the game, but it’s worth noting that this new region is for higher level players who have the gear to take on the many difficult challenges this area represents.

Beyond that, I suspect that Funcom have even more up their sleeves for even later in the development cycle. A brief look at the game site shows how dedicated they’ve been up to this point, so it would definitely be worth keeping an eye on the game as it nears full release. 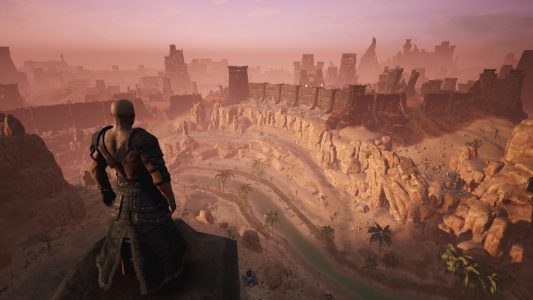 Despite how hard Conan Exiles tries to embody the spirit of its source material, the way in which it builds upon the world – and lore – misses the mark.

Perhaps it is the general lack of direction. There’s currently no story to the game other than an opening cut scene where Conan inexplicably frees you from the cross you’ve been affixed to. Why would he do such a thing? What reason did he have to do so? These questions aren’t answered, nor is one hinted at. Instead, survival is the only real quest imparted upon the player’s wayward soul.

Perhaps it’s the world stuffed full of enemies of one kind or another. Conan Exiles is a beautiful game, but the world is so full of enemies to fight, that there’s really never any time to enjoy the beauty within. Whether defending my small corner of the world from enemy respawns or traveling from point A to point B, the need to vanquish one enemy or another was constant. The killing quickly became a chore. As did death as I was often driven from one set of deadly jaws to another.

Or perhaps it’s because the world just doesn’t invoke the same feeling the campy movies from the 80s did. I was a huge fan of Conan the Barbarian, Conan the Destroyer, and even Red Sonja (I don’t care what anyone says – Kalidor is Conan). And, playing Conan Exiles just doesn’t feel the same. Of course, I can’t really expect it to, but there is a certain expectation when a game picks up the mantle of such a significant piece of pop-culture.

I’ve known about Conan Exiles since it’s release on steam, but not for the reason you’d expect. When the game first released, nearly every game news site out there published a story that was just as much about the character creation aspect of the game than the actual game itself. This is because the developers gave players the ability to customize more intimate details of their character. While that level of freedom isn’t a bad thing, there’s something to be said when that’s what everyone focuses on at the game’s initial release. 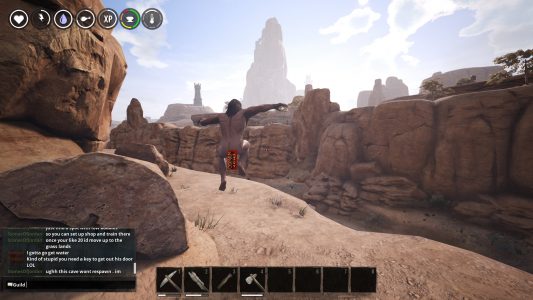 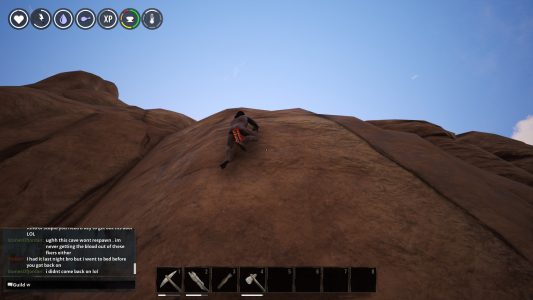 To a degree, the initial hilarity intertwined with that aspect of the game is what makes the first few hours enjoyable. Running around with your gigantic unmentionables dangling about is funny in the most juvenile way. But once pants are crafted, the magic seems to fade. That’s when things are laid bare for what they actually are – a survival game in the same vein of ARK: Survival Evolved.

Conan Exiles isn’t a bad game, but it’s definitely something that fills a very specific niche. Personally, I’m not a fan of that niche, but I know people who enjoy it immensely. And for those kinds of people, this game is going to be the bread and butter of survival (even more so if spending hours upon hours of taming dinosaurs isn’t your thing).