Review: Ancient Frontier – Too much frustration on the edge of civilization?

4X strategy games are typically well-received thanks to their robust systems coming together in a harmony of strategy and combat. Most developers spend years making sure that each system is perfectly balanced against another, and when such titles are released, you get perfection.

But what happens when a game focuses down on only a single aspect of a 4X title? Can only one piece of the puzzle work by itself?

Half of a Whole

Players who have spent time with 4X strategy games like Endless Legend or Age of Wonders III will already be intimately familiar with the basic concept of Ancient Frontier. Those that aren’t should know that these games are strategy games with a strategic over-world map and combat that takes place on a hex-based grid. Ancient Frontier takes just the combat aspect of the 4X strategy genre, and strips away the empire-building in favor of a mission-based campaign.

The result is interesting, but mostly disappointing.

It takes a while to get used to the fact that combat is the end-all of Ancient Frontier, but after the first few battles are out of the way, acceptance has set in. Around the same time, an obvious question comes to mind: is this all there is?

The answer is yes and no.

Fair Weather Studios has gone to great lengths to add depth to an otherwise shallow combat system. Each mission earns players Hydrium, Proto Energy, and Data, which can be used to purchase ships, equipment, and research between missions. 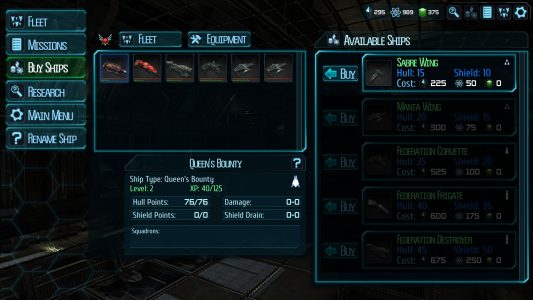 Ships are divided into a few classes, each tending to excel at a certain thing. Fighters are good at reconnaissance, and can overwhelm in numbers. Corvettes, the next step up in size, are very good at engaging both fighters and larger ships, but are prone to take more damage; because of their impressive firepower and low health/shields, enemy ships tend to focus on them. Frigates are a step above that and are a “jack-of-all-trades” type ship. Lastly, Capital Ships are the heaviest vessels, good at dealing massive amounts of damage to everything on the field. Their drawback is a slower movement speed, meaning that if the rest of a player’s fleet is composed of smaller vessels, it can take a while for these behemoths to join the fray.

But while there are many classes of ship available, there isn’t much variety in each class.

Rewarded at the end of each mission, equipment allows players to customize their armada. But equipment isn’t meant to provide a wholesale leg-up on the competition; it just provides certain trade-offs. One piece of equipment might buff a ship’s shields at an increased deployment cost, while another might buff damage and lower a ship’s chance to dodge.

It’s an interesting dynamic, but one that feels somewhat thin.

While players will wind up accumulating plenty of loot over the course of missions, ships are restricted to fitting certain kinds of equipment, so the bonuses available for each ship type end up looking the same as the campaign goes on, much to the detriment of the system as a whole. 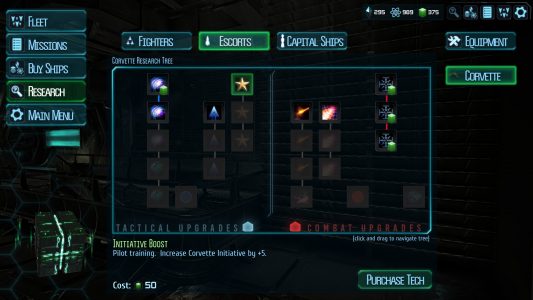 Research feels similar to the other systems in the game. Each class of ship has an available upgrade tree, but each is remarkably similar to the next, with many powers overlapping from one ship class to the next. There are some unique skills to each vessel, but none are really that much more interesting than the base skills.

Overall, the research available provides meaningful boosts to each class of ship, but more than enough data is available in each mission; all of the available research can be unlocked in short order. This winds up making the system feel like almost an afterthought. Yes, it’s nice to have incremental bonuses to damage, shields, accuracy, and other stats, but what’s the point when you can unlock many of these for each ship type after only a few missions?

Equipment also has research associated with it, but I found myself ignoring those options when I had enough data to put into my ships instead.

Unfortunately, none of the aforementioned systems can do much to make missions feel remarkable. Objectives are presented to the player as either main missions, side missions, or simulations. Main missions advance the story, while side missions are simply vehicles to earn more core resources to support a player’s fleet. Side missions, however, are restricted; only a few are available per “sector,” so the game forces the player to move forward in the story instead of undertaking all available missions. The reason for this mechanic is to force the player to make a strategic choice, but on normal difficulty level, this has little impact. 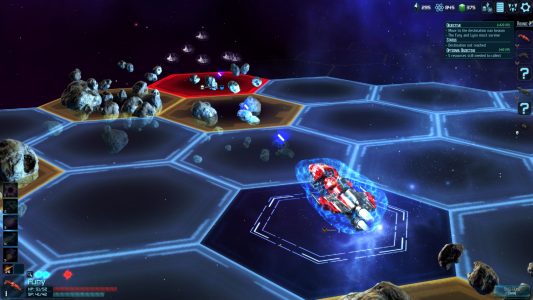 This is all well and good, but the formula quickly feels tired. There’s only so many times that shooting wave after wave of pirate vessels can feel fresh before the desire to do something – anything – else is overwhelming, and with the limited range of ships available, this means that many engagements will feel the same. So, unless the story is particularly engaging, the shallow combat won’t be enough to keep you coming back consistently.

That’s the question, then: Is the story worthwhile?

The story in Ancient Frontier is developed through short conversations between each main mission. And each is, surprisingly, fully voice acted. This is impressive in its own right, but when the terrible voice acting and dubious writing are combined, the presentation is more laughable than anything else.

Considering the supposed seriousness of the main storyline (and the bleakness of living out on the frontier), there is far too much sexual innuendo present in this game. At least, in the Federation story line. 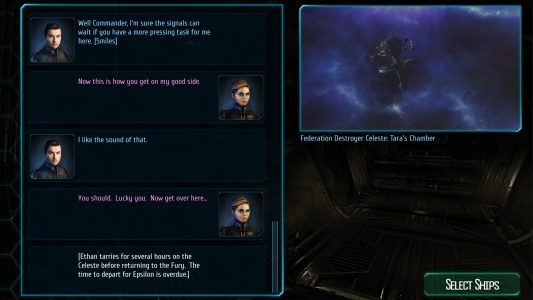 There’s a second (Alliance) story line where you essentially play the other side of the coin, but I haven’t delved too deep into it, so I can’t say whether everyone out on the frontier is prone to cringey sexual innuendo with colleagues.

It’s also worth noting that the game’s tutorial is almost a story element – for better and worse. While it serves to introduce the player to the three main characters (of the federation arc, anyway), it basically boils down to watching a twenty-minute video while they banter about the game’s many systems. And the tutorial mission is brief and useless. I was stomped into the ground inside of one round, but I’m almost certain it was scripted to play out that way.

In Space, Not Even Your Friends Can Hear You Scream

My biggest disappointment with Ancient Frontier is the lack of multiplayer. I’ve played countless hours of Age of Wonders III with friends, and some of the best parts of that game were piling multiple armies onto a field and engaging an enemy. And despite Ancient Frontier’s shortcomings, I can’t help but feel like co-op, or even the simplest multiplayer mode, would have made the game that much better. As it stands, there really isn’t enough meat here for the game to stand on its own.

As lackluster as the game feels, there definitely a rough charm to it.

The voice acting between each mission is terrible, yet I couldn’t help but find myself enamored with the main characters. And, to a degree, I found each briefing to strike a balance of serious and funny that invoked a feeling somewhere close to the original Starship Troopers movie—though, in saying this, you need to understand that this was completely unintentional – I’m quite sure the developer means for every single line of dialogue to be taken seriously by the player.

Combat is a series of engagements that invoke a sense of deja vu, but I still get a rush every time my corvette darts across the battlefield and decimates a pirate. And I still grin every time I manage to deploy units into a perfect pincer maneuver (somehow, because I’m consistently terrible at strategy games). 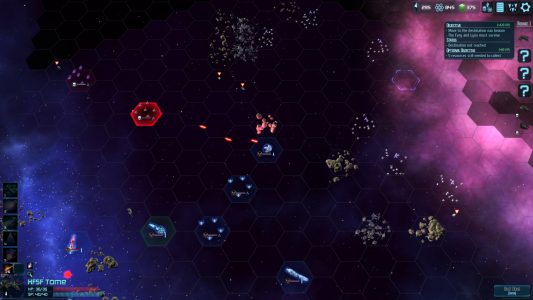 And no matter what game I’m playing, it’s always fun to distribute points among a number of varied upgrade trees. I don’t think that will ever get old and it doesn’t here either.

But all that being said, Ancient Frontier wears out its welcome far too quickly. For hardcore fans of the strategy genre, or players who really enjoy hex based combat, this is going to be a title to look into. For a few others, it will be something worth picking up during a Steam sale. But for everyone else, the Frontier is likely best left for the most intrepid of explorers.