Albion Online is an upcoming isomorphic MMO in closed beta from Sandbox Interactive. As soon as we heard the words ‘Sandbox’ and ‘MMO’, we here at TMC decided we needed to sneak our way in and get a look around. Ok, ‘MMO’ is an acronym, not a word. Sue me. Any game in beta still has some rough edges, but what we found holds a lot of promise.

A word of warning to the reader: there are two TMC editors taking an early look at the game. Both of us are ’embracing the new player experience and mindset.’ What does that mean? That means ‘wow, we’re bad at this.’ So as this series of articles delves into Albion Online, remember: do as we say, not as… Well, you get the idea. We’ll be taking a look at many of the game’s features and quirks, and relating a few of our missteps along the way. If you’re in the beta as well, feel free to drop us a line in the comments section to discuss better ways to play. We’ve seen people running around with guild tags that suggest you are. Your fellow readers may thank you.

Albion’s visual style is the first thing that jumped out at me when I started the game. The character and scenery models use a simple aesthetic that eschews a lot of detail. Most newer games like Ark and H1Z1 use a more realistic visual style. It’s almost expected: new games mean more detailed graphics. Instead, Sandbox has opted for something more like Boom Beach or Clash of Clans. It’s not an unprecedented move. Back in 2004, most of the new MMOs tried to go toward higher levels of realism. Guild Wars, EverQuest II, Anarchy Online, Star Wars: Galaxies, they all trended that way. Another company decided to go with a different look. They chose something more in-keeping with their own sense of presentation. Blizzard’s decision to go with their own style helped it stand out from the field. It wasn’t the sole reason for the game’s success, but that distinctiveness helped.

What matters, though, is that the decision works for Albion Online’s top-down view. The player isn’t going to be spending a lot of time looking at the awesome details of their gear anyway. The streamlined graphics avoids performance issues, even on older machines. A a lot of pieces are going to be in motion on the screen at once, especially when you are in Queensmarket or other cities. Most of them will huddle around the bank, sort of like a top-down view of Ironforge back in the early days of WoW. And by the way, sorry to anyone I’m triggering. I should have warned you I’d be mentioning WoW.

Keeping with the simple visuals, character customization options are somewhat limited. Each gender has six basic portrait templates. You can customize each. The options are skin and hair color, hair style, facial hair for the guys, and underwear style and color. You read that last one right. I said underwear style. No leopard-skin speedo, but some people like the banana-hammock, and some prefer a nightshirt. Albion lets you choose. And that’s kind of nice, because when you start off, that’s all you’ve got. 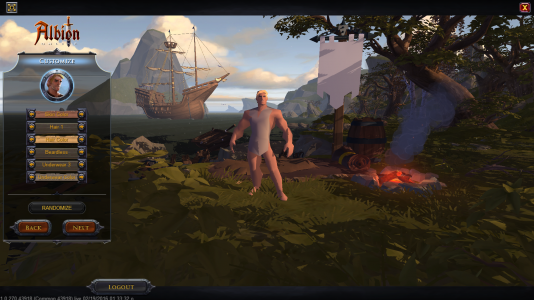 See? Totally not kidding about the underwear options there, folks.

It’s also all you need, at least at first. Back in the days of EverQuest, game developers needed to give everyone some starter gear. These days, though, we’ve all played Minecraft. When you’re naked and empty-handed, what do you do? Well, the first thing you need to do is find a tree.

Moving around in Albion is 100% mouse-driven. Your old friends WASD aren’t going to help you get around. Instead, those keys are already bound to special abilities. You don’t have those yet, though, so don’t worry about them. Right now, you need to worry about how to get places and interact with things. You’re in luck, too. Both of those things happen the same way: You click.

Click on a spot, and you run straight over there. Click on a tree, and you start punching away. What if something’s in the way, though? You don’t path around obstacles or elevation changes. Instead, you have to guide your character around them. Albion gives the player an easy way to do that without dozens of clicks. Click, and hold. As long as you hold down that mouse button your character continues running toward the cursor. It keeps going, even if you move the mouse all around the screen. So click! Hold! Run up… And punch a tree.

This is where the gathering system leads you into the crafting system. There are several starting locations. Near each one are the trees and rocks you need. Also nearby is a man who looks rather like a blacksmith. He’s in a campsite with a couple of things that look like anvils. Welcome to your first crafting station, a Beginner crafting station. At the Beginner’s crafting station, you can Beginner’s items. Imagine that. You can make a Beginning’s broadsword, shield, armor, and of course, tools.

The Beginner crafting station lets you create every type of Beginner item. It is the only level where you can create all types of equipment at a single station. We’ll get into higher levels of gear shortly.

For now, Beginner gear isn’t exactly the most amazing stuff in the world, but it gets the job done. It also helps familiarize you with an important basic concept: right tool for the job. If you want to mine, you need a pickaxe. If you want to cut wood, you need an axe, and so on. Beginner stone and wood at this level don’t need tools to gather, which just makes sense. After all, you need to be able to get the raw materials to make your first tools. Skinning does need a tool, though: a skinning knife, and skinning is how you get the leather for your armor.

There are four different types of nodes for resources: trees, rocks, ores, and crops. The fifth material is hides. You collect hides from slain animals, like wolves and foxes. Even that cute little bunny you beat to death with your bare hands gives a hide.

For the most part, nodes are static. If it’s not an animal, it will always be in the same place. If it is an animal, there’s a limited area where it spawns. Once spawned, the resource nodes have differing amounts of resources. Some types have a small amount of resources when they spawn, like ores. If left undisturbed, these nodes will regenerate their full amount of resources over time.

The idea of specializing your equipment for tasks isn’t new to Albion. It is important to the game, though. Albion doesn’t have character classes. Instead, all your abilities beyond ‘punch a rabbit’ come from your gear. In addition, almost every piece of equipment you use was made by a player. Early on, that player is most likely to be you. As you progress, though, specializing will make it easier to get certain items off the market. It also means understanding the crafting system can be a major aspect of the game.

Which means it’s good that that system is pretty darn straight forward. You go to a crafting station and look through its available recipes. If you have what you need to make the item, you push the button and it gets made. If you don’t have what you need, go get it. When you make an item, you get the option to select one or more spells to build into that item. These spells are the special abilities granted when using that item. They’re also the things your most accessible keys are bound to, like ‘a’. A set of boots might grant bonus carrying capacity. Chest armor might grant a self-heal. A sword might have a disarm special, and so on. All your special abilities available come from your equipment. As you level up, more powerful equipment with better specials becomes available.

Some of you may have noticed that bit about players making almost everything. The things they don’t make come from the cash shop. You don’t need any of that stuff, it just makes it easier.

Albion’s got a pretty active market-slash-auction house. If you can make it, you can sell it. Heck, for the most part, if you can get it, you can sell it for silver. This includes items purchased from the premium shop with gold coins. It also includes gold coins themselves. Those gold coins buy premium shop items, including premium account time. Last time I checked, 2500 gold gets you 30 days of premium time. So you can use your normal silver production to keep your account in premium time. Of course, that means you have to be able to make enough regular money via in-game activities.

You might be thinking that this is starting to sound a little familiar. If so, you aren’t alone in thinking that. That similarity is part of why we decided to take a look at Albion in the first place.

It also means it’s important to know the value of items, and money. There aren’t NPC vendors to establish baseline prices for anything. And that means that if you can convince someone to pay a ridiculous amount for something, good for you. One tip, though: if someone offers to sell you a set of Journeyman gear for the low low price of 6,000 gold? Don’t do it. Once it’s out of your hands, it’s gone. There’s no mechanism for getting your gold back from these unscrupulous bastards.

I’m looking at you here, Ryan. Two-and-a-half freakin’ months’ worth of gold…

Leveling up takes using the gear, or making it. If you want to make gear of a certain level, you have to make enough of the gear from the level before it. If you want to use Adept’s plate, you have to kill enough things while wearing Journeyman’s plate. This can all get confusing. You’re in luck, though! Sandbox has included a handy advancement tree. This is the Destiny Board, with a default hotkey of ‘n’. 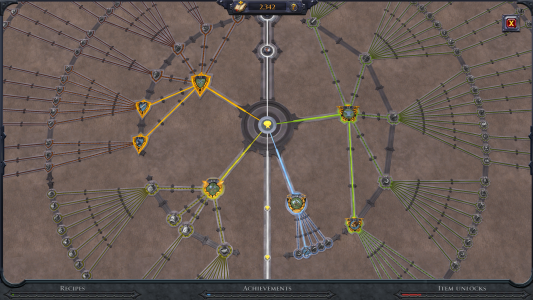 The Destiny Board will help you track and plan your progress.

The Destiny Board displays your progress via a radial display. The left side measures weapon and armor unlocks. The right side measures crafting. Each node on the branching arms of the trees is another unlock. You can click on these nodes to see what they offer, and what’s required to unlock them. 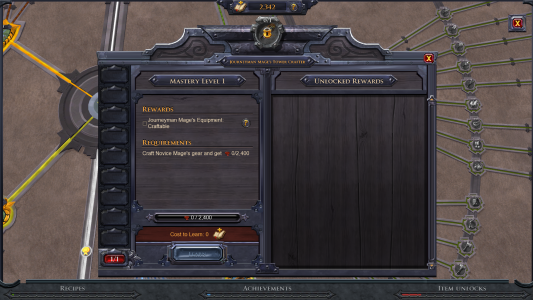 Clicking into each node on the tree lets you check the requirements to make progress.

From Beginner, the next step up in gear is Novice. This is where the chain of specialized facilities begins. From here on, you use different stations to process different materials. Raw materials include wood, hides, stone, metal ore, and fibers. They get into useable forms: boards, leather, blocks, ingots, and fabric. Novice is also the first level where repairing your equipment becomes necessary. As you play, normal wear and tear damages your items over time. Repairs cost silver, and materials. The latest patch, Brutus, added the ‘Repair All’ button, and streamlined the process.

We’re getting ahead of ourselves, though.. So, now that you’ve got some gear, what do you do with it?

Find out in Part 2 of our Albion Online Preview. Ryan will be talking combat, from equipment-based classes and dungeon-diving to a tale of babby’s first PVP.

This article originally appeared on TheMittani.com, written by Arrendis and Ryan.