I wish the following entry in my journal contained a valiant story of the newbie who achieves greatness through pluck and courage. Rather, it will tell the completely humiliating story of my participation in a massive battle over a Keepstar. I have decided to tell the whole truth, without varnishing any aspect, to keep the facts clear despite embarrassment. Several readers of my previous journal entries have written to me to express how they enjoyed hearing my stories, which reminded them of their own experiences when they were new players. So, perhaps my story has other precedents and I’m not a complete, isolated rube, though right now I feel pretty much like the worst pilot in the entire Eve universe.

The Ping and I

I’m in KarmaFleet, and a ping went out over Jabber that at 1800 Saturday, September 15, 2018, a fleet should assemble at the Keepstar of 6RCQ-5. Our goal was to destroy the armor timer of a nearby enemy Keepstar. Ever since downloading the game—indeed even before I downloaded it—I hoped one day to participate in such a battle, even in as small a way as providing ore for a ship that would participate in the battle. So, when the opportunity presented itself to actually be on the front lines, not just read or write about it, I decided I wanted that experience.

This IS My First Rodeo

I had learned a few things about fleets: how to join one, how to get on the appropriate Mumble channel, how to “align” for warp, and so on, but the only real experience I had was in tiny two-pilot fleets. I debated with myself whether I should try and join this mammoth effort, or do some additional training in order not to make a fool of myself. But I really wanted to see things up close, and I thought I might actually be able to contribute, albeit in a very small way. The Vigil, my buddy Raz had told me, was always a good ship in a fleet, for it had the ability to “paint” targets of opportunity. I had a Vigil stationed at 6RCQ, which I had set as my home station. As the hour approached for the battle, I threw caution to the winds, self-destructed near 1DQ, and respawned in the 6RCQ Keepstar. I got in the Vigil and began paying very close attention to Jabber. I managed to see a ping, join a fleet, and get on the correct Mumble channel, though each of these tasks was made more difficult by my nervous fingers trying to find the correct keys and my mind trying to remember the steps.

As I looked over the list of ships tethered to the Keepstar, I could hardly believe the vast number: a dozen Vigils at least (that was a welcomed sight; I wouldn’t be the only one in a tiny EWAR ship), along with dozens and dozens of battleships. I just kept scrolling and scrolling on the overview and thought, “How can we lose! This must be the most ships ever assembled.” I knew intellectually that this battle was going to be rather small, with little opposition expected, but it didn’t feel that way to me. This was no training mission or security romp. We were bent on destruction and revenge and I was going to be a part of it, or hoped I would be. I listened closely on Mumble and things began to get more intense. I kept scrolling to find if I knew anyone in that huge collection of friendly ships, and I was very pleased to see Raz there, for he had helped me a lot in the past. I quickly opened a private chat, said hi, and that I had no idea what I was doing. He encouraged me, but said he had to pay attention to the fleet channel and Mumble.

How Can I Not Find a Titan?

Very soon my ship warped away from the Keepstar. I had done nothing. I was now “in fleet” and under the control of the FC. We didn’t go far, staying in the system. Were told to find the titan and approach to within 1,000 meters of it. Find the titan. Well, whoever gave that advice didn’t know that I had no idea what to look for. A titan? I thought I saw about 50 titans all around me. Indeed, my screen was so filled with ships all I could see was clutter. How to find a titan in this mess?

Meanwhile, tick tick tick and I already heard talk from the FC that we should prepare to jump. Jump where? How? And where’s the cursed titan? I used my private chat to talk to my friend and said, “How do I find the titan?” “It’s huge,” he said, “and should be purple”

I was surrounded by huge ships. I was in a forest of redwoods, looking for the biggest one of the bunch. Ships began blinking out and I knew the fleet was warping. Soon, I was about the only ship left. How humiliating! To not even make the jump! To not even have a chance to get in the action! I quickly contacted Raz and asked where he was. He replied with the system name and suggested I might try just going the long way, jump by jump. “You’ll probably die,” he said, “but maybe you’ll get lucky.”

I put the system as my destination and made about four jumps, almost getting tackled by two enemies, but finally warping to within 1,000 meters of Raz. Hallelujah, I had made it! Even if I now died I could say I had participated in the battle. OK, where’s the target? I knew enough to have the fleet history activated, but it helped very a little. I saw a target there and locked on, setting loose my one lone drone, which could dish out all of 20 HP onto a Cyno-something. Initially I was too far away, but approached and I think I got a hit or two in before my drone was destroyed.

The Best Seat in the House

At this point I had no offensive capability at all and there were no enemies to paint. I had a fine view of the action, though, as our ships pounded the Keepstar and the armor very gradually depleted. The scene was amazing. It was a slow-mo, TiDi-affected, laser light show of epic dimensions. I took a few screenshots to try and memorialize the moment. Note in lower left chatbox in the screenshot below my childlike wonder, a child going to Disneyland for the first time. 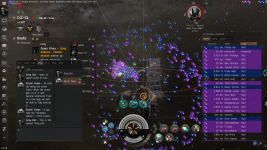 The lull in the action was filled with a very odd moment. In the midst of the battle, TheMittani came over Mumble to deliver a fireside chat. I was amazed. It was like listening to Ceasar broadcasting to his distant legions in Britannia, mid-battle. Did FDR break in on D-Day with a soothing chat of news from home? The juxtaposition of hellfire raining down on the Keepstar, with TheMittani’s calm, conversational tone was a Twilight Zone moment for me. Wow, I thought. This war must be going well if in its very midst we can hear quiet moments of future actions, no rush, no worries, no problems. I must admit I listened with only a small portion of my attention, because I was desperately writing Raz for instructions on how to find the correct ship to make the jump back. I didn’t want to be left behind a second time and have to make a return solo journey.

The fireside chat ended shortly before the Keepstar’s armor was completely gone. Soon, fleets began warping away. I worried I was left behind already, but soon I too was warping without controlling my ship. We again gathered to make a jump; this time I was determined to find the “titan” the FC mentioned. With Raz’s help, I found it: The lone Ragnarok. I approached to 1000 meters and listened for the command to jump. I heard nothing, but soon ships were disappearing like cotton candy near a crowd of school children. I clicked in space right next to the Ragnarok, but I could see no jump bridge anywhere. I was expecting something like the JB near 1DQ1-A that goes to 7G. Nothing. Oh serpents! Soon, two ships were left—me and the Ragnarok. How humiliating! Again! I set my return voyage manually and thought I could make it. The Keepstar at 6RCQ was only about four-five jumps away. Off I sailed. After two jumps I had a close call. On the third warp gate I was destroyed and podded.

I respawned at 6RCQ with a tremendous mixture of emotions. I was elated that I had participated in the battle. True enough, I had done nothing. But I had witnessed the event live, not in a YouTube video or over Twitch. I was freaking there, man! My other emotion was depression. I hadn’t known what was going on; I didn’t make the jumps, my lame drone got destroyed, and I lost the ship Raz had made for me.

I also felt I had learned. I had recognized the titan on the exodus, even though I didn’t click in the correct place to jump. I had correctly gotten in a fleet, activated the Mumble channel, made it to the battle, attacked the cyno with my drone. I have played a total of 38 days and this day is the day of all days so far. I can only imagine what it must feel like to be in such a battle when you actually know what you’re doing.

What is right and what is wrong?  These terms are...

The Myth of Capitalist EV...

The title of this article, for many, will seem shockin...

Wishing You A Merry EVE-v...

With the upcoming 18th anniversary of Eve Online, CCP...

Week 44 of World War Bee once again slowed down from W...