All is not well in Russian Eve

In September, parts of the Russian community have written an open letter to CCP, as many do. Unlike others, however, they have not only put the letter out on Reddit and the forums, where it has gathered over 300 supporters, but they have also sent it to CCP’s offices by snail mail. In this day and age, this constitutes a show of dedication. To understand what has prompted this latest outburst of righteous fury, we need to look at the history of EVE’s localization.

Game localization has been ‘a thing’ since before the advent of widespread computer usage. It was first attempted by Japanese developers, who in the 1970s observed the rise of arcade halls in the Unites States and had a budding games industry to match this growing export market. Thus they brought us the first iteration of Pac-Man that was developed in English. With the English market growing and other regional markets following suit, the practice began of developing games in English first, and then later translating them. First, only ‘box and docs’ – packaging and guidebook – were translated from English into French, Italian, German and Spanish, leading to the acronym E-FIGS. With the advent of the 1990s and their more capable computers, developers gradually started to translate the UI and subtitles. 1998 saw the first fully translated game with Bioware’s Baldur’s Gate, which was localized for the Spanish market. At the time, localization was not common for games. The time and effort were too costly for the mostly short-lived life of computer games. 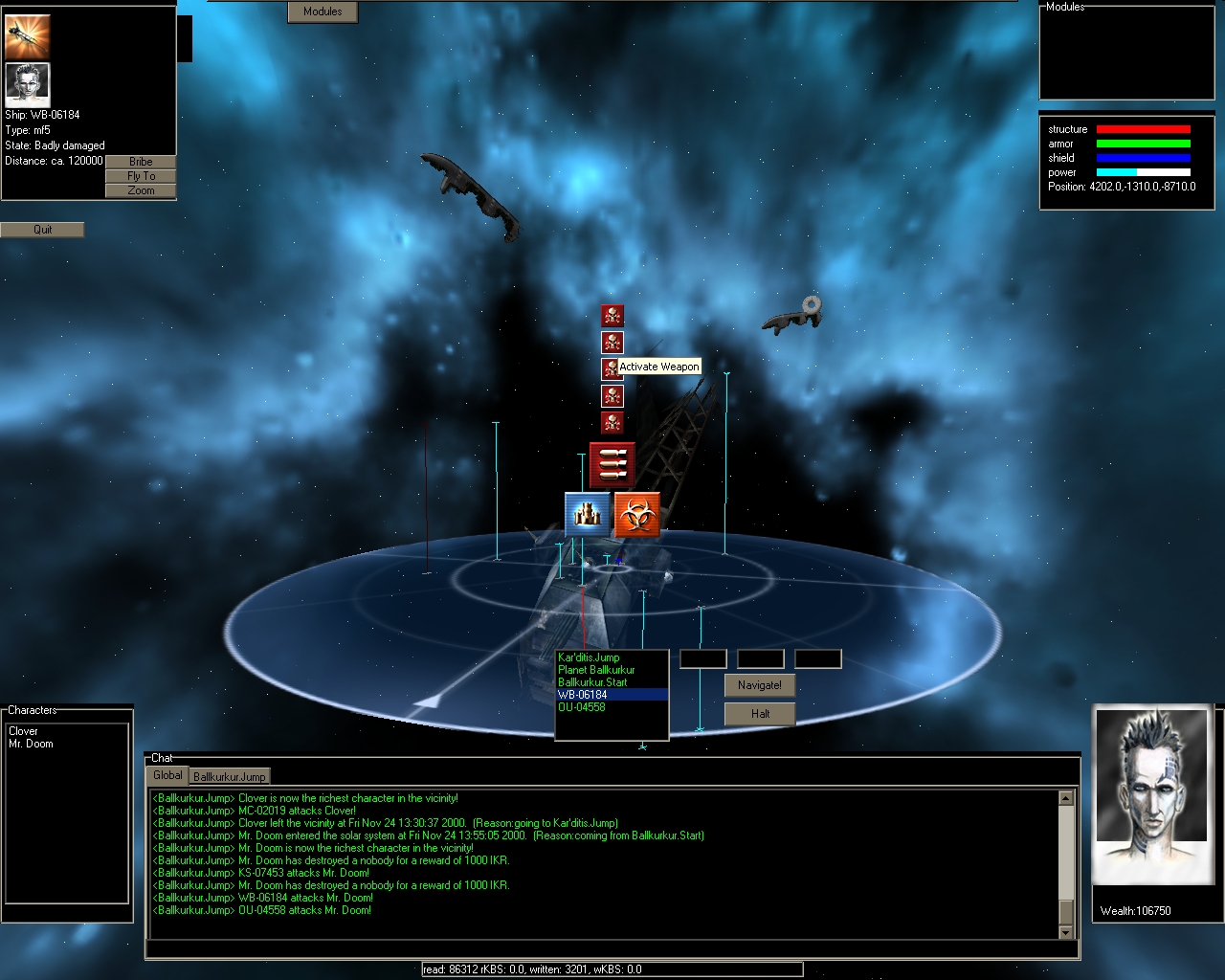 In 1997, a few guys in Iceland started a company to develop MMORPGs, hustled their way to some seed money, and began developing what is now known as EVE Online. EVE – like many other games of that time – was developed in English only, with no mind paid towards a potential translation. Three years after launch, Eve had gained such traction in the MMO world that CCP felt that it would gain additional market share by breaking into a foreign market. A sizeable fraction of EVE Online players was already located in Germany, and it got some attention in the local gaming press. Thus was decided that German would be the first language EVE would be translated to. At that time CCP did not have much experience with localization at all and had not originally planned to localize the game at all. The result was that all the strings (the text you see in the game) needed to be replaced manually over the course of the translation. A lack of quality assurance in choosing the providers led to the German translation being a tad rocky – but that would be nothing compared to the first draft of the Russian client. The company contracted to do the translation apparently used machine translation – ‘Warp to fleet member‘ transformed into something resembling ‘to slide on fleet member‘ (including, I’ve been told, all the sexual connotation this evokes in English). Knowing EVE’s player base, and how much they care for their game, it was clear: There was trouble brewing. Nonetheless, both translation attempts brought in a sizeable influx of foreign players, and CCP decided to continue porting the game over to different languages.

Yet, French and Japanese, the next languages marked for localization, had some unique grammatical features that made them unfeasible to translate under the existing system, where all the changes needed to be typed into the code by a programmer. Instead, CCP developed a technology they called ‘Cerberus’ that essentially brought EVE up to industry standards for localization. Over the next few years, French and Japanese were deployed. The work on the Russian localization was a slow grind. In 2013, CSM Member Korvin published a first open letter on the forums. Then-lead of global localization, CCP Shiny, who left the company in 2014, agreed with many of his points and promised to take them into consideration. As a result, an active user of the Eve-RU.com forums by the in-game name Paul Clancy, was contracted by CCP to work on the Russian localization of EVE. The Russian community was happy. Until they saw his ‘grand plan’ for EVE which, to many, had the sound of ‘Military Science Simulator 1966’.

It is notoriously difficult to write about how a language feels like to a native speaker. Often, the easiest way is to give a direct transliteration of the words in question, even if that does not bring across the feelings a word evokes. Now, for one moment, think about how you would feel getting hot-dropped by an autonomous deployment ship. That’s what a carrier is in the Russian version of EVE Online. And the Russian word is even longer. Going further, Russian highsec requires your degree of conformity to be higher than -5.0 – that’s for security status. Both translations exist in spite of direct translations of the terms being available. To highlight one last absurdity, let us talk about missiles. Heavy missiles are high-yield missiles. Heavy assault missiles are small-scale high-yield missiles. And advanced high-precision XL cruise missiles? That would be very high yield long-range combat missiles with high-precision homing head. If your brain is melting and you shake your head about who could possibly have thought up those translations, worry not – large parts of the Russian community are with you.

You won’t believe this, but russian version of eve has actual CCP logic from Eve

But why does that matter? After all, Russian speakers could just use the English client if they don’t like their translation, right? Technically correct, but wrong. An estimated 8% of the Russian population speaks English to some degree. So, while a German capsuleer with moderate knowledge of English might use a dictionary to reverse translate Waffe des Tages des Jüngsten Gerichts, the German client’s famously bad translation of doomsday device, a Russian-speaking player with the Russian client would be out of luck. It is that bad, alphus_eve, one of the authors of the open letter, tells me, that Russian players are actively hindered in not only communicating with international players, but also with those Russian speakers who use the English client. This does disproportionally affect newer players, too. According to CCP, 25% of Russian-speaking players use the English client. This number shrinks to less than 10% if you include trial accounts.

“We insist on the use of the English client”

EVE Online is a game that can be very hectic, as all who have been in fleet fights know. I have asked Chutlanin, the head diplomat of the Red Menace Coalition, who occupy the galactic south, how they deal with the translation issues. “We insist on the use of the English client,” Chutlanin tells me, “and we explain the differences between the English and Russian client before every fleet.” There’s a rift, an abyss, between older players who use the English client, and newcomers who use the Russian client – and instead of closing the gap with the help of the community, it increases year by year, driven by the ideas of one translator. They call it Clancy-language, he tells me, and dev blogs translated into this Clancy-language are then sometimes translated into more understandable Russian by community members, for they are intelligible. A workaround that’s often cited by CCP is the hybrid client, where all the important names are in English, and all the descriptions remain in Russian. However, newcomers often start with a completely Russian client, until a more seasoned community member discourages them. As alphus_eve tells me, “Of course there is an option to show original in-game names and the client notifies you about it on first log-in, but, firstly, the interface remains carefully “translated” into nonsense and, secondly – who will choose poorly-known English over well-known Russian if not forewarned about the state of localization?” The learning cliff of EVE is notoriously hard to climb, even without language issues getting in your way.

It should be in the interest of us all, that EVE remains as accessible as possible, and given that this translation is an on-going issue, we have reached out to the CSM. However, multiple CSM members have told us that the Russian localization has not been brought up during the interactions of the CSM and CCP. CCP themselves did not reply to our request for a comment as to whether they had received the physical letter and are aware of the allegations levied against the Russian translation. We will need to see whether this open letter rouses CCP from its slumber and compels it to action, for the sake of Russian-speaking newbies and veterans alike.