With new parts, contract updates, more than a few changes to physics, and about 100 bug fixes, the just released version 1.0.5 update to Kerbal Space Program is more than ample proof that Squad is far from done with Kerbal Space Program. Many of the features have been covered in a fantastic video by Scott Manley, friend of TMC and space game aficionado, in a preview video embedded below.

After the release of 1.0.4, Squad had talked about the next update being version 1.1. The 1.1 update will bring the game to Unity 5, include 64 bit support, and add multithreaded physics calculations. However, the transition to 1.1 has taken a bit longer than they had anticipated. Rather than wait, the players were treated to a small(er) release, as Squad wanted to share some of the features that were ready. The patch notes can be found of the second page, but there are several very important features that bear talking about individually.

First up in the rather diminutive 24 megabyte download, and my favorite part of every update so far, we have a variety of new parts alongside the reworking of several old parts. Jet Engines received a lot of love with three brand new models: a small .625m jet named ‘Juno’, the super maneuverable 1m afterburning ‘Panther’ and a ‘Goliath’ 2.5m underslung turbofan. Each one has their own special place in the update. 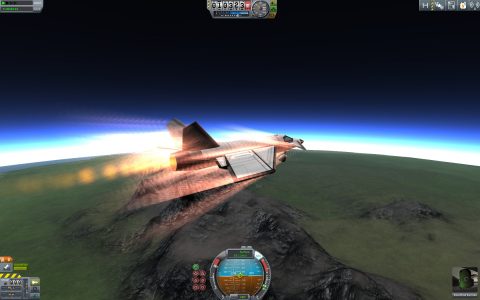 Full afterburner can get an aircraft moving. Note the reworked Mk.1 Cockpit

The ‘Panther’ engine allows players to engage an afterburner to get a sizable boost in power for a disproportionate loss of fuel economy. Switching between modes works much like the dual-mode SABRE engines, minus the rocket part requiring oxidizer. Players looking to build extremely agile aircraft should give a close look at the ‘Panther’; its unmatched thrust-vectoring range allows otherwise unremarkable jets to dance across the sky. Appropriately named, the ‘Goliath’ engine emulates many airliner-style turbofan engines, sacrificing speed for superior fuel efficiency and lift capability. The ‘Goliath’ also features thrust-reversal (much like its real-life counterpart), giving more braking options for the budding cargo or passenger plane tycoon. The ‘Juno’ 0.625m engine heralds a new set of parts for smaller planes. A small air intake and small liquid fuel tank that are also included with this update, making for practical miniature probe core planes, or even a jet-powered wingsuit for players wishing to emulate Jetman or evenRocketeer with their Kerbals. 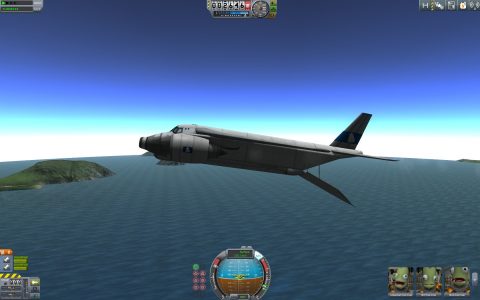 No longer a watery grave, it is still a last resort kind of landing spot. Also pictured: ‘Goliath’ turbofans and the new MK3 Cargo Ramp

Several other parts got a rather extensive makeover. The Mk1 external and IVA environment look drastically different, alongside other remodels to Mk1 parts, plus a new look for the Aerospike engine. Making small fighters is even more fun, even if they still aren’t practical in the vanilla game. If the new jets don’t strike your fancy, or you are just fond of some of your older designs, the ‘Wheesly’ and ‘Whiplash’ engines sport new models. A new rocket engine called the ‘Vector’ adds an extreme gimbal range to the lineup of available parts, allowing players to create very maneuverable rockets, or even some off-center center of gravity rockets that don’t spiral out of control.

Speaking of out of control, the thermodynamics model has been reworked again. Parts will now have a core temperature in addition to a skin temperature. This will cause parts to explode in a more predictable and logical pattern. The physics of landing on water is no longer an out of control one-way ticket to death and destruction either. In addition to reworking the physics of water so that you can actually land on it at a reasonable speed and survive, buoyancy has been completely reworked. Together, these changes make sea planes an option, though it is still perhaps not as viable an option as it is in the non-pixel world. Squad has added in depth-based achievement tracking, allowing for presumably new contracts to explore the depths of the sea as well as the expanses of space.

This new tracking folds into a rework of the whole progress tracking system that will allow for contracts for the first Kerbal spacewalk, crew transfers, and flight on other atmospheric planets and moons. The system will also track whether the achievement was manned or unmanned, and respond with more appropriate contracts that are challenging, but not out of your reach. The example given by developer HarvesteR was that, if you’re just launching spacecraft into Kerbal orbit, you won’t get contracts for Eve and Duna. Likewise, if you already have several space stations in orbit around Kerbin, you might get a contract to launch another habitation module that houses four crew and attach it to one of your stations rather than launch the fourty-first 16 person space station this year. This should help keep space less cluttered for those players who like a clean system, in addition to providing even more gameplay opportunities. 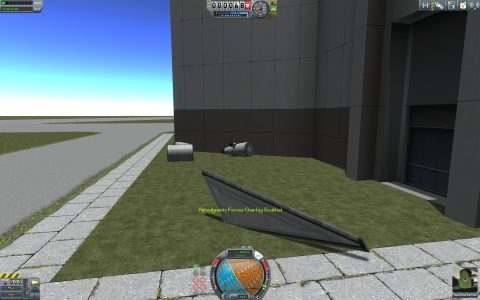 Smashed Kerbal creations are not required, but are absolutely encouraged.

There are other quality of life tweaks included in 1.0.5, most notably the addition of the navball when controlling Kerbals in EVA. This will be most useful when players have contracts for surveys in specific locations, and be a general boon to players of all skill levels. Science transmissions will show the appropriate gain of reputation, funds, and science caused by active strategies. There is also a new strategy called Leadership Initiative Strategy for the more independent player, boosting rewards for achievements at the cost of contract rewards. Add in a very heavy dose of 100+ bug fixes, and you have the highlights of a rather hefty update in a small package with a very small numerical increase.

This is far from an all-inclusive list of the updates, and players interested should absolutely jump on the official forums, or check out the second page and give the patch notes a good read. This update may not have been the update many players were looking forward to, but it is a far cry from a disappointment. For some players, it may not be enough to pry players away from the launch of Fallout 4, or the Amarr Succession Trials, but this update to Kerbal Space Program adds even more polish to one of the best space games out right now.