Since the launch of Kerbal Space Program on Steam, I have logged approximately six hundred hours in the game. My Kerbals have landed on the Mun, Minmus, Duna, Ike, Gilly, Eeloo, and most of Jool’s moons. I sent several ill-fated missions to land on Jool and at least two crews of Kerbals stuck on perilous and pervasive purple planet, Eve. There are few things in the game that I have yet to achieve. While numerous changes throughout the development cycle breathed new life into the game, mods are my favorite way to make it feel new again. I have covered a wide variety of mods in the past. None of those have given me the sense of challenge, excitement, and accomplishment that Umbra Space Industries brings to the table.

The sum of its parts

Umbra Space Program comes in a variety of packages, with 15 different options on their Github. The modularity means that you can pick which ones you like. For my install, I elected to use them all as the system understandably works really well together. Some may find the Warp Drive or Nuclear Pulse Engine a little game breaking. I feel their cost in both Funds and Science is really well balanced against the difficulty of the life support system. More on the latter in a moment.

If you wish the Kerbal Space Program gave Kerbals more than just three jobs, the Colonization mod adds 10 new specialties. Biologists, miners, geologists, and many more add unique bonuses to various modules. USI adds dozens of new parts for rovers, space stations, colonies, and even submarines. Best of all, it gives a purpose to the parts as well. There are dozens of space stations and rovers across my saves, but with the addition of USI, I feel like I am building them for the first time. I must give consideration to supplies, living space, and switching out Kerbals over time. Space stations serve a much greater purpose than just research outpost or fuel stations.

Space is easy, returning is hard

The biggest change that USI brings is by way of life support. Kerbals consume the new resource “Supplies” and produce “Mulch”. According to the Wiki, Supplies represent everything a Kerbal needs: air, water, and food. Likewise, Mulch represents all the waste that Kerbals produce, not just the processed food matter. Under its default settings, USI assumes the Kerbals are well fed and hydrated enough for quick journeys, and capsules have sufficient air to sustain life for brief trips. Kerbals have a 15-day “grace period”. In other words, earlier on in your career when flying to suborbital or orbital flights, you need not worry about adding extra supplies. You can accomplish even (brief) trips to the Mun before adding supplies. Minmus is outside my reach without adding supplies.

Interplanetary trips require an incredible amount of supplies. Realistically, bringing that many supplies is impractical. Instead, Umbra includes modules to extend and create supplies. A recycler greatly reduces the number of supplies you need to bring. By using electricity, the recyclers reduce the number of supplies consumed for a set number of Kerbals. USI also includes converters that create new supplies by using another resource, fertilizer, along with the waste product, mulch. The recyclers can be run by anyone, but the converters need at least a scientist to run them. A farmer or biologist will give a boost to the converters.

Supplies are only one part of the Life Support system. Making sure to build sufficient vehicles for your Kerbals well-being is of similar importance. USI implements this by way of a habitation and homesickness counter. Much like supplies, Kerbals begin happy and healthy. Depending on the amount of room in a spaceship and the amenities therein, Kerbals have a certain amount of time before homesickness sets in. A Kerbal stuck in a small one-person capsule quickly gets tired of not moving and revolts. Kerbals that revolt are unable to do any work like research, flight, or EVA. Several lucky Kerbals survived this stage due to free return orbits. Many more met their demise. 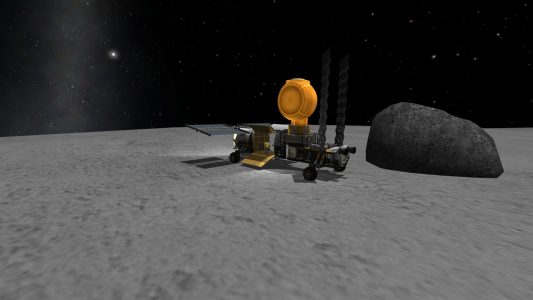 The Karibou Expedition Rover with some storage and habitation

The habitation portion can be tricky. Thankfully USI provides a tool in the Vehicle Assembly Building to estimate the amount of time a Kerbal can spend in a given living arrangement. After discovering it, I check the tool religiously. However—something I discovered only after killing a couple of my crews—many of the modules need to be “turned on” after launching to provide a benefit. Even something totally passive like the cupola displays this “feature”. My favorite way to do this with a sufficiently upgraded VAB: binding the turn-on function to the Stage action group. This gives you their benefit nigh automatically upon starting your rocket.

Making a house far from home

Another big part of the larger Umbra Space Industries mod is the introduction of colonization. This is where the true complexity lies; making food in space with the converters is just the tip of the iceberg. Mining is greatly expanded to include about thirteen different types of resources to be mined, refined into a further number of different resources, and then used in manufacturing. Each step of that requires a separate module to be launched and the appropriate crew aboard to make it function plus containers to store them.

Ideally, this would also be a skilled crew member, which requires the crew member to have experienced enough of the Kerbol system to be useful. This requires a lot of fuel and supplies on rockets, and that takes time and resources. And you can quickly see how this spirals out of control.

Your patience and hard work is rewarded. Achieving self-sufficient colonies able to make their own food and fuel indefinitely is far more rewarding than stock. You won’t be bored as you manage ever more advanced bases requiring building or assembling on the surface of extraterrestrial bodies, complex mining and manufacturing arrays, medical bays to mitigate homesickness, and warehousing to manage all the resources. It’s a difficult endeavor designed for the end-game and advanced player.

While I absolutely love the mod, I know it isn’t for everyone. The full mod is a pretty hefty install and can slow down starting the game up pretty severely. Playing the game in 32-bit mode is asking for it to crash due to memory shortages. My older PC, despite its 24 gigs of RAM and i7 Turbo, slows to a crawl on my bigger space stations. None of this is unique to the USI specifically, but a consequence of Unity, is still something to be mindful of. If you barely run KSP totally stock, you may find the mod unplayable.

Players that are a bit rusty at KSP may find the mod overly difficult. More supplies to consider means more weight. Consequently, rockets need to be bigger and stronger. Which makes them heavier, and the tyranny of rockets rears its ugly head. Designing efficient rockets is increasingly important to succeed. While this is an appeal to the veteran player, if you struggle to “finish” the game in vanilla form, you may want to dip your toes in more forgiving mods first.

Why you should be downloading it right now

If none of the above applies, I recommend heading to the Github page and downloading. The mod adds a balanced depth to the game that I’ve not seen in KSP. In truth, the closest thing I’ve seen to the USI mod is the renowned Complex Mod for Homeworld. Umbra adds a new feeling of accomplishment when you send your Kerbals to even something as near as Minmus. All the more if you play the game with no reverts, no extra ground stations, and mandatory signal to control probes. Every milestone a victory, every defeat an opportunity to build better spacecraft. There are things I would change and it doesn’t have the polish of Complex, but Complex has had a few years head start. Similar to Complex Mod in my Homeworld install, I can see USI staying in my Game Data folder for as long as it is supported.

As an aside, you can download it through CKAN, though my install wasn’t behaving properly. Redownloading it through the Github page and installing it manually solved these issues. If my prose has been unable to convince you, or you are incapable of running the mod, have hope. Scott Manley runs an excellent series showcasing the mod, alongside a number of other fantastic mods.