Infinity: Battlescape – “Planetside in Space” combat is fun, but suffers from a steep learning curve and lack of feedback.

Infinity: Battlescape was released in September to early access after being initially backed by a Kickstarter in 2015 that raised more than $332,000, and is developed by I-Novae Studios. Its key feature is large-scale space battles of up to an envisioned 500 people in a variety of ship classes, though this is currently limited to 300 people to allow for higher server stability.

The game is match based. Each team starts with a set of land bases, space stations, and factories that first need to be scanned down by the enemy team. Every couple of minutes, factories spawn a hauler which tries to drop off its cargo at the nearest land base or space station. If it succeeds in its mission, credits are evenly distributed to each member of the team. One team wins the match when they destroy all of the opposing team’s infrastructure. To guide the flow of the battle, an AI commander gives missions to attack certain bases, and pilots participating in completing these missions receive credits.

Credits can be used to purchase better ships, or replace your ship after you die. Players can choose between flying subcapital or capital vessels, and each ship has a different role. Interceptors excel at hunting down enemy sub-capitals and destroying base turrets. A bomber’s heavy missile armament makes it a direct threat to capitals. Corvettes serve as mobile resupply. Destroyers can lay mines and screen a capital force. Cruisers are adept at destroying enemy station modules, and carriers serve as a forward spawn point.

There is always something to do in Infinity: Battlescape, not least because the servers are populated by AI that participates in the battles. When a new human player enters the match, they take the place of an AI. When they leave, the AI comes back in. It is, however, easy to get lost, as the actual battlescape is a true-to-scale solar system. For early access, only one gas giant with five moons is available, but even this limited area gives plenty of room for massive-feeling space battles. 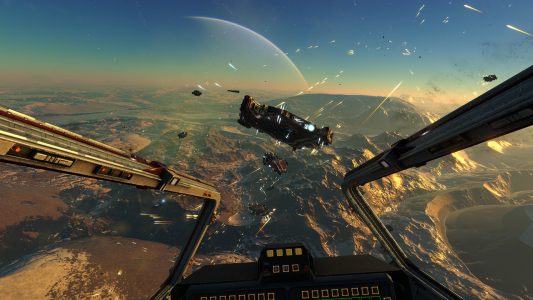 Incredible Ships and How to Control Them

Ship physics just work, and these physics are augmented by a flight assist that allows a more sensible approach to controlling a ship. This, however, can be deactivated, and lots of kills can be had by those people who master flight physics. As a downside, this makes for a fairly complicated set of controls that are not obvious at first sight. There is a bit of help, though: A keyboard map for the standard control scheme can be shown at any time by pressing the F9 key, yet you need to know what things do before you need to use them. I only learnt that ‘J’ enables a warp drive after seeing other players zip around.

While planned, ship customization does not currently exist. You are limited to a set of primary weapons, secondary weapons, missiles, and mines. This does not detract from the game, though, as it is complex enough without adding a multitude of weapons. Capital ship controls and their weapon systems still need a lot of love, but the developer has confirmed this to be high on their To-Do list. Overall, ship combat (especially with sub-capital ships in dogfights) feels really solid and enjoyable.

Down the Learning Cliff

While the underlying systems are solid, they are not very well telegraphed. I remember that in my first match, I was surprised that the fight was over so fast. The very early development stage of the map makes it difficult to determine how the battle progresses for your team, where you are in relation to your team, and conversely, where help would be most needed. At the moment, the game also lacks a team chat of any sort, so it’s almost impossible to coordinate with team members.

Overall, the complexity of the systems and the lack of feedback inside the game make learning by trial-and-error an arduous process that reminded me of the first time I logged into Eve. At this stage, the game does not have a tutorial to explain its core systems, and had I not looked through the game’s forum, I would not know what to do while playing. This is fairly frustrating and, for a few players, a definite turn-off. I did see this sentiment reflected in the in-game chat, where people asked a lot of questions and received only a few answers due to a shared lack of understanding.

The game looks decent, stellar even when you consider it was made by a team of five. However, it needs optimization to run at reliably high frame rates. I have a machine that fulfills the recommended settings, and still struggled in dogfights in big battles at low settings, reduced from the “high” preset the game started out with, insisting on taking 100% of the available GPU processing power. It also stubbornly refused to run in anything but full screen mode, which prevented me from adding screenshots of the absolutely beautiful vista of skimming through the valleys on one of the moons. 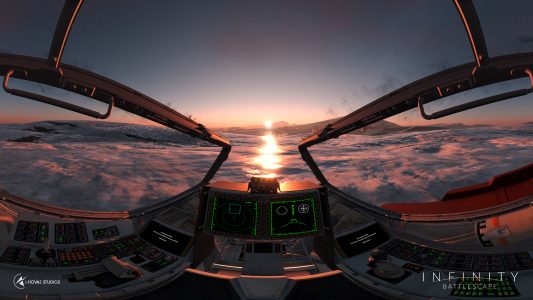 I enjoyed the time I have spent with Infinity: Battlescape, and I found the core systems to be a good basis for the developers to build upon. The space combat and controlling my ship felt good and responsive and not too arcade-like. The lack of any guidance, feedback and a tutorial is the main gripe I have about this game and at present, the only one that I see as a risk to its success. Without a sense of achievement, the prettiest space combat becomes stale, fast, and I did not get the necessary feedback from the game to become truly engrossed in it.

Infinity: Battlescape currently retails for 34,99€ (or local equivalent) on Steam. While it has a promising outlook, its Early Access tag is well deserved, and potential buyers should be well aware of that before buying into the continued development of the game. If you decide to play Infinity: Battlescape, we recommend you also join the game’s official Discord server.