I Want a Shot at Redemption

I need a photo-opportunity

I want a shot at redemption

Don’t want to end up a cartoon

In a cartoon graveyard – from “Call Me Al” by Paul Simon

On September 16 CCP announced changes to its permaban policy. INN covered the breaking news, but the story was framed in a particularly interesting way.

The typical phrasing for a news hit can be characterized as intentionally mundane:

These headlines typify CCP’s style: quick, informative, rather dull. “Capsuleer Redemption” strikes a completely different tone. “Redemption” is a religious term, one that comes with the idea of having fallen into a state of sin. To be “redeemed” is to be forgiven and to once again enter a state of grace.

Other elements of the article reinforce the religious nature of the second chance: “Our goal is to provide those pilots [one permabanned] with a shot at redemption and an opportunity to return to New Eden.” Again referencing “redemption” and “Eden” brings to mind the original fall from grace presented in the story of Adam and Eve being permabanned from the first Eden. Many great masters painted this scene, including Benjamin West, whose “The Expulsion of Adam and Eve from Paradise” is displayed below. 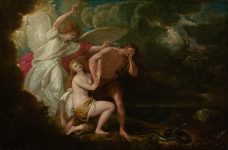 The Expulsion of Adam and Eve from Paradise, Benjamin West, 1791.

The expulsion from heaven, in Christian myth, was the event that triggered the original need for redemption. It constitutes, then, the first and most egregious sin. When God discovers Adam and Eve’s sin, they are driven out of the Garden of Eden, forced to find a new home. CCP has played on this mythology already with the name of the game’s universe: New Eden. It’s a new universe, a place where the fallen will be welcomed.

Even the new hit’s accompanying art signals a religious overtone. The image shows a darkened, backlit capsuleer, head bowed as if in prayer. Behind him, a light shines like the dawn of a new era. While the capsuleer inhabits the darkened space of the tomb or womb, the light behind him represents the redemption that can awaken the capsuleer and provide an answer to his prayers.

CCP’s header art for the Redemption program has some religious overtones of its own.

But why embed such religious language and symbolic imagery into what is ultimately just a policy change? The first paragraph of the news release suggests the answer: “After two years of this zero-tolerance policy, there have been instances whose outcomes did not reflect the good intentions we envisaged when we first implemented this policy.” While the phrases are vague (“instances whose outcomes” for example), they suggest that CCP itself felt the need for a dose of redemption for some of the things it had done.

Needing a second chance to make things right may have prompted the developers to think in terms of punishment vs. rehabilitation. To further establish the religious connection, the announcement concludes with a quote from Thomas Aquinas, the noted Christian theologian of the 13th century: “Justice without mercy is cruelty.”

Throughout the article, then, CCP reinforces the Christian symbolism. Perhaps they also had in mind some Biblical passages:

Regardless, New Eden may see formerly-banned players flying among the stars again, no longer cartoons in the cartoon graveyard.