Help Save the USS Texas with World of Warships

When Hurricane Harvey struck Texas this year, much of the area around Houston sustained flooding damage. Not escaping this was the battleship USS Texas which is moored along the Buffalo Bayou. Texas has been in disrepair for years, but the damage to the century-old ship from Harvey is threatening her continued status as a historical monument. For this month’s incarnation of Project VALOR, the publisher of World of Warships is inviting the players to help raise money to save the last of the superdreadnaughts.

The USS Texas was one of the most powerful warships in the world when she was completed in May of 1912, 105 years ago. She served with the Sixth Battle Squadron during the First World War, being attached to the Royal Navy. While there she became both the first US battleship to be equipped with Anti-Aircraft guns as well as the first to have flying-off platforms for planes. Modernised between the First and Second World Wars, her most notable action came during the Normandy Landings in June of 1944. Texas famously intentionally flooded her starboard bulge to induce a list allowing the guns to be elevated further and hit targets farther inland. After the war, she was turned into a memorial in 1948 and has hosted guests from around the globe since. She is the last surviving battleship to have fought in both the First and Second World Wars and is the only surviving ship from the pre-Washington Naval Treaty dreadnaught era. 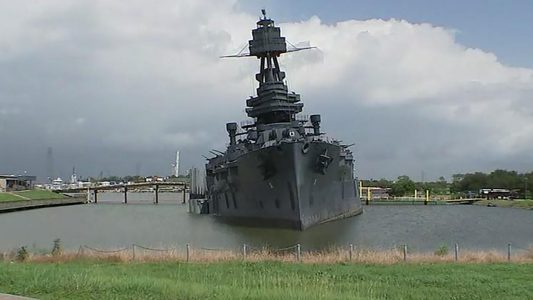 USS Texas is closed until further notice after taking on more than eight inches of water.

Throughout the month of November, Wargaming is offering a handful of bundles in support of the efforts to save the Texas. In these bundles are various items ranging from a Project VALOR flag to the in-game version of the Texas, which has a special camo inspired by the state flag. 100% of the proceeds from sales of these bundles will go to the efforts of the Battleship Texas Foundation to get the ship into a safe and permanent home. The bundles for World of Warships are located here, with a review of the ship by Wargaming Community Contributor LittleWhiteMouse is here. More information about the Battleship Texas Foundation is here, with a link to donate directly to the foundation here.