What follows is the opinion of the author and does not constitute an official statement from KarmaFleet, the Goonswarm Federation, or the Imperium. Spotlight and thumbnail from sov.space.

On May 22 at approximately 2340 EVE time, the last Goonswarm Federation (GSF) Territorial Control Unit (TCU) in the north fell. The systems of Y2-6EA, MQ-NPY, and HPS5-C, all located in Pure Blind, were captured by Mordus Angels. In game terms, this meant that GSF no longer held any systems. The largest alliance in the Imperium was off the map. The hostile forces currently fighting the Imperium rejoiced and began the victory lap around the various forums, both in public and (I assume) in private. On the GSF side, this same event was met with a resounding “meh”. Quite the difference in reactions. From my perspective, that of a GSF line member, I can see the symbolic aspect of removing the last GSF claim. As a practical matter however, it does nothing to change my day-to-day activity in EVE.

Before the war began, I had a fairly normal EVE routine. My real life schedule prevented me from being around for most fleets during the workweek, so I would spend the time I could be on nestled away in or around JU-QWQ and rat the evenings away hanging out with Theta Squad. On Friday night or Saturday morning, I would jump-clone down to our staging system and go on fleets over the weekend. Come Sunday night, it was back into the warm home of JU- via jump clone and back to making money. Outside of a temporary relocation to Pure Blind to help raise ADMs around 3V8-LJ when staging first moved there, this was how I played EVE. It was a lot better then running missions in High-Sec and I was genuinely enjoying my experience. As the clouds of war began to gather, things began to shift for me as well. 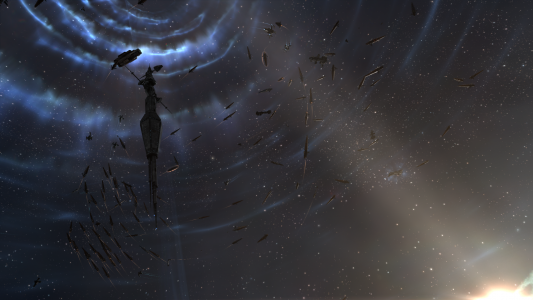 The first big swing was when Theta Squad was asked to relocate to Pure Blind to again help raise ADMs. While the move was in no way required, as a practical matter if I wanted to stay part of the active squad and operate under the safety umbrella of multi-boxed carriers, I needed to move. This time we would be basing out of 93PI-4, one jump away from the new staging system of Saranen. Gone was the separation of jump-cloning down for the weekend to go on fleets, which as fleet activity picked up was a good thing. Gone also was the relative safety of JU- and the surrounding systems. My ratting activity fell off sharply as roaming gangs became more frequent. While the major carrier ratters would sometimes stay out, bolstered by the safety of a large EHP pool and a cyno, players in Ishtars or Vexor Navy Issues like myself had to be much more cautious. After this process continued for a couple weeks, with criticism of the deployment becoming more vocal, Theta Squad leadership ended the formal deployment to 93PI. Myself, along with several others, packed up our ships and moved back to JU-.

Things had changed in Deklein by this point as well. The relative safety I had enjoyed prior to the deployment was gone; the Ishtar that had never failed to get back home in Pure Blind was lost mere hours after returning home to JU-. Around this time it was also becoming clear that the war was changing. Before it had been something that was important, but not viewed as a threat to home. Now it was becoming more and more apparent that not only was the war not going well for the Imperium as a whole, but that home may be coming under threat. Life continued for a short while after that, until one evening in Theta coms the discussion turned to the war. We had just received permission to rat in D06H-Q, a system in Fade that GSF held sov over, as it was an important midpoint to move large assets around between Saranen and Deklein. Gang activity from Pandemic Hoard’s attack on SpaceMonkey’s Alliance territory spilled over, but we were going to make it hard for them to take that critical midpoint. As we huddled in the station, somebody who knew more than the rest of us said “We will not be able to defend Deklein. It might be a good idea to start moving stuff out now.” I spent the rest of the evening ferry flighting my important ships down to Saranen. Deklein fell about two weeks later without much resistance.

The change in our effective control over our sovereign space had a major effect on how I have participated in EVE over the last few months. Gone are the days of ratting while chatting with friends, undocking into massive brawls has replaced this as a possible nightly activity. Even while GSF continued to hold sovereignty in Deklein, I was figuring out how to eak out a economic existence in low sec, a problem I have still not entirely solved. The moment when GSF lost sovereignty was, in my opinion, several months ago when we could no longer control the skies of Deklein in the way we had prior to the war. That moment was when I was forced to change how I play EVE, the event of losing formal claim means almost nothing.

While the above is my personal story, I’m sure it holds a common theme for many GSF members. Despite what the map has said, GSF lost its practical hold over its sovereign territory long before the last TCU fell. Our ability to use the space in the way we had grown accustomed to was disrupted in advance of stations flipping and Infrastructure Hubs being destroyed. Outside of the occasional effort, such as the C-OK0R pocket, efforts to maintain practical control of sovereign space have been limited for a long time. To the hostile forces, the celebration is deserved. You managed to assemble a coalition capable of knocking the Imperium out of our space and in both practical and actual terms you have done just that. That celebration does not mark the end of the war. While the actuality of our sovereignty being removed from the map is a major symbolic victory, from a practical standpoint it means very little to an average line member like myself. We have been without for some time already, and this war is far from being over.