On August 27 at approximately 19:15 EVE time, a Ragnarok belonging to President Skro0b was shot down by a force of dreadnoughts, stealth bombers, and black ops ships. Additionally, a Wyvern belonging to Jessie42 was killed. 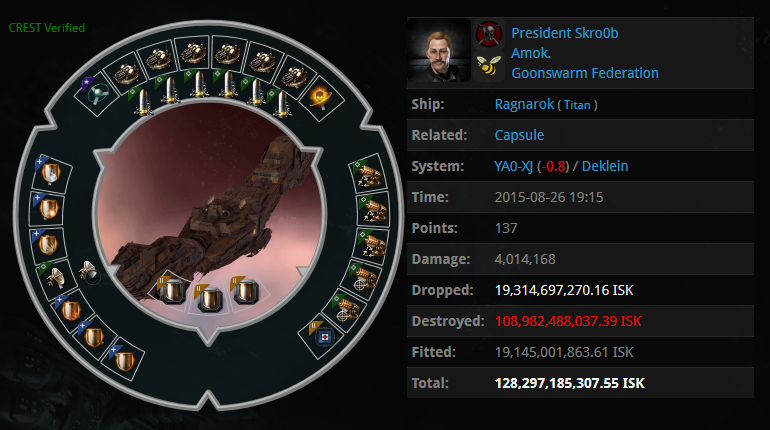 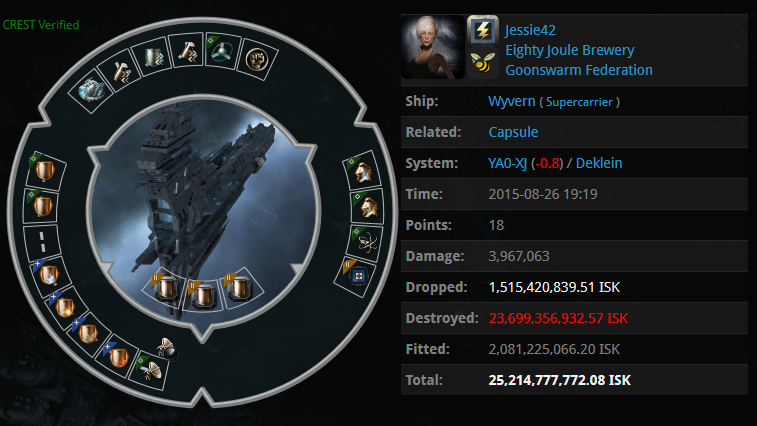 Most notable about this kill is the fact that it took place in YA0-XJ in Deklein, the beating heart of the Goonswarm Federation. Not only that, this kill happened right on the undock of the only station in the system.

According to witnesses, there was a station timer being affected by an Entosis Link and was being dealt with. However, Skro0b allegedly warped in to the fight intent on helping. However, due to his lack of a cyno beacon, he was made short work of.

When the titan loss was reported, The Mittani himself pinged the GSF Jabber, exclaiming,

The titan pilot was interviewed by TMC contributor Anehii regarding his titan loss:

TMC > So give us a little background, how did you end up on the YA0 undock with a cynoless titan?

President Skro0b > Well another imperium member, I won’t name names, warped to the station knowing that there were hostiles in system.  I was getting ready to stand down for the day.  We were about to get ready to jump on some dreadnaughts. So my friend warped to the station and said, “There’s a bubble on the station, I am going to light a cyno,” and he asked If i could come help. And I am thinking, sure why not, were in YA0, there could already be a cyno there, I thought I was landing on a cyno.  When I warped to station the bubble was 90km off the station and I landed on the station away from the Cyno. This is where I made a mistake.  I took my time to warp out, I probably could have jumped or warped at a lot of opportunities. I was on field for a short while. I took a pop shot at some things then aligned to warp out is when I got bubbled and everything else happened from there.

TMC > What was going through your mind while you were getting bubbled?

President Skro0b > Just to overheat my hardeners, try to give good intel if I could, try to figure out if there was anything close enough that I could easily refit off of.  That’s about it.

TMC > Did you immediately regret not having the cyno fit?

President Skro0b > No, I mean, I had a smartbomb fit incase we were being bubbled and I had a doomsday with a full DPS fit in case we were being dropped, and I figured I was already going to be on a cyno so it would’ve be fine.   I think my biggest regret is not asking for better intel.  I am still a new titan pilot, so it is definitely a mistake to remove the cyno, I know that now, and when I have my new titan fit I will definitely always fit a cyno.

TMC > How long did you have your titan for?  If we look back at your recent killboard it is looking like you are #bringingbacksolo

President Skro0b > Oh yah…I had that titan for probably about 3 weeks.  When I got the titan I thought to myself I was going to fly it like a cruiser and just have fun and not worry about it.  And you know what, if it gets killed, it gets killed, but I am going to have fun flying it until it does.  I always joked around when I first started getting serious about getting a titan that my own titan would be my first titan kill, and it was.  Kinda funny.  I do not have any regrets.  I live in Deklein, I can rat more ISK in a day than most people make in a month so it wont be too long before I rat up another one.  Maybe this time I will get a Levi, who knows.

TMC > So what happened with the wyvern that died alongside you?

President Skro0b > Wyvern-bro is a hero, he was the first to warp in, although he warped in too late, as I died.  Just got targeted and neuted…so he was going to die.  That really sucks for him, I guess my next biggest regret is the wyvern loss because the wyvern guys is going to have to wait a little while as another ship is in build for him.  He won’t have his shiny toy to fly around and that is partially my fault.

TMC > So next time you think you would try to have first hand intel if possible?

President Skro0b > With all of my normal pilots I would use to escort my titan around being deployed, I was limited.  I was also really sick, so I wasn’t thinking super clearly that day.  I am still a little sick, even before I wasn’t doing a whole, having a hard time focusing, feeling pretty ill, so when the whole thing happened I was already pretty sick and so my judgment was pretty impaired.  Took some bad intel for granted…lost a titan.

TMC > What was the reaction you got from your friends?

President Skro0b > Oh..I think it was really expected that I kinda fly loose and have fun so I mean no one was really surprised, everyone’s definitely bummed, but you know what I am going to farm up another one probably…maybe not, maybe I won’t buy it right away, maybe I will buy one later.  Who knows what CCP will be doing supercapital changes and what-not.  Build costs might change, a lot of things might change, who knows?  I have a little while to save, I could probably save up in about 3 or 4 months if I really gave it any effort.  What are you going to do, it’s just a ship that you can fly and have fun.  I got to do a lot of fun stupid shit with it before it died, not a long times worth, but definitely memorable.  I will probably be harder pressed to lose another one if I get one just from learning from losing this one.  Also after flying a titan, I am finding it is very different from flying other caps.  I am generally an experienced capital pilot using carriers, supercarriers and dreads but the titan was different in a lot of ways.

TMC > Do you think you learned a lot from this?

President Skro0b > Definitely there were a lot of things learned.  I went down really quick, the guy that warped to station in his carrier should not have done that.  He should not of asked for help from a titan.  There were a lot of things that just started wrong from the beginning.  And then the bad intel, and then the no cyno on the titan.  I was asked for help, I said yes, and I probably should have said no, but I am usually hard pressed to turn down help when friends ask.

TMC > Is there anything else you would like to say?

President Skro0b > Who dropped on me again?

TMC > Out of sight and others, did you see the video?

President Skro0b > It was a well organized jump from those space bros, they deserve it, well played.

Jessie42 suffered a similar fate as well, dying near the undock to the combined might of Out of Sight dreads.

These events occurred as GSF, and the wider Imperium, are engaged in an invasion of Providence.