GOLEM DOWNED BY ROOKIE SHIP (WITH A LITTLE HELP)

Yesterday, on June 16 at 05:26 EVE, a Golem piloted by Solarsquirrel was destroyed on a lowsec undock by a pirate rookie ship flown by Raikia Nardieu, and the station’s guns. 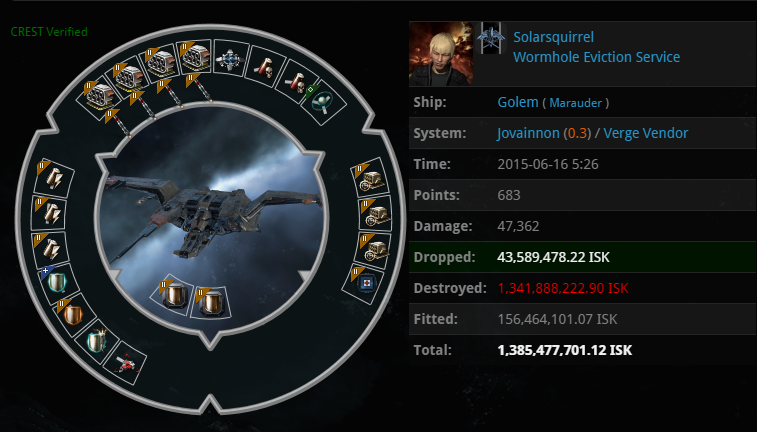 As you can see, the Golem is not fit terribly, at least for PVE, and could have tanked the sentry guns almost indefinitely. So, how did it die? Perhaps a self destruct as the pilot realized he was tackled by a Shadow Cartel pilot close to their HQ?

I have been theorising about this ever since I saw the mail and eventually got in touch with both pilots involved to shed light on the matter. Without further ado, over to Raikia:

“The guy warped to the station and landed 1km away and decided to shoot a crane that made him start taking station guns.  I just landed on the station in my Immolator because I was moving some ships (because who ever would actually use the Immolator), so decided to go for it and started bumping the guy off.  He never even tried to shoot me and tried to deagress, but I somehow managed to bump him (maybe he was freaking out? I’m not sure).  Then he decided to log when local plussed and I had called some friends to help.  When I saw he logged, I asked to keep it solo :-).

It appears the Golem pilot was not aware of his lowsec geography. The station he aggressed on is one jump from the HQ of Shadow Cartel on one side and Tuskers on the other. This is not what you could call a benign environment, and I can imagine how quickly the Shadow guys came pouring out of Aeschee when the tackle was called.

Solarsquirrel was good enough to respond when I asked him for his side and sent me this:

“Power went out after redboxing on station :/ Never pvp in bad weather!”

So there we are: a combination of bad luck and very slim odds brought you this fairly unique killmail.