THE GNOSIS: A USER’S MANUAL

(Author’s Note: Special thanks to MonsterMashn for the photo help, and the folks of Sickology for the info about their Gnosis fleets.)

With the celebrations of Fanfest and EVE’s 10th birthday now a pleasant, hazy memory, I figured it was time to take a look at the most interesting gift given to all capsuleers, the Gnosis.

The Society of Conscious Thought’s Gnosis-class cruiser is typically used as an exploration, research or training vessel and is well equipped for such activities. It is even better prepared, however, to guard such tasks from interruption and sabotage. Although The Society generally frowns upon violent behavior, extreme (and often, extremely violent) methods are taken to protect its own vessels and the secrets they may carry. This mission of acquiring, deepening, and sharing knowledge is key to the philosophy of The Society, and is well-served by the capable and fearsome Gnosis.

The lore does not explain how we capsuleers managed to get our grubby mitts on so many of them. I can only imagine a prominent industrial member of The Society tried to join a large nullsec bloc and decided that letting strangers jump freighter his stuff was a good plan. Or something like that, I’m not a lore person. Onto the fun part! 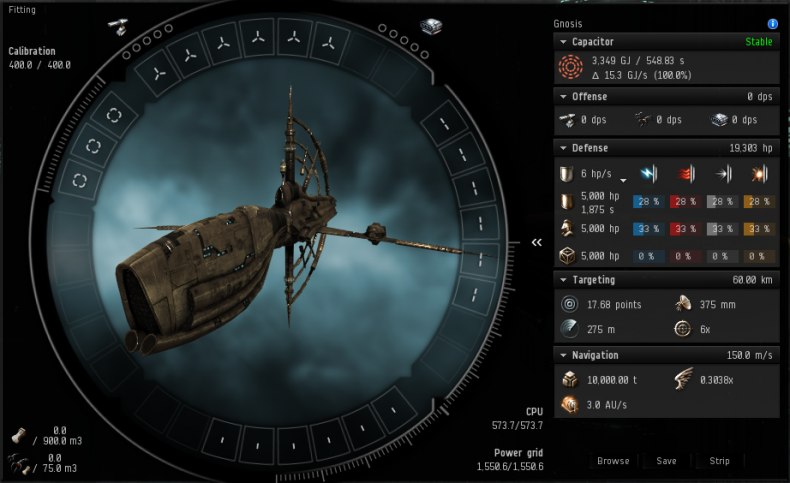 (I realize that these numbers look a little strange; I have a Genolution set in the clone I used to take the photo. And no, I don’t have perfect skills.)

The Gnosis’s slot layout is an incredibly versatile 6/6/6 with 5 turret and 5 launcher hardpoints. This, paired with the large variety of bonuses, makes the Gnosis the most flexible ship in the game, bar none. “Duh, Twyn,” you must be thinking by now, “tell me something I don’t know!” Some of the less obvious attributes of the Gnosis are its immense cargo bay (it can fit a pair of packaged frigates with T2 expanders and T1 cargo rigs, or a stunning 37 Navy 800 cap boosters) and its downright freakish agility.

With perfect skills, an unfit Gnosis has an align time of 4.2 seconds. For comparision, the next best Battlecruiser align time belongs to the Talos (pre-Odyssey nerf) at 6.1 seconds. Going down a class, the Stabber aligns in 5.3 seconds, the Thorax in 5.2, and the Caracal in 5.1 seconds. Finally, we get to the Thrasher, the next largest ship, with a 4.2 second align time. You read that right folks; the Gnosis aligns like a destroyer, and this is before you fill any of its 6 lowslots with nanofiber.

Of course, this is only agility. The Gnosis’s most glaring weakness is its speed. With perfect skills and a 10MN MWD, the Gnosis tops out at 1415 m/s (2029 m/s overheated). That’s not exactly slow, but you’re not going to outrun much more than a Drake either. Speaking of the Drake, the closest analog I’ve been able to find to the Gnosis is the old PODLA Drake (a 2 nano, 2 web kiting Drake). In my opinion, the two share the same fighting style, using their decent speed to pull range, and then using the utility mids and agility to slingshot onto a new trajectory if anything manages to catch up. And with that, let’s take a look at a couple of quick-and-dirty sample fittings. 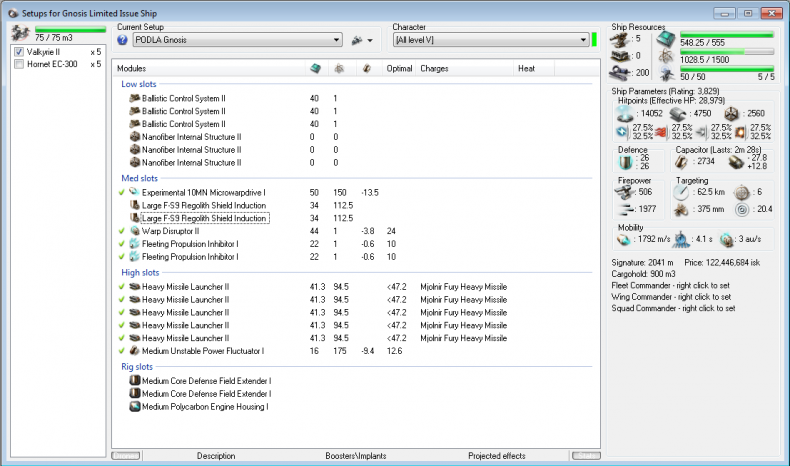 As said earlier, this is how I would fly the Gnosis solo or in a very small gang/wolfpack. Use your agility, speed and webs to keep out of reach, and if you bring a wingman or two, take turns tackling to spread the damage out. This fitting packs 506 DPS (561 overheated) that you can apply from 47 km, with the utility of double webs and a medium neut, all of which you can run for over two minutes. If you shut the neut off, you can kite around for 5 minutes, even more if you pulse your MWD and coast at 1792 m/s (2569 m/s overheated). Of course, this is all before Loki boosts, at which point things start to get a little absurd. However, if you favor more straightforward brutality, consider this next fit. 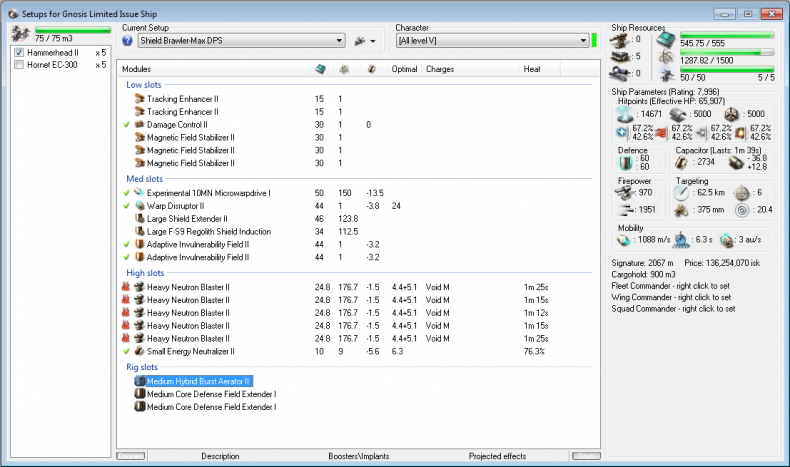 This would be the max gank fitting without incurring the wrath of the 4th damage mod stacking penalty. I chose Neutron blasters for their raw damage, and to show that you can fit pretty much any weapon you want on here. The 970 overheated DPS can easily push past the 1000 DPS mark with some cheap implants. You also have a pretty nice chunk of EHP, and the boosted omni-resists work great with friendly logistics, overheating to 73k EHP. You could also drop the relatively cheap T2 damage rig to get a total overheated EHP of 81,695. If you get the urge to pimp things out a little, with three T2 rigs and a pair of CN invulns, you can get to 95k EHP with heat, before fleet boosts, and still dish out one hell of a beating. 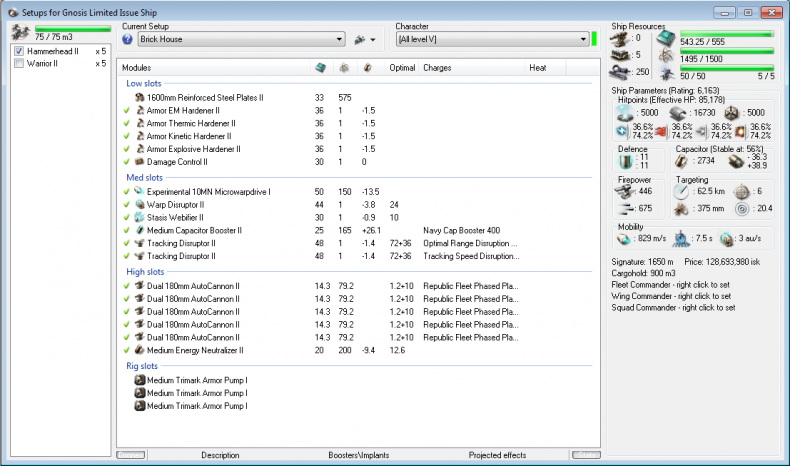 Speaking of beatings, the Gnosis does a pretty good imitation of a brick with the natural omni-resists. You can easily fit a healthy tank, with the generous slots allowing for hardeners of each type, in addition to a large plate and damage control. With heat, this fit gets 106k EHP before gang bonuses/links. The 6 mids allow for a wide variety of electronic warfare or other utility mods to further support your fleet. Finally, the Gnosis recieves the Battlecruiser ability to fit a gang link, and can bring one to the fight without too much trouble.

Lastly, on paper the Gnosis appears uniquely suited among non-Tech 3 cruisers for lowsec exploration. The flexible combat bonuses, plentiful mids, probe strength bonus and agility to GTFO if need be would seem to make an excellent exploration vessel, if a rather shiny one. It will be interesting to see how the exploration changes coming with Odyssey affect the usage of this limited edition vessel. Perhaps the inclusion of 5-run BPCs with the 10th Anniversary Collector’s box will provide collectors and fitting enthusiasts alike one more chance to get their hands on another hull before the Gnosis starts to become a collector’s item.

However you fit your Gnosis, it’s a fascinating ship that will surely have some interesting applications down the road. The fits demonstrated here were painted with fairly broad strokes, and I would love to hear what you guys have been doing with yours in the comments below.