You, TMC reader, have presumably played Eve before. Therefore, I implore you, for your own sake: DO NOT PLAYADVENTURE CAPITALIST, which is available on non-Chrome browsers, Steam, Google Play, and the Apple App Store. Escape while you still can.

AdVenture Capitalist is a game about watching bars fill and numbers go up.

Wait, were you expecting more?  Nope.  That’s it.  I just described the entire game to you. Bars fill, and numbers go up. You can click on individual icons to make cookies launch rockets or something, or you can hire managers to do it for you automatically, rain or shine, asleep or awake, or whether the game is loaded or not. This is catnip for people who monitor the progression of all their pilots on Evemon and just get a sense of satisfaction watching skills finish. 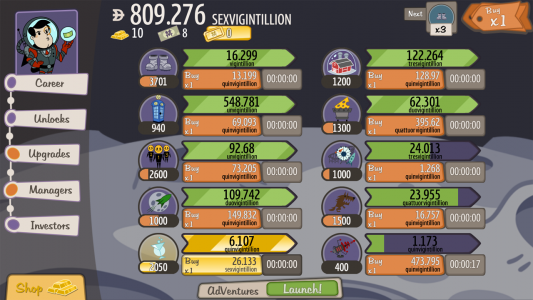 And you also learn how to count really high!

Now, obviously, the game would quickly get, uh…boring…if it was just a linear increase in profit through a linear increase in cost, so to make things interesting, each unit that you purchase costs more than the previous one (clearly, the developers don’t understand the Costco model).  So how do you compensate? Well you use your hard-earned funds to purchase upgrades which change the multiplier of your profits, allowing you to also earn on a non-linear curve. Of course, if you really wanted to speed things along, they have a handy cash shop wherein you can purchase massive upgrades which will make bars fill and numbers go up really fast.  The crawl march towards infinite profit must continue. 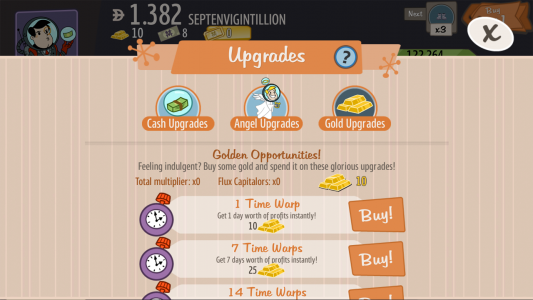 I’ll get there someday if I buy enough of these upgrades.

Of course, you can cheat the game by just turning off the game and your online connection and then setting the clock far, far into the future.  But that would just be dishonest, and who wants to cheat at this game? Plus, there may be unintended consequences when you decide to violate the natural order.

I wish I can explain why I feel compelled to “play” this “game.” It is a primal urge that compels me to wake up earlier than I normally do to make the proper purchases to make bars fill faster. To come home from work and gaze upon the massive unused pool of resources, ready for me to reinvest. To reach the next tier of profit before bed so I will wake up to really large numbers. In writing this, and not counting the screenshots I have taken, I have tabbed back into my instance of the game dozens of times to make sure I have been purchasing additional upgrades as they unlock. I also make sure to monitor the progress on Earth, the Moon, and Mars, all of which are drastically different from each other in how to progress. The Moon is my favorite. Mostly because it is the most profitable, you see.

Eventually, once apathy sets in, the game will become what it was meant to be in the first place – an idle progression game.  Your check-ins will become less frequent over time until you simply forget about it. But one day, as you scrub your phone of apps or clean up your Steam library, you will see AdVenture Capitalist. And you will load it up. And you will see numbers you didn’t realize existed.

The cycle will begin anew.