Eve: Valkyrie – Welcome to the Warzone

Today is a great day for Eve: Valkyrie—the new Warzone expansion is coming with a load of improvements and new stuff! What? You did not hear of it? You do not even know what Valkyrie is? Let’s fix this planet-sized hole in the hull of your knowledge!

Eve: Valkyrie is a spinoff from Eve Online. The action takes place in the same universe, just like Dust 514, but in space, just like Eve. In fact, you are even more in space than in Eve Online, as you are a “space fighter pilot”, literally.

Originally developed for VR, this space shooter will make a Valkyrie pilot out of you. These pilots control small manned spaceships (around the size of a heavy drone in Eve) dogfighting around the huge stations and fleets we all know from Eve. Of course, you can play in various types of hulls from light fighters to heavies, and of course, the support class. 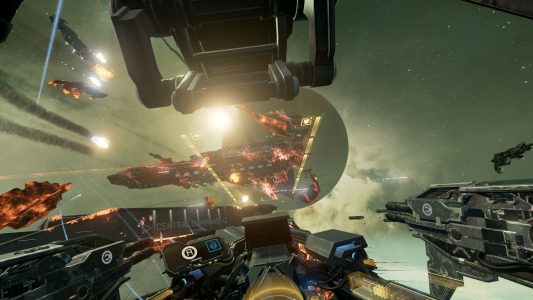 In terms of gameplay, Valkyrie used to be VR-only, which gave an extremely immersive experience. Pilots are brought together in teams that fight over objectives in a 3D map. They are several game modes (and detailing all of them is not the purpose here), but from its humble start of two repetitive game modes, Valkyrie has blossomed into a respectable first-person shooter with a broad variety of maps and modes.

Valkyrie is a buy-to-play title with microtransactions for cosmetics, but all updates and expansions, like Warzone, come absolutely free.

This HUGE update is opening the game to non-VR players! Not only that, but players on any platform — PC, PlayStation 4, standard monitors, and any VR headset of your choice — will be able to play together on the same servers! Valkyrie was one of the first games to offer cross-platform VR support between Vive and PSVR users, and this trend of compatibility is continuing strongly with Warzone.

Another new feature is the ability to create a squad with your friends to play together, though this option is platform-bound: a PC player (VR or not) can only squad up with another PC player, not with a PS4 player.

The other headline features are classics for this kind of game: two new maps based around a Sisters of Eve station and a Drifter Station; one new game mode called Extraction, that is an objective game mixing combat and piloting abilities, and of course, a rebalance of the ships along with new ones.

Until now, Valkyrie has had three classes, each having several hulls with different abilities: Fighters, Heavies and Supports.

Fighters are agile and fast, lightly armed and defended. They come in different flavours, from pure fighter to “healer,” with EWar and mixed types around. Heavies are generally slower, but well defended and pack stronger weapons systems. Meant for control, they are excellent in setting in a place and locking it down. The last class, Support, is pretty much self-explanatory: buff allies, shoot enemies and get out using EWar as needed.

All these classes will still exist, but pretty much all the existing ships are reworked. Note that the Fighter class has been renamed the Assault class. Along with this huge rework, new ships and classes are added, like for example Covert ships.

Videos about four classes (the three base ones and the covert one) have been released, such as this one about the Covert class.

Ships now have a primary weapon, two abilities/secondary weapons and an Ultra.

The minimum recommendations for the game have been updated, and as you can see here below, for non-VR users the requirements remain reasonable.

For newcomers, there is a launch pack called Drifters, available on Steam/PS Store. You can find more details here.

For those who already own the game, all in-game unlocks and pre-order bonuses will be carried over into the new system once the update goes live at around 1600 UTC.

If you are still on the fence, Imperium News will happily provide you with a hands-on review soon, and we will be covering our launch experience live on our Twitch channel from 1700 UTC