EVE? Never heard of her

In a world… where nobody has ever heard of EVE Online

Picture if you will, you are getting ready to see this summer’s big Sci-Fi blockbuster with your friends at the local cinema. The lights dim and the trailers start rolling and flying across the screen is a spaceship headed into a huge battle. Suddenly that ship emits a burning bright beacon and dozens upon dozens of giant combat ready space ships warp in from nowhere around this beacon. An assault begins as these mesmerizing but deadly machines slice through space and go head on with an enemy force.
You hear a pilot giving commands, directing his team where to mass their fire, and which enemy to target next. Ships are being torn apart on both sides by salvos of missiles and small fighter craft are weaving around ships to get in on the action. The bass in the theater is pumping, lights are flashing across the screen, and there you are: glued to the action while you throw popcorn in your mouth. Finally, words appear on the silver screen and read “EVE Online. Now free to play.” You think to yourself ‘Wow, I can’t wait to play this new game.’
There are two things you have to realize with this scenario, however. The first being that EVE Online is not a new game, but in fact a game that has been played for more than a decade. You just have never heard of it. Second, you can exhale because this is something (as far as we know) that you will never see. To be honest, I can’t recall ever having seen an advertisement for EVE Online in print or video.
Now before you start auto-raging at me in the comments section about how there are thousands of EVE Online videos on Twitch and YouTube, or how you see EVE banner ads all the time on websites, hear me out. Those videos that you see are, for the most part, player=generated content excepting release trailers, FanFest/EVE Vegas recordings, and The o7 Show. As far as I and other fans can remember or dig up, there hasn’t been much of a presence made by Crowd Control Productions (CCP) except for this 30-second trailer that was played during a commercial break for an episode of Battlestar Galactica back in 2008, “So say we all”. Similarly, all of the website banners that you have seen are directly related to your own internet browsing history and nothing to do with the game developer advertising intentions. After all, what do you need to see ads for? You already play the game.
In regards to that trailer, much was said about it in a forum thread where someone was asking the same questions I’ve been trying to pinpoint as well. One player, TigerXtrm, commented that “I think that commercial should get a prize for least effective advertisement campaign in the history of anything. If that was meant to sell a product I don’t think they could have done a worse job…”. To that, I couldn’t agree more. However, there were many players who share the sentiment in that forum thread and in discussions I’ve had with other players that EVE Online doesn’t need advertisement because our word of mouth is the best method for recruiting new players. To that, I couldn’t disagree more.

Where do these people come from?

Around 2008 when the SyFy channel was displaying this ad spot, you can see a jump in player rates. See the below EVE-Offline.net snapshot. 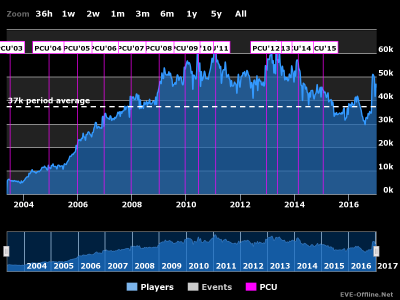 This jump more than likely was from new eyes seeing the world of New Eden for the first time. A few years later, in 2010 and 2011, as video game streaming started to take off and showing large battles with thousands of players live, player count again spiked. Every EVE blogger and news site was talking about these battles, but more importantly so were major non-gaming news outlets that headlined articles about large scale corporate theft, the announcement of Dust 514, and the famed Monocle-Gate scandal. All of those incidents made real headlines at a time when the story-line was really taking off and new content was coming out in major releases.

In 2012, the community mourned the loss of an influential player, Vile Rat. Known out-of-game as Sean Smith, a US State Department official, killed in the attack on the consulate in Benghazi. Again, EVE online was in the news, albeit for a tragedy, and there was another spike in the number of active users.

Fast forward to 2014 and the Bloodbath of B-R5RB. It blazed across the typical game news sites as well as business and technology news sites, spurring another spike in player activity. CNN mentioned EVE Online broadcasts, written about by BBC and Wired Magazine, and is a constant for sites like PC Gamer.
It almost seems that whenever EVE Online is in the news, there is a player uptick. Call it science or magic, there seems to be some sort of correlation there. Still, the only press that seemed to be circulating about the game was coming from sources other than the developer itself. More importantly, most of the news produced about the game shows players in a negative light like we are all a bunch of thieves and psychopaths.

The most recent debacle of press and advertising gone wrong is in the release of one of EVE Online’s biggest change in the history of the game. The developers added a free to play model with a lower tiered clone state after 13 years of the game being online. And yet, there was no paid advertising placed in any magazine, newspaper, or television. The current player base—at least the ones who paid attention to the EVE “meta”—were aware of the impending update, but new potential customers had no idea. Worse, however, were the headlines by websites and blogs such as “EVE Online Goes Free-To-Play, Hopes to Salvage Player Base” and “Why free-to-play could save EVE Online”. They insinuated that the game was dying and needed saving by adding the F2P model. Again, besides YouTube videos and blogs on the EVE homepage, there was no real formal advertising campaign to announce this amazing new update that would revolutionize the entirety of the game.
Coupled with the lockout of so many characters during the two-factor authentication requirement roll out and the still buggy “New Player Experience”, the news of going free-to-play got somewhat lost in translation. While there was an immediate influx of perhaps tens of thousands of new players who either never heard of the game or avoided playing because of the monthly subscription, it has since tapered off and is now back to a “normal” concurrent player count. As far as the player base goes, we know nothing more about the future of the game now than we did prior to the Ascension release besides a few minor tweaks and bug fixes here and there. Still CCP and its developers have given no indication that they plan on releasing any type of mainstream advertisements. Not only that, some of the developers have expressed that they have plans to advertise once they work out all of the bugs of the expansion. Wait, what?
I have to say that I do not believe that EVE Online is dying. Far from it in fact: I believe that the game will continue to be online for another decade or more. A game with such a strong cult following will never die. Even if The Mittani himself has to put the servers in the basement of his mansion to keep the game going until 2116 and beyond. It will not die. I do, however, strongly believe that there could and should be a more concerted effort by the people who make this game that we love so dearly to market this game more positively and to a wider audience.
There is no reason that when you tell another gamer you play EVE, they say they never heard of this 13 year old game. It’s time to stop trying to keep this game a secret. Time to stop pretending that we need to keep our world locked up and specifically “niche”. More importantly it’s time to stop thinking we need to be an exclusive “community”. If we want EVE Online to best game in the history of the games, more people need to know about it.

Kael Decadence is a host of the Mind Clash Podcast, the head honcho behind Project "EVE an Hour", and a member of the Entropy of Annihilation corporation in EVE Online. In real life, Kael is an active duty Soldier in the U.S. Army and has 6 chickens. Real ones.