So, you’ve decided what ship you want to fly – time to figure out how to fit it. There are many options for each ship, but they are not all equally effective. Much of what makes a good fit depends on the situation. Are you mining in highsec or nullsec? Are you mining by yourself or in a group? These are good questions.

The first distinction to be made is between mining lasers vs strip miners. Mining lasers are only used on mining frigates or on other ships that are not bonused for mining. Any mining barge or exhumer cannot use mining lasers as they require a turret hardpoint in order to be equipped.

The upside of this is that they are replaced by something even better – strip miners. Strip miners come in a few different varieties. You have your run-of-the-mill Strip Miner I’s, which require training Mining IV to use, but Mining is a 1x skill, so it is a fast train. Strip Miners are only usable on Mining Barges and Exhumers – and they mine a great deal more than mining lasers. 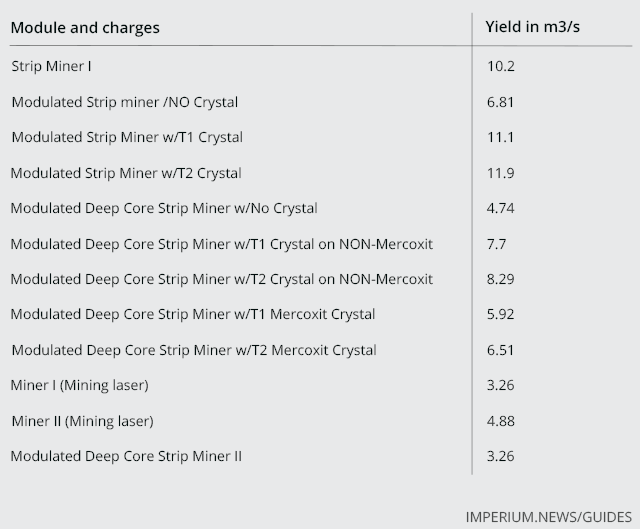 There are quite a few conclusions one can draw from the above chart:

One problem most miners have wrestled with is the issue of balancing tank and yield. When max yield fits tank considerably less than even moderately tanked ones, along with the delight some people get out of hunting and ganking miners – how much tank you need vs how much yield you are willing to sacrifice is an important question. The answer is, as usual, dependent on the situation and how much risk one is willing to take.

If you are mining in highsec – you need to be prepared to sacrifice a great deal of yield for tank in order to survive a ganker rich environment. The following two fits are recommended to discourage solo gankers (even those multi-boxing multiple DPS ships for ganking) – they are unlikely to kill them. (Though, if you piss them off, people will go to extraordinary lengths to gank you).

If you wish to use a tanky fit in nullsec – see the above highsec tanky fit. It is that sort of fit which is wonderfully multi-purpose. In nullsec, you have a reasonable option of skipping the tank-driven fits of highsec for max yield fits.

Please note: Nullsec is a different animal than highsec. Highsec is generally crowded with a lot of players who are unknown to you. The danger in highsec is the unknown intention of this multitude. In nullsec – any reasonably sized alliance should have a decent ability to safeguard its space. In the Imperium – intel channels, defense fleets, standing fleets for mutual protection, and utilization of comms helps improve safety and the general situational awareness that allows reasonably safe usage of max yield mining ships.
If you decide to go max yield, you sacrifice a great deal of tank. Should you get caught out – for whatever reason (inattention, wormhole spawning, etc) you will likely die. Max yield miners weigh the cost of a ship or a fleet of ships against the long-term increase in yield, as well as their ability to react to hostile threats. They also consider their ability to kill rats in the areas in which they mine – nullsec rats are considerably harder to kill and defend against, but nullsec miners are also generally working with the people they are mining beside, so cooperation in the defense against and killing rats is far more likely to occur.

This being said – here are some max yield fits for use in nullsec:

Please note – the EHP on the hulk is around 16.8k with all skills to V, there is not actually enough CPU to have much wiggle-room in the fitting. If one wished, there is some that can be done with expensive fits, though the EHP increase is generally not considered worth the increased price tag.

This fit costs over a billion isk – compared to the 300m or so of the previous hulk fit. The EHP is 27.5k – an increase of around 11k EHP for more than triple the cost. This example is given to illustrate how bad the fitting and tank on a Hulk is, it is not recommended the reader use the bling fit.

For those who desire max AFK instead of max yield – the following fits will be of interest:

These fits are for the mining barge/exhumer that is bonused for ore hold size. They are built on a basis of max yield but without the bonuses of the Covetor/Hulk so they mine a bit less. However it takes much longer to fill their holds, so offer the greatest time between having to deal with ore holds of all the mining barges/exhumers. Please note that since the ore hold is a specialized hold – expanded cargo holds will not increase its size.

The above fits will generally work for ice mining – one simply trades out the strip miners for Ice Harvesters and the Mining Laser Upgrades for Ice Harvester Upgrades. This means you can use the same ships for ore mining that you use for ice mining – though having a separate ship is not a completely bad idea – being able to jump clone to the correct system with the ice belts and have the ships already there is excellent – traveling through space in mining ships is generally a bit harrowing. If one has a dedicated ice mining ship – one should consider replacing one of the Medium Core Defense Field Extenders with the Medium Ice Harvester Accelerator I – you may need to add a fitting rig in order to fit everything properly.

If you only want to mine Mercoxit in a Procurer – here is a skill plan for you:

Rorqual fittings and plans are covered in elsewhere in the guide.

Eve Online – A Guide to Mining