Today CCP Games released EVE: Gunjack on Steam with HTC Vive support for $9.99. Gunjack was previously reported to receive Vive support “later this year,” which in CCP terms apparently means three weeks. CCP also announced today that EVE: Valkyrie will be released for the HTC Vive in 2016. Since Gunjack and Valkyrie both use the Unreal 4, engine perhaps “in 2016” will happen much sooner than December.

EVE: Gunjack is a first-person arcade shooter designed for virtual reality headsets. You play the part of a turret operator – a gunjack – who is trying to protect a mining barge operating in the Outer Ring region of New Eden. There aren’t many levels in Gunjack, although there are rumours of level expansion packs in the works. Gunjack is meant to be a game you can just “pick up and play” for short periods of time; The controls are limited to a reload function, a weapon selection function, and two fire modes. Your turret points where you are looking, so this game requires a lot of head movement. 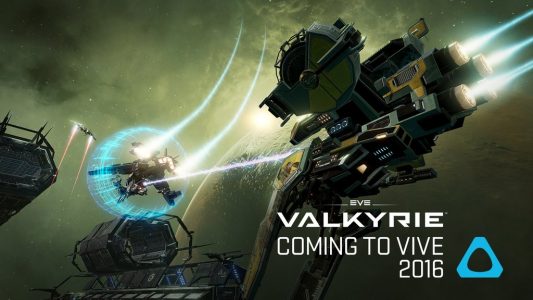 EVE: Valkyrie is an award-winning dogfighting game set in the EVE universe. You play the role of a fighter pilot aboard a carrier and you battle other players in arena style combat. Valkyrie offers skill-based character progression with both multiplayer PvP and single-player PvE gameplay, and has some of the highest quality graphics of any VR title currently available. Valkyrie is designed to be a seated VR experience playable with a gamepad. It reportedly also works with HOTAS and other joystick setups. Valkyrie was bundled with Rift preorders, and a founder’s pack is currently available for $59.99. Pricing for the HTC Vive version is not available at this time.

Valkyrie will include optional microtransactions in addition to its initial purchase price. The in-game store will include vanity items like ship skins, decals, and interiors. The store will also include XP boosters which probably operate similar to those found in other games such as Dust 514 and Planetside 2. The boosters can be somewhat controversial because they allow players to progress through the skill system faster than players who don’t pay real money. CCP has no plans to make Valkyrie free-to-play at this time.

The first HTC Vive orders are arriving in consumers hands today and many new SteamVR titles also released today. CCP was smart to release Gunjack to coincide with these other events. After the recentprivacy concerns raised about Facebook and Oculus, it is good to have alternatives.